Because we live in the United States of America, we have to take personal responsibility for the frustrated, heavily armed men who will occasionally barge into our schools, malls and workplaces and murder everyone in sight.

To that end, the Eureka Police Department will hold a couple of training sessions for the general public on Thursday, March 3. These sessions are titled “How To Survive an Active Shooter Incident,” and they’ll be cosponsored — no fooling — by the Humboldt County Office of Education.

Everyone should go to one of these trainings. There are afternoon and evening sessions to choose from. They are absolutely free of charge.

Bottom line? It’s not, like, 100 percent certain you’re going to be caught in the middle of a mass shooting anytime soon. But when the bullets start flying you’re going to feel pretty dumb for having missed out on the training.

Hey, one question? In all seriousness? You know how everyone says that the only solution to bad guys with guns is more good guys carrying guns? I have a question about that.

Good Guy A says to himself, “Lock and load. I got this.” He pulls out his concealed carry pistol, takes aim at the bad guy and squeezes off a few rounds.

Meanwhile, Good Guy B — whose view of the bad guy is obscured, maybe — hears people screaming, sees Good Guy A firing, fails to notice that Good Guy A is wearing a white hat rather than a black one, mistakenly assumes therefore that his fellow good guy is the bad guy, and so plugs him square in the forehead with his own weapon.

My question is: Doesn’t it seem like this will definitely happen, sooner or later?

Perhaps we will put it to the trainers. The sessions will be 1-3 p.m. and 6-8 p.m. at the Humboldt County Office of Education’s Sequoia Conference Center, 901 Myrtle Ave., Eureka. For more information, contact Suzie Owsley at 441-4371 or sowsley@ci.eureka.ca.gov.Poster below: 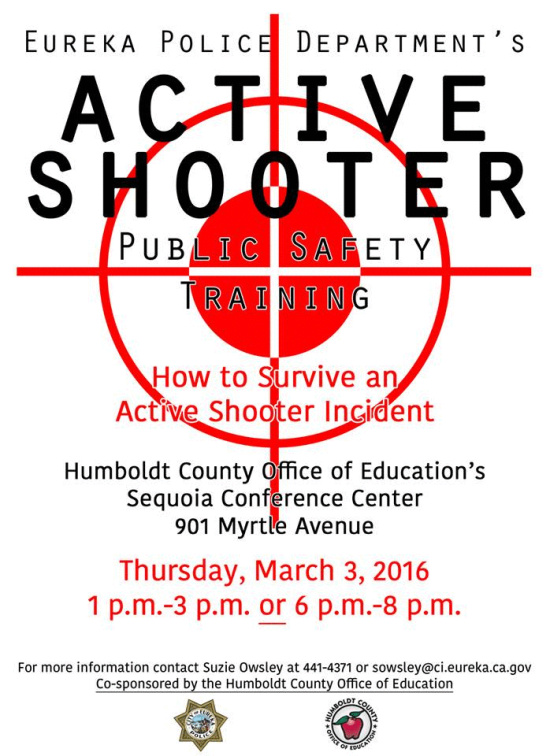