« Meth Found in Redway Hotel After ‘Most Wanted’ Woman Arrested 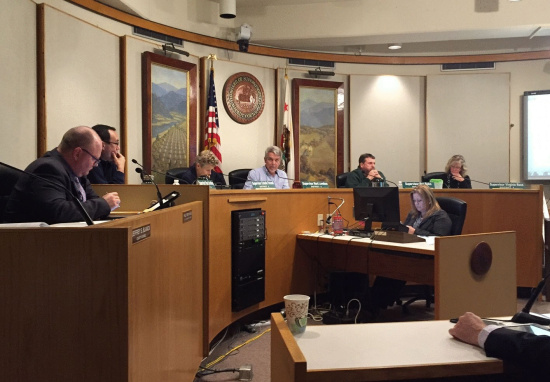 The Humboldt County Board of Supervisors today directed staff not to allow new medical marijuana cultivation on timberlands. That was one of a variety of decisions made as the board finished giving staff direction on a list of policies to be included in a rushed Medical Marijuana Land Use Ordinance (MMLUO), which the board hopes to get implemented before March 1.

As previously reported, that’s the date listed as the cutoff to establish local ordinances in new statewide medical weed legislation, the Medical Marijuana Regulation and Safety Act, though Assemblyman Jim Wood is attempting to have that deadline erased.

Today marked the board’s third hearing in eight days on this issue, and according to the tight timeline this was its last opportunity to make significant policy decisions on such key issues as whether to allow generators and trucked water for cannabis grows as well as the size and location of indoor and outdoor grow operations allowed under three tiers of county permits.

The timberland growing decision was arguably the most closely watched. Staff’s original draft of the ordinance called for banning new grows on land zoned for timber production (TPZ) along with forest resources (FR) and unclassified (U). The Planning Commission changed that in its review of the draft, opting to allow grows on timberlands. But staff came back to warn the Board that doing so could spell trouble under state environmental law.

These deliberations come in the wake of serious allegations levied against county planning staff by the Humboldt County Planning Commission. At its Jan. 7 meeting, multiple planning commissioners expressed anger over the staff report prepared for the Jan. 5 Board of Supervisors meeting.

As first reported by Daniel Mintz, Commission Chair Robert Morris said he was “completely outraged” at what he saw in the report. He and other commissioners said the report didn’t reflect public comments and staff direction given during the 10 meetings the commission held on the MMLUO.

The report, prepared by senior planning staff, argued that many of the policies proposed by the commission were too permissive to pass muster with either the county’s general plan, the California Coastal Commission or a Mitigated Negative Declaration (MND), an environmental document that asserts a project will have less than significant impacts under the California Environmental Quality Act (CEQA).

As if anticipating the Planning Commission’s reaction, the report noted to supervisors that “the pace of the [Planning Commission] hearings … did not allow for staff to provide the Commission with contemporaneous comprehensive review and analysis of the implications of the recommended changes with regard to CEQA, General Plan consistency, and Coastal Act conformance. That review is incorporated in this report for consideration by the Board of Supervisors.”

But Planning Commissioners weren’t buying it.

“[T]hat topic [MND and general plan compatibility] came up several times during the commission meetings, raised by several members of the public, and so we queried staff on that,” Morris said at the Jan. 7 meeting. “And I was confident that when we had done our work, we had done our work within the bounds that we should have been doing.”

Commissioner Lee Ulansey also expressed dissatisfaction with the report. “I’m not really sure what meetings the preparers of the report attended, but it certainly wasn’t the meetings that I attended,” Ulansey said. “It was just hugely disparate.”

He went on to say, “it appears that there was a deliberate bias” in the report.

Before being appointed to the Planning Commission, Ulansey and Morris co-founded the Humboldt Coalition for Property Rights (HumCPR), a corporation dedicated to loosening restrictions on private property. “I personally feel that I have a real trust and confidence issue at this point as to whether or not we can count on our decisions to be carried out,” Ulansey said.

Morris suggested taking a straw vote to indicate whether the commission still has faith in county planning staff, but the vote was postponed over concerns about California’s public meetings law, the Ralph M. Brown Act. The commission plans to revisit the issue at its next meeting, and recently appointed Interim Planning and Building Director Rob Wall said he’d like the opportunity to investigate these “serious” allegations.

“I would at least like to look into this matter, and the veracity of it,” Wall said. “Certainly, at my first Planning Commission hearing, getting a vote of no confidence on some key staff members isn’t probably the best way to go, so I’m glad for Ralph M. Brown right now.”

The Planning Commission’s argument is founded in part on its assertion that the Board of Supervisors was not satisfied with the original draft of the MMLUO prepared by staff. Over the last two days the board has indeed loosened some of the restrictions from that draft, but not to the level recommended by the Planning Commission.

For example, the original staff draft called for allowing existing grows of up to 2,000 square feet with a zoning clearance certificate or special permit issued by staff, with grows larger than that requiring a Conditional Use Permit, which involves review before the Planning Commission.

The Planning Commission, in contrast, proposed allowing outdoor grows of up to 20,000 square feet with only a zoning clearance certificate and grows larger than that — up to the state limit of one acre — with a Conditional Use Permit.

Fourth District Supervisor Virginia Bass was initially reticent to allow 10,000-square-foot grows without a Conditional Use Permit, but she ultimately voted with the majority. At numerous times during the deliberations, the board noted that these decisions are likely to change and change again in the coming months and years and state regulation comes into effect and the realities on the ground become more clear.

“It will be constantly evolving forever,” Lovelace said of the ordinance.

The timberland growing issue was initially even more contentious, though after much discussion the vote wound up being unanimous. Senior Planner Steve Lazar began by defending staff’s contention that allowing grows on timberland would be hard to justify under a mitigated negative declaration.

“It just is untenable under this current level of environmental review,” he said.

Bass and Lovelace signaled their approval of the staff recommendation, at least during this initial iteration of the ordinance, but Fifth District Supervisor Ryan Sundberg and First District Supervisor Rex Bohn expressed a desire to allow new grows on timberland — if not on TPZ then perhaps on forest resources (FR) land.

Second District Supervisor Estelle Fennell asked for more clarification on FR-zoning. And she noted that the Farm Bureau, for one organization, isn’t thrilled about the idea of existing grows on TPZ land — meaning people who have deliberately broken the law — would get a path to legitimacy under staff’s recommendations while law-abiding FR landowners wouldn’t be allowed to enter the industry legitimately.

But Lovelace made an impassioned argument about the CEQA process, saying there was no way to assure the state that allowing new grows on timberlands wouldn’t have a significant impact on the environment. Natalynne DeLapp, the executive director of the Environmental Protection Information Center, also made an urgent plea to the board to go along with staff’s recommendation. She said the issue of growing marijuana on timberlands is both legal and philosophical, and agencies such as the National Oceanic and Atmospheric Association, California Fish & Wildlife and the California Board of Forestry should be allowed to weigh in before the county green-lights such activity.

After some discussion about the differences between TPZ and FR zoning, even Sundberg agreed to go along with staff’s recommendation.

“I’ve pushed you guys as hard as I could on this,” he said to county staff. “You’re not breaking, so I’ll waive the white flag.”

The board also considered indoor cultivation, which brought out a bit of a cultural divide within both the weed-growing community and the board. Several public speakers defended indoor growing as the birthplace of much of the industry’s innovation as well as an extremely common (and profitable) practice throughout Humboldt County. But Fennell said indoor growing arose largely in an attempt to avoid the attention of law enforcement, and as an agricultural product it rightfully should be grown outdoors.

“There’s an argument made that indoor is better, but I’m not buying it,” Fennell said.

“I’m reluctant to say that marijuana has become the new redwood,” Bohn said, “but it’s something to say if we’re going to [create jobs].”

Fennell pushed back. “Looked what happened to redwood,” she said. “I would like to see Humboldt County go away from the boom-and-bust cycle.”

Ultimately the board decided to table the idea for now and perhaps return to it when it revisits the ordinance in the coming months. Supervisors voted 4-1, with Bohn dissenting, to allow indoor grows of up to 10,000 square feet, as well as manufacturing and distribution on parcels zoned industrial or commercial, as long as operators obtain a conditional use permit and operate at zero net energy or with a full carbon offset. They also voted to allow indoor cultivation in existing structures of up to 5,000 square feet on lands zoned for agriculture. Grows up to the state limit of 22,000 square feet will be considered as part of master planning process with full environmental impact report.

The board also discussed a proposed “retirement, remediation and relocation” program that would offer incentives to people with existing grows on less-than-ideal land to relocate their operations to areas chosen by the county as preferable cultivation spots. This program would offer a “multiplier,” giving growers the right to double or even quadruple the size of their operations if they agree to move.

The board went on to tweak some other policies, allowing grows on parcels with slopes of up to 15 percent on those relocated grows, rather than staff’s recommendation of nine percent, and softening the language on a pesticide ban to allow for the possible acceptance of “natural” pesticides allowed under organic certification, among other changes.

In a 3-2 vote, with Lovelace and Fourth District Supervisor Virginia Bass dissenting, the board decided to allow grows in these “ideal cultivation sites” to be up to 10,000 square feet. Both Bass and Lovelace said they were uncomfortable going that high on the size limit. The staff’s recommendation was 5,000 square feet.

After much discussion about the sorry state of local roads, the board chose to strike a requirement that new grows be located within a mile of a paved county road or state highway.

The initial staff draft called for a prohibition on diesel, gas or propane generator use, but the board asked staff to modify that to allow generators with limits on decibel level and hours of operation. Supervisors then approved a staff recommendation to ban trucked water except in cases of strictly defined emergencies, a move Second District Supervisor characterized as one of the most important decisions made on this issue. With this provision, she said, “There will be much fewer of these fly-by-night operations trucking water [and] stealing water.”

The board initially thought today would be the last day to see or consider policies in the ordinance until it sees the final staff draft at its Jan. 26 meeting, but after some discussion about planned attendance, the board realized it could take a look at the staff draft at its Jan. 19 meeting and request small changes be made before Jan. 26. But the board can go no later than that in its deliberations if it hopes to have the ordinance in place by March 1.