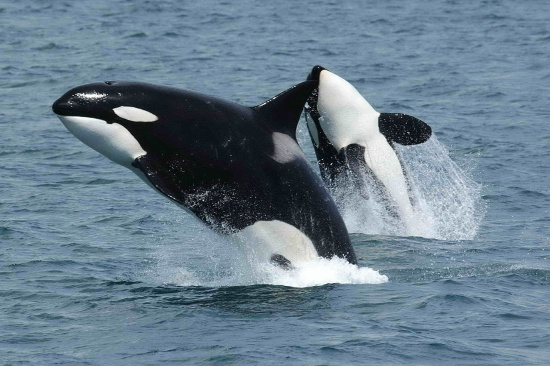 A pod of killer whales is currently swimming south off the Oregon coast at a clip of roughly 60 miles per day, which means they might be visible from certain vantage points here in Humboldt County over the weekend.

For the past three years the Northwest Fisheries Science Center in Seattle has used a satellite transmissions to track the winter migration of a group of southern resident killer whales (SRKW) known as the K pod. On New Year’s Eve an adult male called K33 was outfitted with a transmitter. He was traveling north out of the Puget Sound at the time, and on Jan. 7, after a trip into Canada’s Straight of Georgia, K33 and his pod (they almost invariably keep together) started sprinting south.

The latest update, posted earlier today, showed that the pod rounded Cape Blanco in southern Oregon just this morning. And there’s a good chance that another group, L pod, is making the trip with them. The map below shows the pod’s progress over the last week or so. 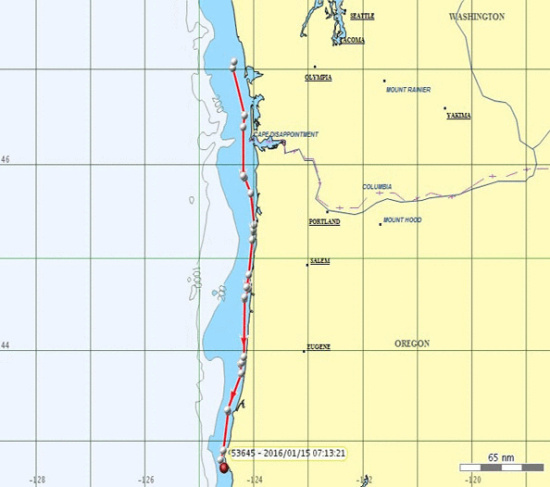 Local marine mammal biologist Jeff Jacobsen tells the Outpost that these killer whales have been making their annual pilgrimage through our waters, often pausing off the mouth of the Eel River to forage for salmon.

“Over the last three years now they’ve been tracked by satellite, and they’ve come all the way down to Point Reyes, then turned around and come back,” Jacobsen said. “One time they screamed down here like a forced march, rested off Cape Mendocino and went back.”

The “sea pandas,” as they’re sometimes affectionately called, might be four miles offshore when they cruise past, or they may come in nice and close. In one recent year they came right past the jetties, Jacobsen said.

The intense drought over the last few years could spell trouble for the blackfish. Rivers along the Pacific Northwest, Jacobsen notes, “were so low and so warm there will be very few surviving young salmon to go to sea to grow up to be [killer whale] food.”

The future is uncertain. Grab some binoculars or a telescope and go look for killer whales.

With El Niño churning up the sea and another storm system headed our way, it won’t be ideal whale-watching conditions, “but there is a chance to see them from high vantage points, like Table Bluff,” Jacobsen said in an email.