« (VIDEO) Man Travels to Eureka, Feels Lost, Makes a Video About It

Betty Chinn Gives Us an Update on the Blue Angel Container Village, a (Temporary) Home for the Homeless » 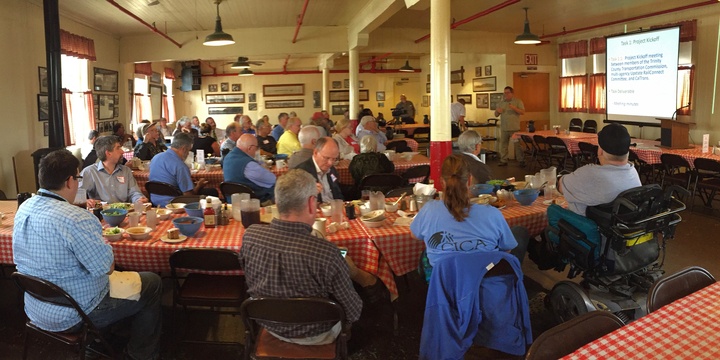 When Caltrans announced last month that it was awarding a $276,000 grant to the Trinity County Transportation Commission for an east-west rail feasibility study, many local train fans viewed it as validation, a vote of confidence in their dreams of Humboldt Bay becoming a major shipping hub connected to the national rail system via a newly constructed railroad. But in a presentation this afternoon to the pro-rail Humboldt Bay Harbor Working Group, a Trinity County official warned a group of roughly 60 people that the study will be an unbiased analysis of the facts, and as such it may well conclude that a new rail line is not feasible.

Richard Tippett serves as both the director of the Trinity County Department of Transportation and the secretary of the county’s Transportation Commission, the agency receiving the grant. He traveled to the Samoa Cookhouse today, and one of the first slides in his lunchtime presentation stated:

THIS IS NOT - A study to show/prove that a rail line is feasible.
THIS IS - A study to determine the feasibility of constructing a new rail line.
THIS MEANS - Trinity County starts out neutral and lets the facts bring the project to a conclusion.
ULTIMATELY - We know that there will be a large group that will not like the results, but will accept the conclusion based on the goals of being factual, transparent and inclusive.

With that explanation out of the way, Tippett went on to describe the planned scope and schedule of the study and outline the groups that will be involved in bringing it to fruition.

Here are a few of the facts he laid out:

Tippett noted that the timeline imposed by Caltrans’ — three years and three months — will be tight. The whole process, he said, is “get your butt in gear, get out the door and get it done.”

He also noted that he’s heard a wide range of opinions on this contentious issue, including letters in local publications. “It’s important that we be inclusive and listen to them,” Tippett said.