The Train Dream Lives! Caltrans Gives $276k in Public Funds to Trinity County Agency for Yet Another East-West Rail Study 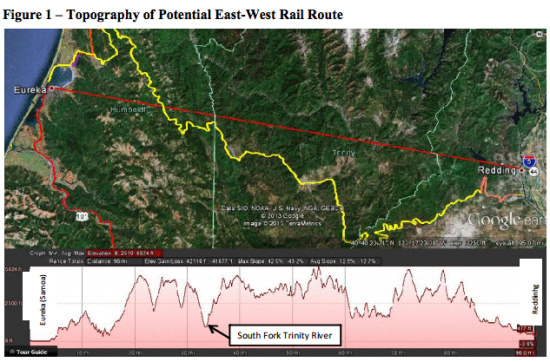 Image from a 2014 feasibility study on the east-west railroad by BST Associates on behalf of the Humboldt Bay Harbor, Recreation and Conservation District.

The California Department of Transportation, better known as Caltrans, today announced that it has awarded a $276,000 grant to the Trinity County Transportation Commission, which will spend that moolah studying the feasibility of constructing a brand new railroad from Humboldt Bay across the Trinity Alps to the Central Valley.

This windfall represents a victory for the rat king tangle of rail booster groups that, for the past five-plus year, has been tirelessly exalting the train as the last great hope for the salvation for our region’s economy. Various groups including the Upstate RailConnect Committee, the Land Bridge Alliance and the Humboldt Bay Harbor Working Group have traveled the region proselytizing the choo-choo gospel and holding out the collection plate.

Two years ago these groups convinced Trinity County officials to take the lead. In May 2014 the Trinity County Department of Transportation applied for $345,000 in federal money for a feasibility study, and as the Outpost noted at the time the application was riddled with dubious claims from a 20-year-old study. It also conspicuously omitted any data from more recent analyses, such as a 2013 study commissioned by the Humboldt Bay Harbor, Recreation and Conservation District, which found that it would cost more than a billion dollars to build an east-west railroad and up to $20 million per year to maintain.

That application bore no fruit, but today’s announcement shows that the train lobby has finally found a benefactor in the State of California.

“A new rail line connecting Humboldt Bay’s seaport with the national rail system in the Sacramento Valley has the potential to be a social and economic game-changer for Northern (Upstate) California, including Trinity County,” said Tippet. “Northern California faces a variety of social and economic challenges that would be improved by the fuller utilization of the seaport at Humboldt Bay. To better utilize this port, CalTrans is modernizing Highway 299 and the shipping channels have been deepened. Rail is the only freight transportation mode missing. Exploring feasibility of such a rail connection is what is proposed to be addressed by the grant.”

Supervisor Fenley thanked Caltrans for awarding this grant and for their support of Trinity County and the North State. “I look forward to getting back together with our multi-agency group to assist the TCTC with this study,” said Fenley.

“The Upstate California Railconnect Feasibility Study will provide public decision-makers and private investors with a package of information on which to make informed investment and business decisions regarding a new rail line connecting Humboldt Bay’s deepwater seaport with a national rail connection in the Sacramento Valley,” Fenley added.

The Scope of Work for this feasibility study was developed by the multi-agency group with the assistance of a CDBG grant obtained by the City of Eureka in 2012. The feasibility will include information on potential rail routes, additional uses of the rail corridor (e.g. trail, passenger service, redundant fiber optic, etc), economic benefits, environmental and cultural impacts, rail infrastructure design considerations, timeline and costs to develop, and more.

In addition to the grant, the non-profit organization Land Bridge Alliance (LBA) will provide $69,000 in matching funds and in-kind services to the project. LBA was formed to provide an open and publicly accessible venue for factual information related to the creation of a feasibility study which leads towards answering the question of viability of the newly proposed rail corridor.

“The need is for transportation options for freight and passenger uses, over a long period of time, upwards of a century,” said Trinity County Supervisor Bill Burton. “This transportation link would have many social and economic benefits and national implications.” He added “this project, if built, will have long term jobs implications, as well as business and tourist economic factors. As a first step, this study will help determine the potential costs of a built project.”