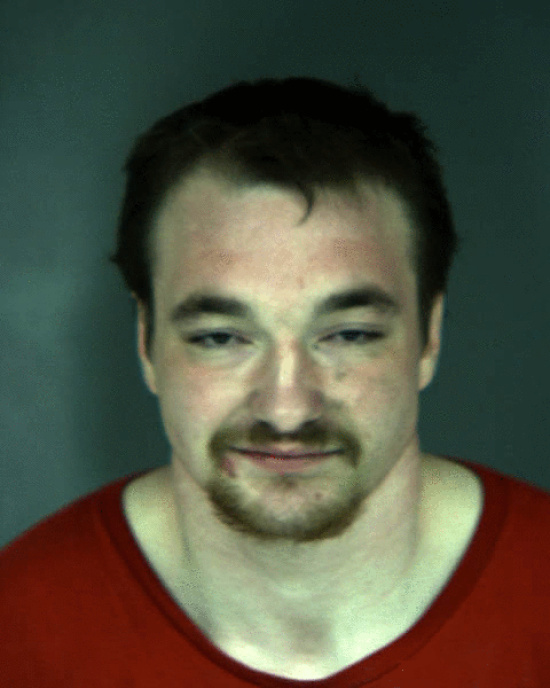 On Saturday, March 12, 2016 at about 7:25 a.m., Humboldt County Deputy Sheriff’s responded to a residence on SR 96, Hoopa, for a report of a disturbance. It was reported that 22 year old Michael Dylan Jensen was threatening his family with a “Bowie” style knife.

Twenty-nine year old victim #1 stated she and Jensen were asleep in bed when Jensen began mumbling incoherently. Jensen became increasingly agitated and made threats of killing himself. Jensen then exited the bedroom where he began arguing with 50 year old female victim #2. Victim #2 was holding Jensen and victim #1’s one year old child. Jensen knocked victim #2 down and attempted to grab his child from victim #2. Jensen made threats against both female victim’s lives and destroyed property in the residence. Jensen left the residence on foot and was wearing a red t-shirt and shorts, still carrying the knife.

Deputies and California Highway Patrol (CHP) Officers located Jensen on Cal Pac Rd. Jensen was in possession of a knife. As deputies approached Jensen, he stopped walking told deputies they were going to have to kill him. Jensen then fled on foot. Deputies caught up with Jensen and placed him under arrest.

Jensen was taken to the Humboldt County Correctional Facility where he was booked for assault with a deadly weapon, threats, child endangerment, exhibiting a deadly weapon, assault, and battery. Jensen’s bail has been set at $50,000.