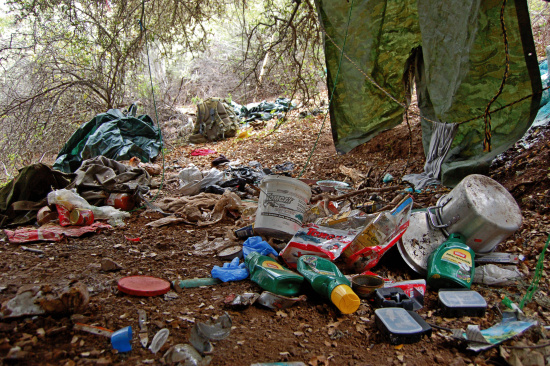 The following retrospective of the cleanup was written by Drs. Mourad Gabriel and Greta Wengert of the Integral Ecology Research Center, which participated in the effort, and mailed out by the Trinity County Sheriff’s Office this morning: 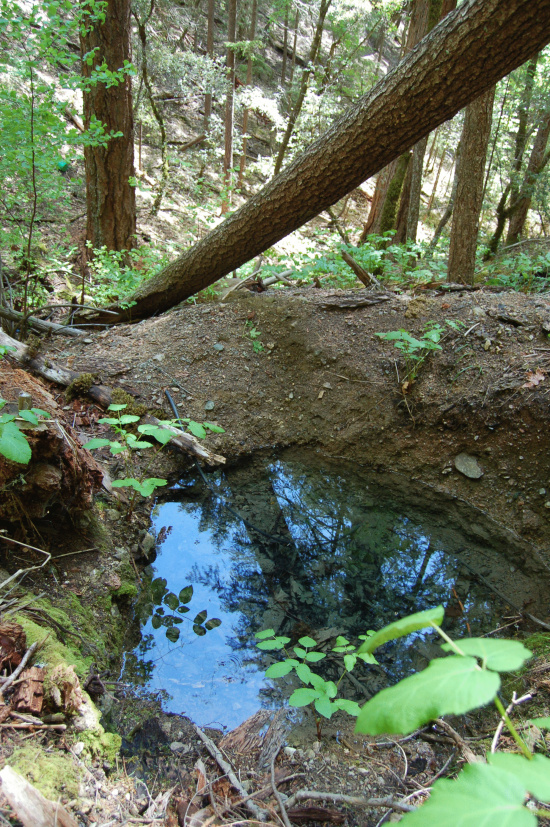 One of six springs destroyed in order to feed irrigation lines.

Northern California is home to numerous wildlife species which are dependent on the unique critical habitat attributes that public lands within this bioregion provide. Some species of conservation concern that inhabit this region include Northern spotted owls, fishers, and Coho salmon. It is also home to numerous terrestrial big game species including black-tailed deer, American black bear and elk.

Therefore, in addition to non-game wildlife benefits this area offers, game species are reliant on the large tracts of public lands in order to sustain viable populations for both natural resource and recreation use benefits. Specifically, all three Roosevelt Elk (Cervus canadensis roosevelti) hunt zones are located within this area. Unfortunately, northern California is also experiencing a sizeable amount of clandestine marijuana cultivation on public lands, much of it entrenched in prime elk habitat.

These illegal cultivation sites on public lands have a long list of deleterious impacts towards natural resources upon which many wildlife species are dependent. They divert large amounts of water, fragment landscapes in order to cultivate marijuana plants, and contaminate native plants, soil and water resources with either legal or illegal pesticides not intended for use in remote forested areas.

Finally, due to the clandestine nature of this activity, armed growers occupy many of these sites for several months who in turn poach and maliciously poison wildlife.

One of several loads of grow site infrastructure removed.

In 2015, a large multi-year public land trespass marijuana cultivation complex named Deer Lick Grow was discovered on the Shasta-Trinity National Forest managed by the United States Forest Service. Law Enforcement teams eradicated over 9,000 marijuana plants within the 2015 cultivation plots, and several nearby historical plots were also discovered. This site is situated in occupied Roosevelt elk habitat within the California Department of Fish and Wildlife (CDFW) Marble Mountain Elk Hunt Zone. For this zone, CDFW allocated 52 tags in 2015 (either sex, muzzleloader, antlerless and bull) for which 2,061 applicants applied . The success rate for these tags is significantly high with bull, antlerless and either sex having a 50% success rate and muzzleloaders 100% success.

One standalone factor for much of this success is the public land access for hunters using their public lands. However, this emerging clandestine and dangerous activity of marijuana cultivation on public lands poses a novel risk to not only hunters who want to enjoy a safe hunting experience, but to game species like elk that may either be poached or contaminated through the large amounts of toxicants used at these sites.

This complex is located in USFWS critical habitat for the threatened Northern Spotted Owl, occupied habitat for fishers and is also a refugia for state and federally listed salmon species like coho and steelhead . The complex also overlaps habitat occupied by several big game species such as Roosevelt Elk, black-tailed deer and black bear.

Specific funding for the reclamation of this trespass marijuana cultivation complex was provided by The Rocky Mountain Elk Foundation and a Section 6 grant from the US Fish and Wildlife Service to the California Department of Fish and Wildlife and Integral Ecology Research Center. 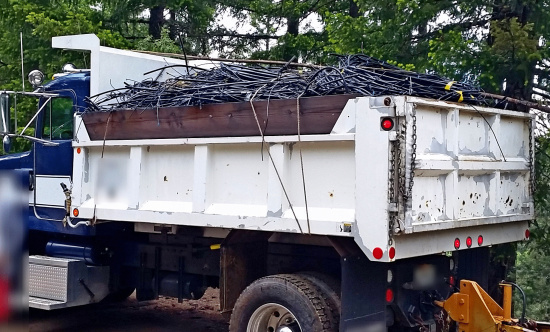 One of several loads of grow site infrastructure removed. 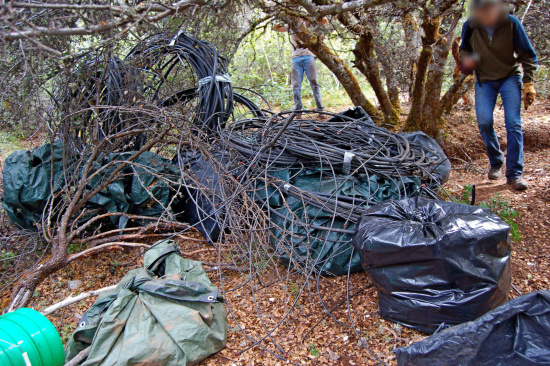 Trash and irrigation pipe from one of several cultivation plots. 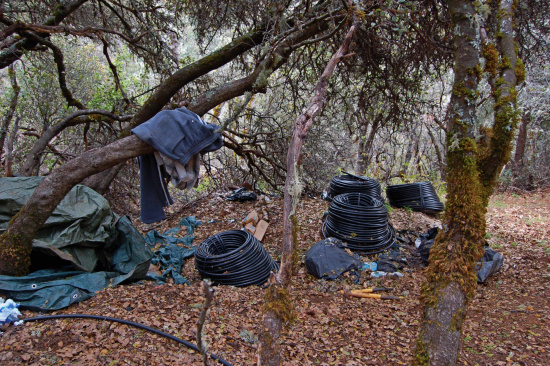 Over 5000ft of unused irrigation line ready to be distributed throughout forest. 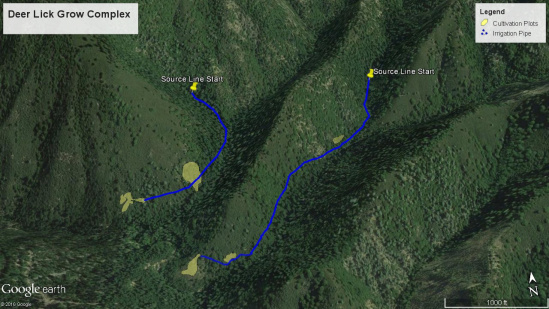