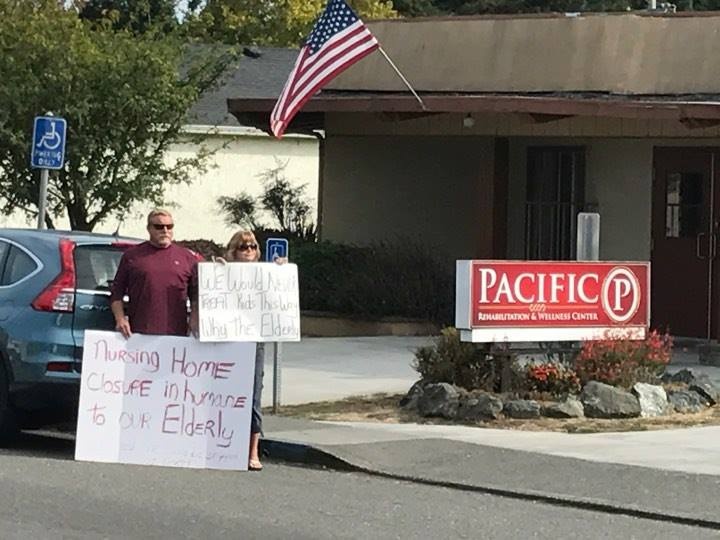 Thursday, on the heels of news that the state has approved Rockport Healthcare Services’ plans to close three skilled nursing facilities in Humboldt County, the Outpost spoke with Shlomo Rechnitz, the 45-year-old owner of Rockport parent company Brius Healthcare Services. Brius is the largest nursing home provider in California, controlling roughly one of every 14 nursing home beds in the state. Rechnitz said he had an open letter to the community that he wanted published in local media.

That letter, emailed shortly after our conversation, says the company is “only considering closure as a last resort.” It goes on to blame Rockport’s local financial troubles on a nursing shortage, which it attributes to the high wages offered in the marijuana industry. The letter also suggests that the community should shift its anger and recriminations to Partnership HealthPlan of California (PHC), the official care provider for Medi-Cal patients in the region. PHC, the letter says, has been offered the chance to take over the facilities free of charge and seems to have plenty of profits to pay for patient care. (You can read the whole thing below.)

The letter even lists PHP’s cash reserves and its earnings over the past two years. It does not disclose the corresponding information for Brius. Asked to provide the company’s earnings and reserves a spokesman replied, “[W]e have different investment groups for different groups of homes. I would also point that we are a private entity, rather than a non-profit that is contracted by the state.”

Brius: “What is relevant is our facilities in Humboldt County have lost $5 million over the last 18 months versus the fact that PHP [sic] has nearly $300 million of extra, unrestricted dollars. Also, those figures come from PHP’s own Board of Directors packet.”

There’s evidence, though, that Rockport has sizable profits of its own. The company recently submitted financial data to state regulators, revealing that its five Humboldt County facilities netted more than $5.4 million in profit from 2011 through 2015, as the North Coast Journal reported last week. The Journal also quotes a letter to state regulators from the National Union of Healthcare Workers. While the company did suffer a $1.5 million loss from its Humboldt facilities in 2015, the letter states, “In 2014, [parent company] Brius reported profits of $77 million from its California facilities in a report to the California Attorney General’s Office.”

In recent years Rechnitz’s company has been repeatedly accused of giving substandard care. The California attorney general called him a “serial violator of rules within the skilled nursing industry.” The Sacramento Bee has done a series of stories on Rechnitz, noting in one, “His facilities have become the target of police scrutiny, lawsuits, stiff regulatory fines and state and federal investigations that have uncovered numerous alleged violations.”

In 2013, for example, federal regulators reported a “serious deficiency” at Pacific Rehabilitation and Wellness Center in Eureka, finding that all 57 residents were in immediate jeopardy from the fire risk posed by seven portable space heaters running in resident care areas. That was just one of 50 serious deficiencies or problematic conditions found in Brius facilities in 2013-2014.

If Rockport does wind up closing its three Humboldt County facilities, the county will lose 258 of its 446 skilled nursing beds, forcing elderly residents to relocate in communities that may be hundreds of miles away. Senator Mike McGuire said Rockport was not a willing partner during recent negotiations.

“Rockport’s devastating closure plan is unprecedented – and will impact the lives of patients and their families, putting the health and safety of our most vulnerable residents at risk,” McGuire said in a statement.

Partnership HealthPlan of California issued its own statement yesterday, saying the agency worked with Rockport to try to avoid closure of the local facilities. The statement notes that Rockport did raise the possibility of selling or even giving away its local facilities. “However, Rockport was vague on what might be given away or sold,” PHC said. “We only learned Monday what exactly was being offered for free [the facilities only] and what might be sold [the underlying property], and the sale price was untenable for PHC.” Read the full statement at the bottom of this post.

Here’s the open letter to the community from Brius:

Recently there has been much doubt and uncertainty regarding the future of our five skilled nursing facilities in Humboldt County. You may have read about this issue in the local newspapers. Unfortunately, these publications don’t have all of the correct data and are only telling half of the story. Please understand that the last thing we want to do is close facilities and limit patients’ access to the care they deserve. In fact, over the last several years, Brius has saved 59 facilities from closure, sparing approximately 6,000 patients from the need to transfer to new facilities while also saving approximately 6,200 jobs in California.  We write this letter to help you better understand the challenges we face, as we hope that we can work together to find a solution. We are looking at the situation very seriously and are only considering closure as a last resort.

Brius has been serving this community with reliable nursing home care since April 2011. In the recent past, due to a growing marijuana industry that can afford to pay higher cash wages, we found ourselves with a shortage of nurses. In fact, this workforce shortage has spread around all industries in Humboldt County. As the hospitals get higher reimbursement than nursing facilities, they offered their employees a 30% raise over the next three years. We, on the other hand, are forced to pay for nurses from a temporary staffing company, which costs are enormous and unsustainable. In addition, the registry forced us to rent over 50 apartments for these “traveling nurses”. These nurses stay for 12 weeks and then move on to another city. In the last 18 months, as we were desperately searching for a solution, we have sustained a loss of approximately five million dollars. Furthermore, we project an annual loss of four million dollars in 2017.  Further, it is well-recognized that temporary staff have a negative impact on our goal to provide the highest quality of care. In the final analysis, everyone loses.

WHAT HAS BRIUS DONE TO TRY AND SOLVE THIS PROBLEM?

THE ULTIMATE SOLUTION TO THIS PROBLEM
The Department of Health Care Services (DHCS) entered into a risk sharing agreement with Partnership HealthPlan (“PHP”) where PHP is required to pay for all skilled nursing facility services required by its members. In other words, it is PHP’s full responsibility to pay for these nursing home patients. In fact, PHP is legally responsible to pay for these patients’ nursing home care. They have accepted responsibility for these patients after receiving annual payments from DHCS to provide healthcare for these patients. We have recently been made aware that PHP is claiming that we demanded a price that was too high. That is a complete misrepresentation. As we’ve stated before, PHP can acquire the business and operations free of charge. For the first time, only three days ago, they asked how much it would cost if they could purchase the actual five properties as well (which is not needed to continue operating the facilities). We didn’t understand why they would need that but nevertheless responded with a number. They then took that number and misled the public into thinking that Brius was demanding money for the business. We want to be clear again. PHP can acquire and operate these facilities free of charge.

CAN PHP AFFORD TO PAY FOR THESE PATIENTS?

PHP has a reputation of providing quality heath care coverage to its patients and we believe that its success will continue. PHP is an upstanding company whose leadership has its members’ wellbeing at the forefront. Unfortunately, an HMO can’t make money on every single patient. As in our facilities, there are times when the cost exceeds the revenue. While the situation is not ideal, one cannot shirk its responsibilities, and funding the care for these low-income, nursing home patients is completely PHP’s financial responsibility. It is their legal requirement.

Brius has offered these facilities for free to anybody who wanted them. There were no takers as they would face the same issues as Brius. We are seeking a temporary rate increase to address these increased staffing costs.

We encourage you to contact PHP and explain to them why they need to come through with a temporary raise, as the closure of the facilities is a sight that nobody wants to see.

And here’s the statement from PHC:

FAIRFIELD – We at Partnership HealthPlan of California (PHC) remain concerned about Rockport Healthcare Services’ plan to close three of its five long-term-care facilities in Eureka. We also want to make clear that our top priority is always our members, in this case the fragile residents of long-term care facilities.

Rockport has said that the closure is due to losses related to a shortage of nurses. While facilities in surrounding counties have not reported similar shortages, we already have worked to help alleviate Rockport’s losses. It is well-known that we have made efforts to assist Rockport, as well as all long-term-care (LTC) facilities. We have made efforts to pay LTC facilities more than the State pays them in three ways:

As PHC worked with Rockport to explore options to help avoid closure of three facilities, Rockport raised the possibility of sale or even giving away its facilities. However, Rockport was vague on what might be given away or sold. Due to concern for our members who would be displaced, we even considered the purchase of the distressed properties. We only learned Monday what exactly was being offered for free and what might be sold, and the sale price was untenable for PHC.

We are a community-based nonprofit that historically has provided and continues to provide high-quality health care at very low administrative costs. We take our fiscal responsibilities seriously and have reinvested surplus funds back into our communities.

Over the past two years, we have reinvested $122 million for our members and providers: for members, we have added a vision benefit and provided equipment to enhance dental care for special needs children and adults, among many other investments; for providers, we have increased reimbursement rates, including those for long-term care providers, including Rockport.

For more information regarding rate increases PHC has made to the Rockport long-term-care facilities, please see the attached document.