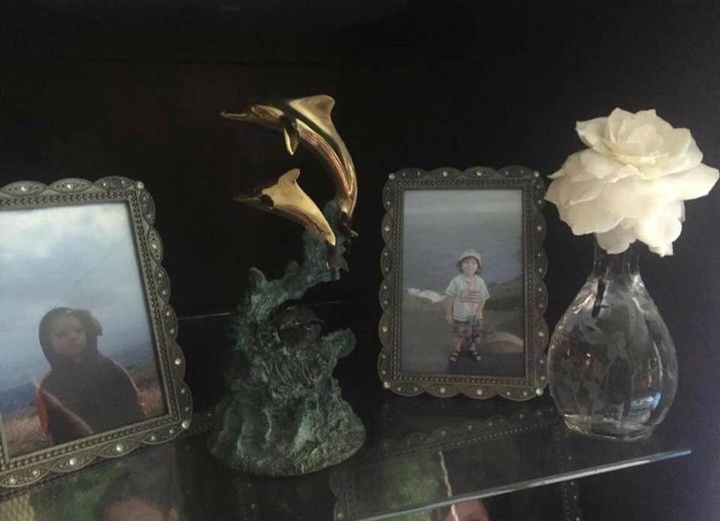 Photographs and the remains of Ryan Wagner (in dolphin urn), before the latter were stolen in a Westhaven burglary sometime in the last week of December. Photo: Submitted.

Somewhere in Humboldt County, someone is $5,000 richer after successfully ransoming the ashes of a dead six-year-old boy to his bereaved parents.

On Friday, the family of Ryan Wagner — a six-year-old boy who died in 2011 after a battle with non-Hodgkin’s lymphoma — were informed that the person or people who stole their sons ashes during a burglary in Westhaven were prepared to cut a deal for their return. The thieves would get the ashes back to the family if the family would give them the $5,000 reward they had offered for their son’s return.

On Saturday, after the deal had been done, Ryan’s mom, Anita Wagner, messaged the Outpost with some of the details of the transaction, and later posted them to the “Bring Ryan Home” Facebook page. She said:

On Friday the 13th the sheriffs department received a call from Kathleen Bryson a local criminal defense attorney saying that a client of hers had access to Ryan’s ashes and wanted to split the reward money with the thieves or else the people who had Ryan’s ashes threatened they would dump them.

We were told to gather the 5,000.00 dollars in small denominations because the individuals were paranoid of $100 dollar bills. We met with Kathleen Bryson who said she just wanted to help the situation and gave us the 500$ she was paid by her client and said she was doing this for free.

We handed her 5,000.00 with no real concrete security knowing she would return with Ryan. We waited 45 minutes for her to return with all of the belongings.

Although we are extremely happy to have Ryan back we are further more disgusted by the criminals behind this for holding Ryan ransom because the reward money basically went to the thieves.

We are still working with authorities and It is our hopes that these criminals can still be brought to justice.

When she contacted the Outpost last night, Wagner said there was not much else she could say at the moment, given that the criminal investigation of the case is ongoing. She did tell us, though, that the Humboldt County Sheriff’s Office was aware of and involved in the chain of events that led to the return of Ryan’s ashes. The family picked up the child’s remains at Sheriff’s Office headquarters in Eureka.

For her part, attorney Kathleen Bryson — who spoke to the Outpost this evening — said she takes issue with only one part of Wagner’s narrative: As far as she aware, she said, her client did not profit from the return of the ashes, and she doesn’t believe her client was involved in the burglary.

“I wouldn’t have fucking represented someone who was sharing in the reward,” Bryson said. “He was motivated because he heard that these people he knew were going to dump the ashes unless they received the reward.”

Bryson broke down when she spoke of the “sacred” nature of a loved one’s remains. Her own brother lost his life at 39, Bryson said, and his ashes are interred in her backyard. She said she hired a private investigator to accompany her to the handoff, and waived several Friday appointments to take the case pro bono, in order to help the Wagner family get their son back.

“At the end of the day, the burglars – I don’t know how they sleep at night,” Bryson said. “I know I slept really well last night.”