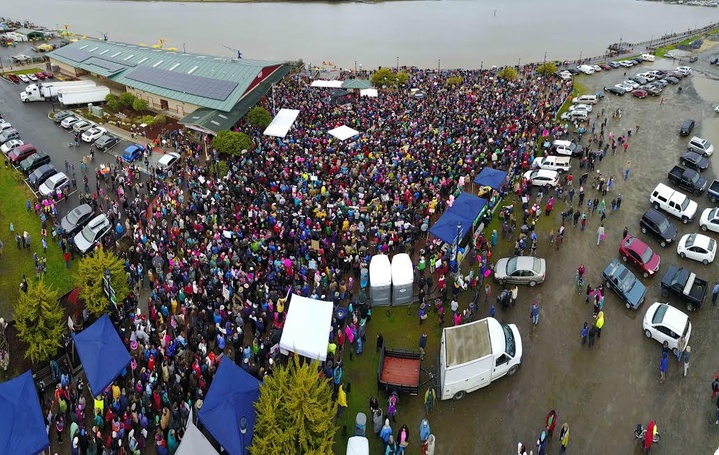 Eureka Police estimate that, all told, around 5,000 people participated in today’s festivities. If you’re still hoping to get some context to how many people marched in Eureka this afternoon, Thomas Dunklin sent the Outpost these drone stills of the group pre-march. 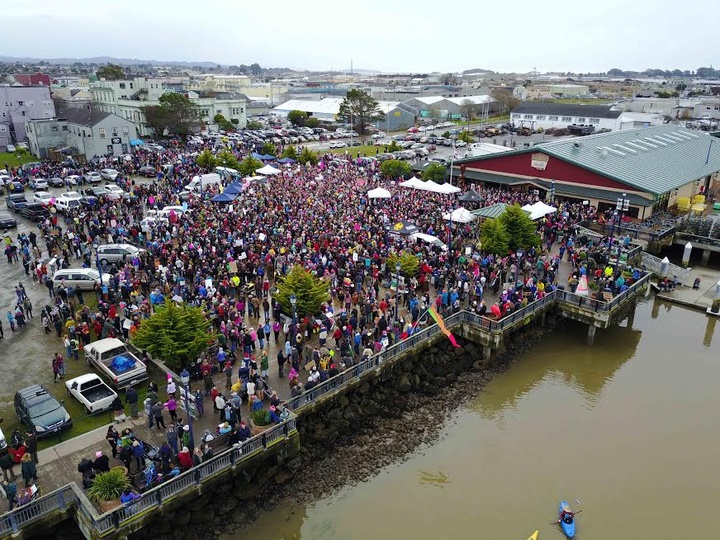 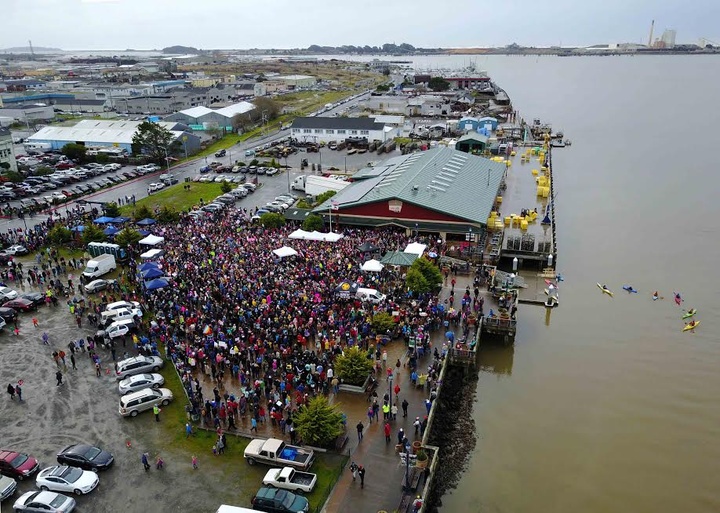 UPDATE: This group of young, singing activists (above) led today’s march the entire way. Allow them to provide you with your favorite song for 2017.

UPDATE: Hey! Look who made the scene: 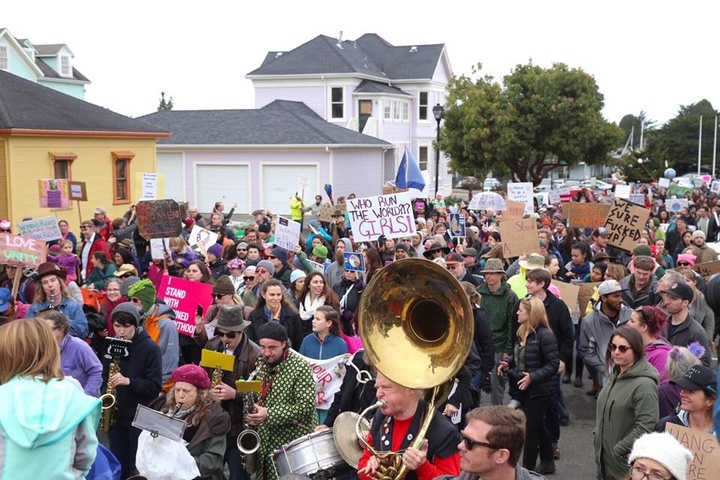 There’s a human traffic jam building up near the Carson Mansion where the marching route intersects, Goff reports.

Moments after the end of the line left the boardwalk, the front of the line is now making its way back to the Market Square. 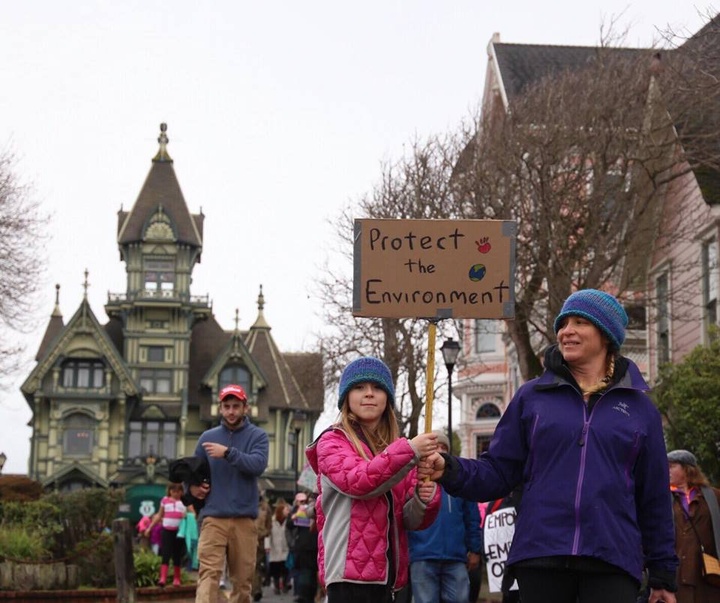 After more than half an hour, the last of the crowd has finally made it off the Eureka Boardwalk.

Officers are attempting to move the crowd over to one side of the roadway as Old Town traffic has been backed up for 20 minutes straight.

“The line is endless coming off the boardwalk,” one officer stated over the scanner.

The march now spans well over a dozen blocks. The crowd began marching almost half an hour ago, and protesters continue to flow from the Market Square starting point. 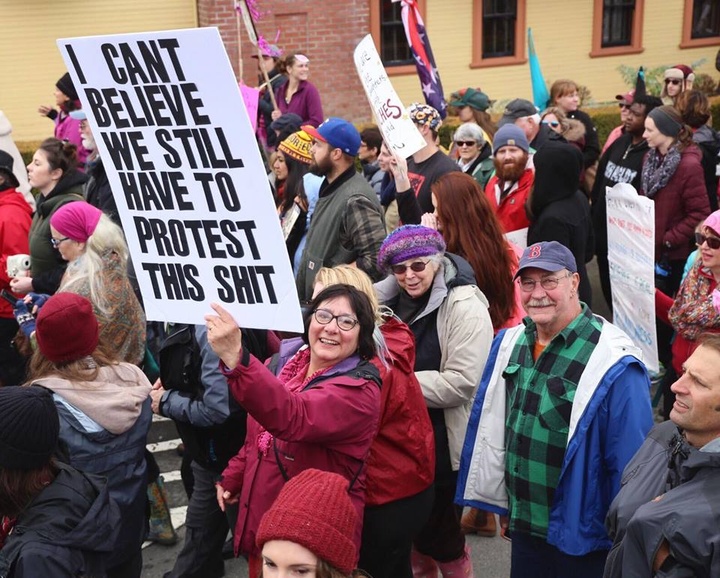 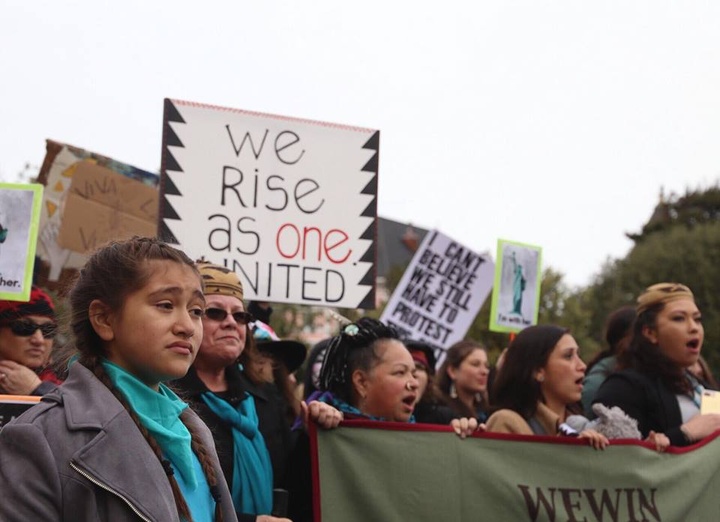 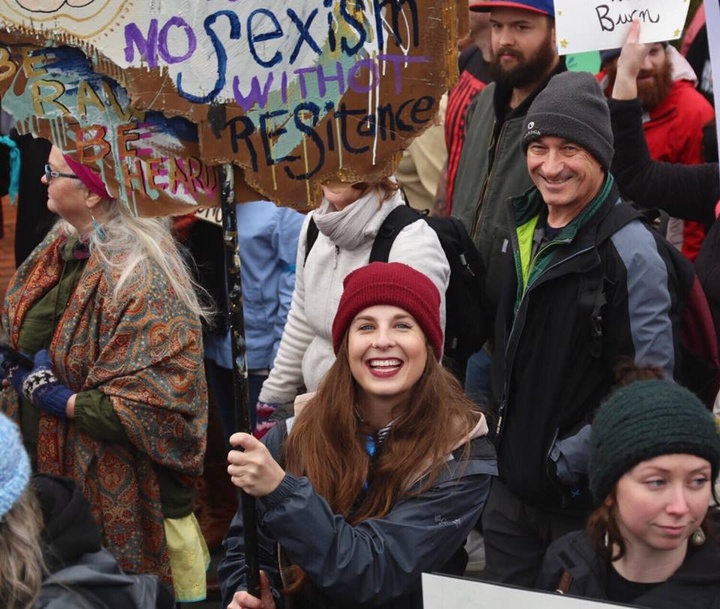 The massive crowd continues to wind through Old Town for blocks on end. 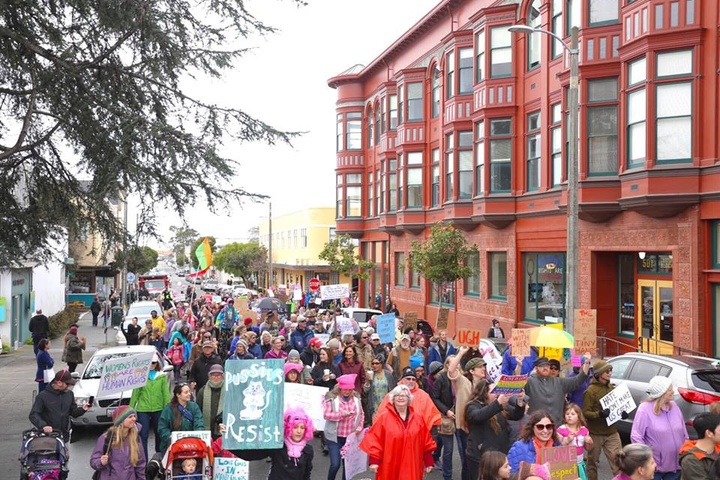 And they’re off. More than 2,000 people are making their way through Old Town Eureka, in what may be the largest protest in recent memory.

“I’ve never seen this many people at event on the C Street Market Square,” Goff said. “The crowd extended well beyond the reach of the PA system.” 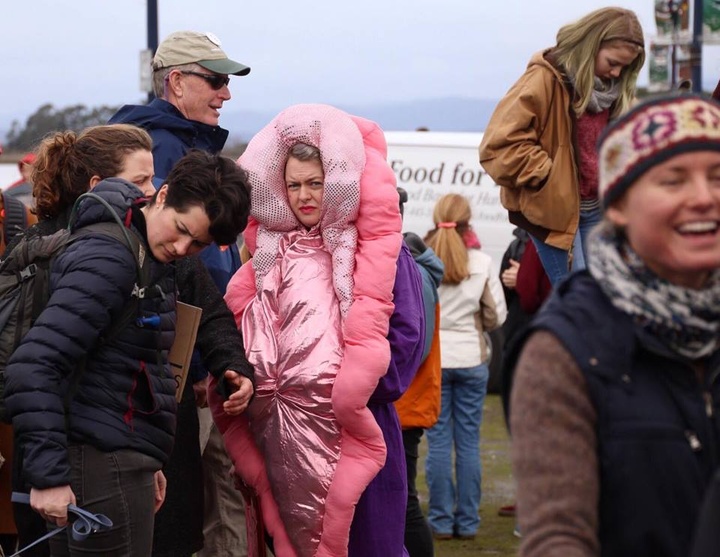 Eureka Police Department Chief Andy Mills Tweets that more than 2,000 peaceful protesters have filled the Market Square. The crowd will start marching in a few minutes. 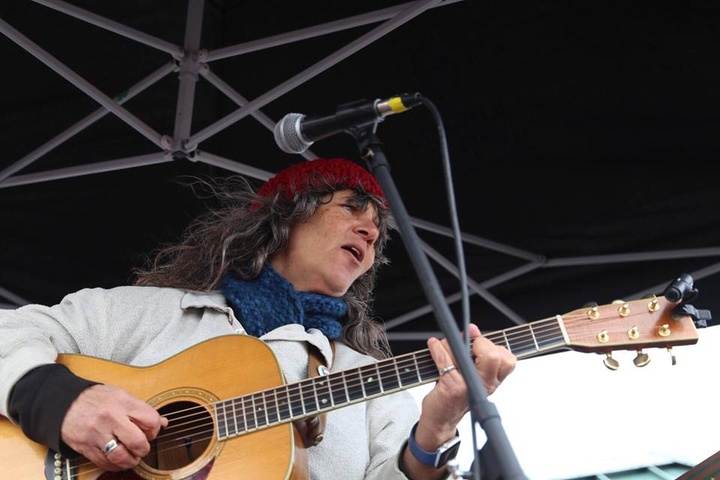 Musicians and speakers entertain the crowd as they prepare for their march at 2:15 p.m. Many protesters are wearing knitted “pussy hats.” A pro-feminist symbol on display at marches all across the world today. 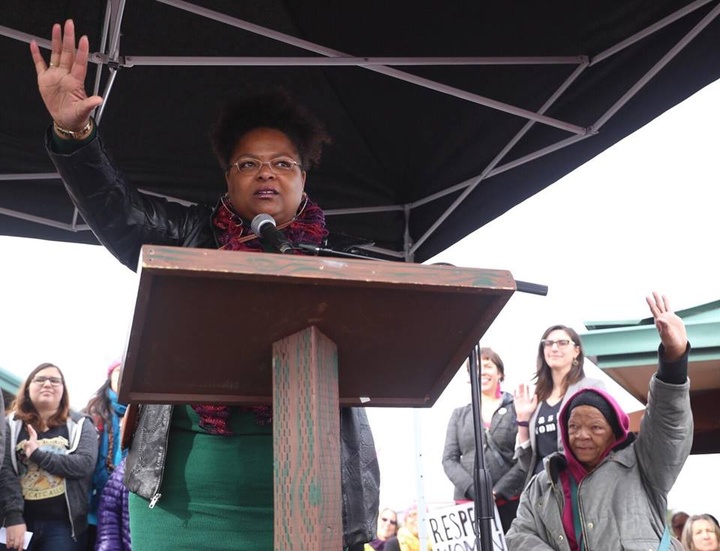 Speaker Dr. Ramona Bell was joined onstage by her elderly mother who grew up in Mississippi. 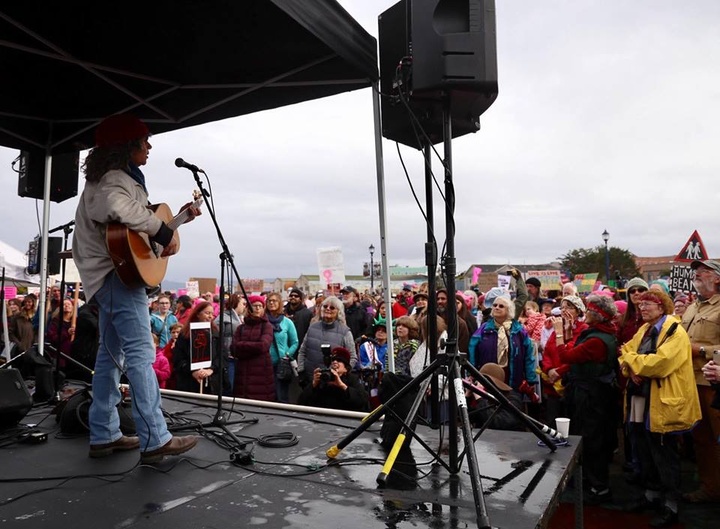 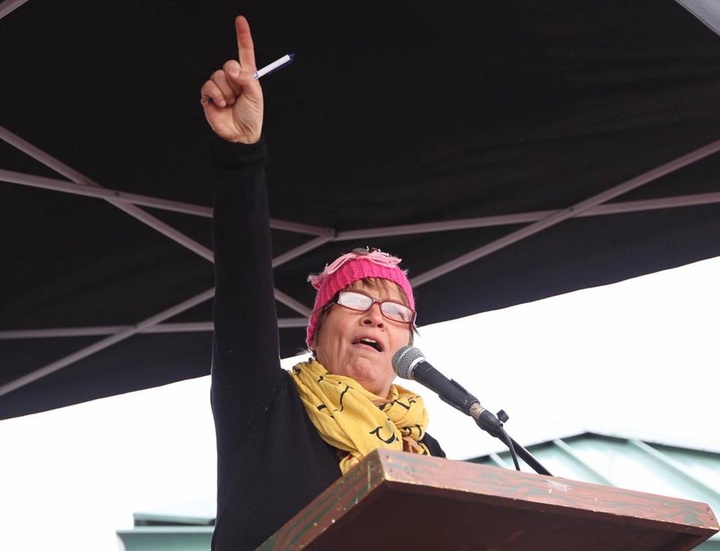 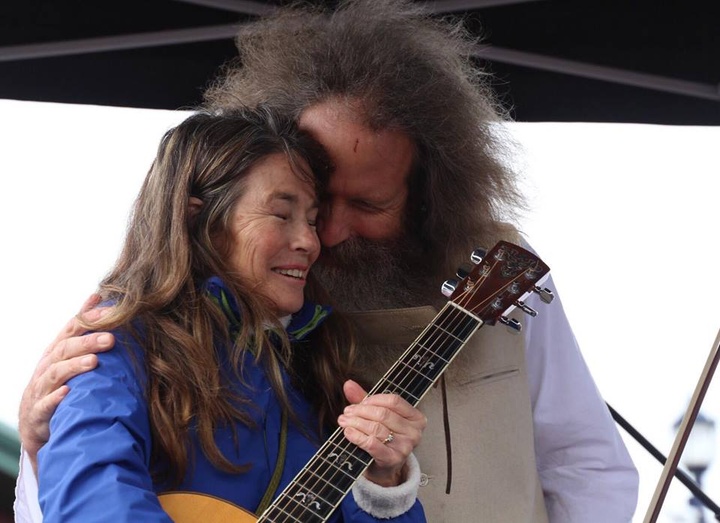 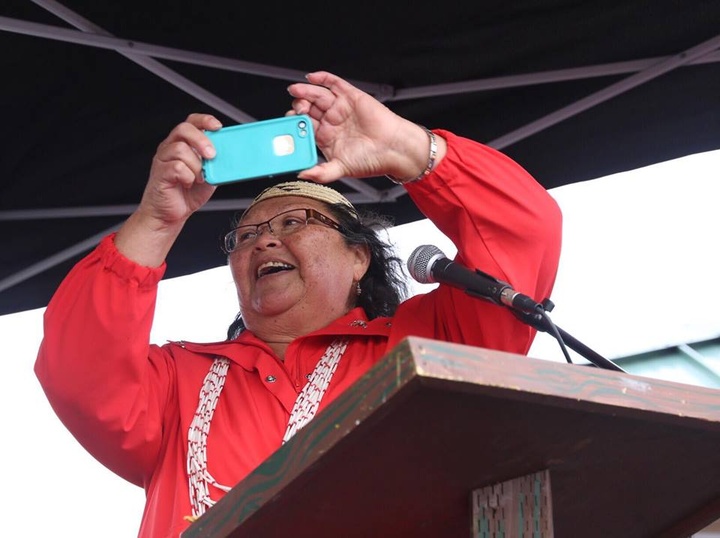 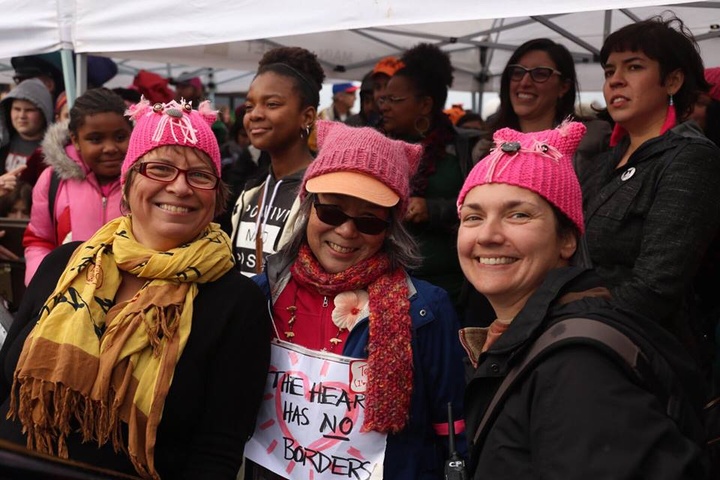 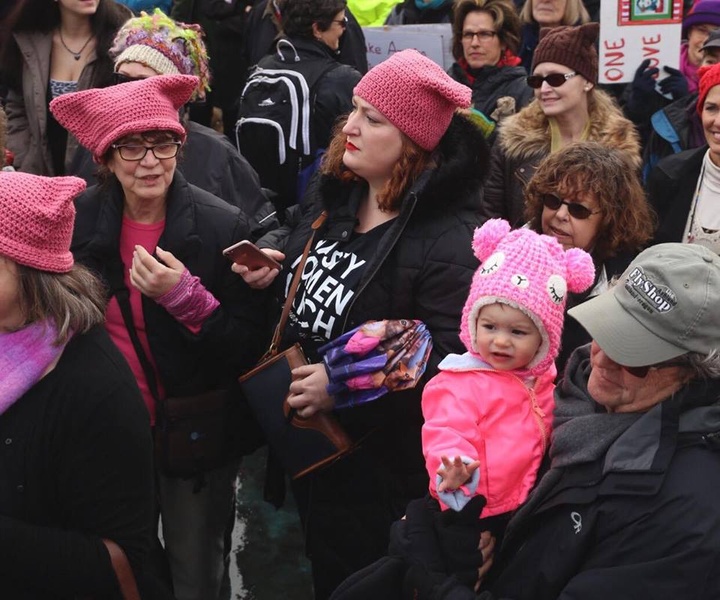 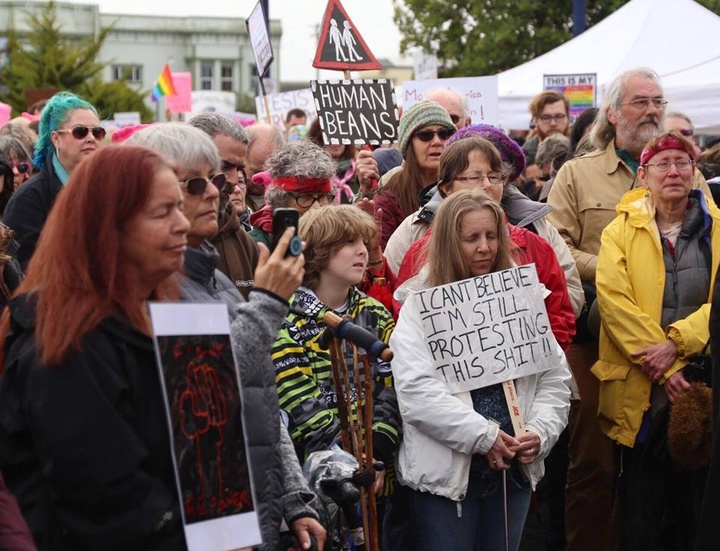 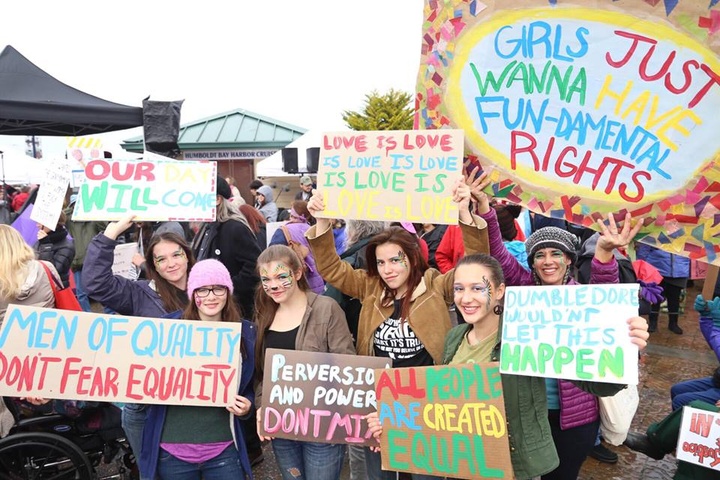 The march has yet to begin, as protesters are still arriving, many hoisting brightly-colored and creative signs. 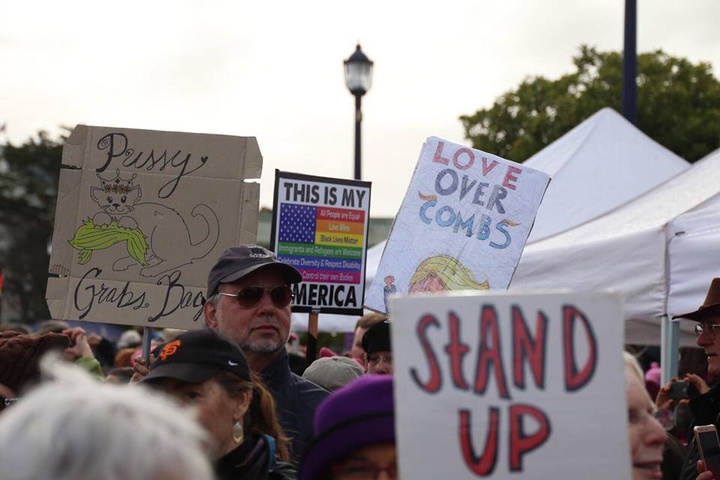 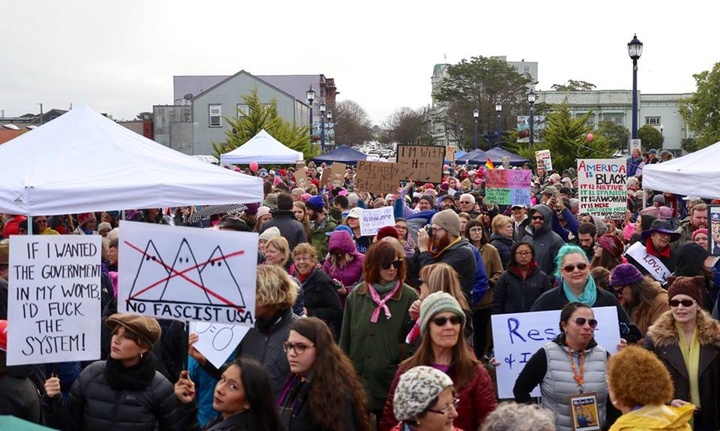 The crowd is spilling out of the dirt parking lot, as what looks like more than 1,000 marchers gather for the event. 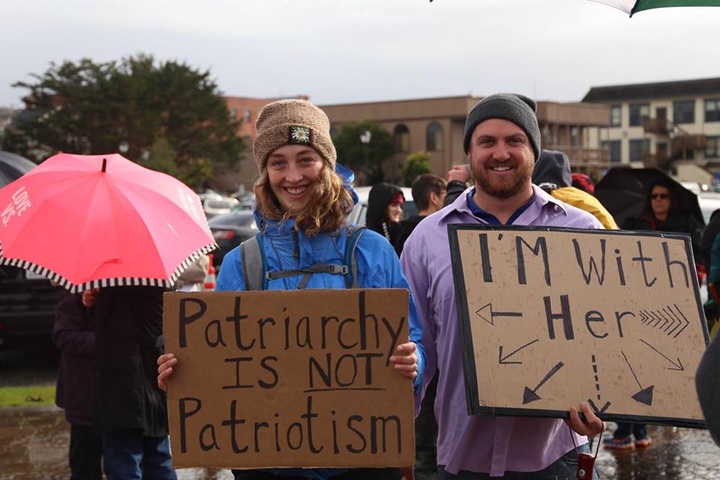 Nearly 1,000 people have gathered in the rain at Eureka’s C Street Market Square as part of a worldwide day of solidarity to protest the discriminatory rhetoric of the Trump Administration.

Local protesters will march in unity with millions across the globe for the Women’s March on Washington, a day of action organized to send a message to the new administration. 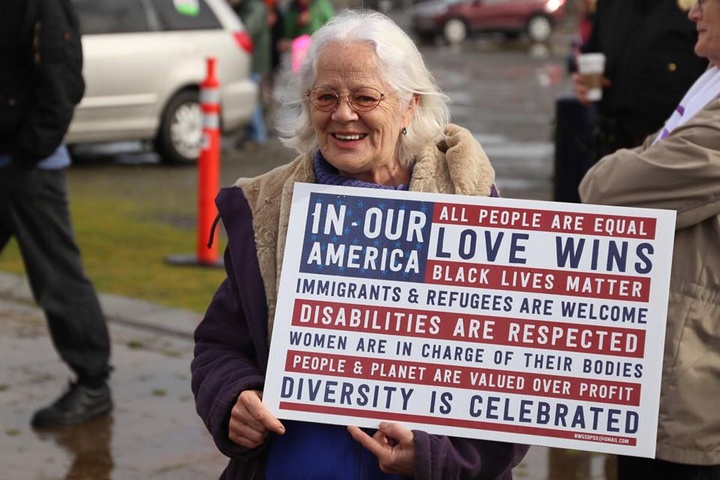 While the event organizers do not classify the march as an anti-Trump rally, the Women’s March on Washington website cites political issues including women’s and civil rights, as well as the planned repealing of the Affordable Care Act as their reason for organizing the march.

“The rhetoric of the past election cycle has insulted, demonized, and threatened many of us - immigrants of all statuses, Muslims and those of diverse religious faiths, people who identify as LGBTQIA, Native people, Black and Brown people, people with disabilities, survivors of sexual assault - and our communities are hurting and scared.

We are confronted with the question of how to move forward in the face of national and international concern and fear,” the website reads.

“In the spirit of democracy and honoring the champions of human rights, dignity, and justice who have come before us, we join in diversity to show our presence in numbers too great to ignore.

The Women’s March on Washington will send a bold message to our new government on their first day in office, and to the world that women’s rights are human rights. We stand together, recognizing that defending the most marginalized among us is defending all of us.”

At 2:15 p.m., protesters will march along the boardwalk from the C Street Market Square, and through Old Town toward the Adorni Center. Marchers will return to the square at 3:30 p.m.

LoCO’s Andrew Goff will be on scene, following the march through Eureka. We’ll continue to update this post with new information. 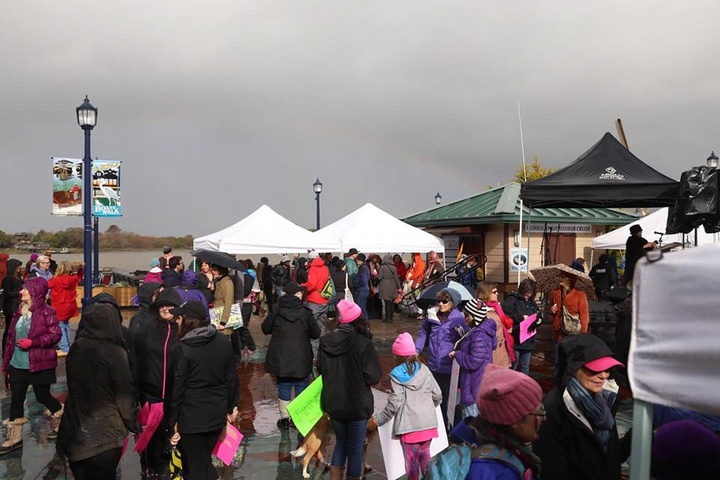 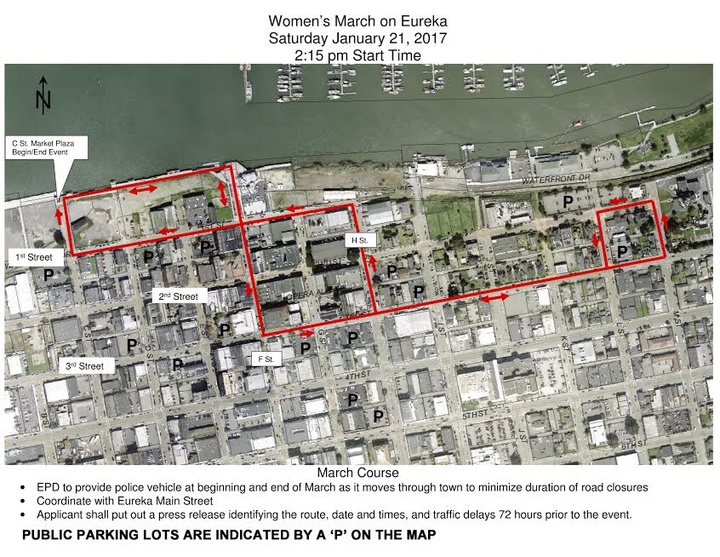