« MATTHEW IN THE MIDDLE: Civility War

That Superfast Undersea Internet? You’re Probably Not Getting It, Unless You are One of 307 People Who Live in Lewiston 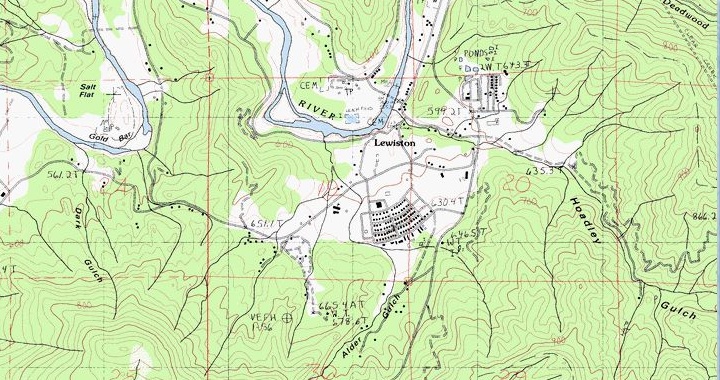 Beautiful downtown Lewiston, on the shores of the Trinity River in Trinity County: Soon to be Northern California’s new digital hotspot.

Humboldt County internet consumers won’t be able to buy blazing fast service from the new fiber optic cables that might soon rise onto the Samoa Peninsula, Kraken-like, from the sea.

Rather, that privilege will be reserved exclusively for 307 residents in the tiny Trinity County town of Lewiston, who — if all goes according to plan — will be able sign up for a smoking 1 gigabit/second download connection and fiber directly to their door, all for the reasonable price of $60 per month.

Not in Lewiston? Unless you are a school, government office, tribal entity, cellphone company or Humboldt State University, you’re probably not getting the hookup.

These and other details of Inyo Networks’ “Digital 299” project can be found on the website of the California Public Utilities Commission. Inyo is seeking $41 million from the commission’s Broadband Infrastructure Grant program to land fiber optic lines at the old Samoa pulp mill and to lay down new fiber from here to Redding, with a few stops along the way (including, most importantly, Lewiston).

Why will Lewiston get this deal, when we won’t? The answer lies in the details of the CPUC’s grant program. The commission offers these grants to companies who propose to bring the internet to places currently “unserved or underserved” by existing broadband companies. Lewiston happened to fit the bill. Even the town’s Wikipedia page bemoans its terrible connectivity.

But why can’t we get the same deal as the Lewistonians, seeing as how the fiber passes right through our backyard anyway? Well, as it stands, existing broadband companies can challenge CPUC grant applications that infringe on their turf. Originally, Inyo Networks had proposed to bring its $60, gigabit-per-second deal to the community of Hayfork, Douglas City and Burnt Ranch, as well. But two existing telecoms — Frontier and Velocity — challenged the grant, saying that they already provide fast enough broadband to those towns, or would provide it soon. According to a CPUC staff report, Inyo cut a deal with those two companies and limited their last-mile fiber plans to the lucky 307 in Lewiston, at which point those other companies withdrew their objections.

Humboldt County and other communities along the “Digital 299” route will still see some benefit from the project, even if consumers don’t get to buy their bandwidth from Inyo Networks directly. The staff report notes that the bulk of the funding requested by Inyo will go to “middle mile” projects, such as additional cell phone towers along Highway 299. Humboldt State University will also get direct access to the fiber, and the company plans to run a spur line up to Hoopa to serve tribal government, area schools and medical facilities. All told, the staff report says, “as many as 117 schools, colleges, research institutions, hospitals, clinics, public safety, tribal lands, and other Community Anchor Institutions” could benefit from the project.

In addition, the line would provide yet more redundancy to existing telecommunications companies that might wish to rent bandwidth, and would provide a direct northern California connection to trans-Pacific trunk lines. As we talked about yesterday, the Harbor District would get $1.75 million one-time payoff for providing a landing spot for the cable, via the outfall pipe at the old pulp mill, which the district now owns. And there’s always the chance that once the infrastructure is in place, regulations regarding competition in the telecom sector might relax.

Nevertheless, the project is not without some controversy. Michael McKaskle, a member of the board of the Redway Community Services District and two-time LoCO contributor, sits on the board of the Redwood Region Economic Development Commission. Last night he commented in the Thunderdome that he voted against sending a letter of support for the project when it came before the RREDC board:

I voted against it because I feel that if the people are going to pay more than 2/3 of the cost we should own at least 2/3 of it, never mind the public gift of right of way.

It is a very valuable item.

The ocean landing is super valuable and the district should get way more for it. There are very few spots left on the Ca coast and the industry is already looking at landings in OR. They want close connections to facilitate high speed trading on asian markets and want the few micro seconds advantage.

Also Google is rumored to be considering a server farm near the Trinity river dam because of the cheap power and that would be a huge user of the line.

Strange as a Trinity County Google facility might seem, the CPUC staff report does lend it some credibility. “Project proponents also see opportunities for developing hosting facilities or data centers in Trinity County, which presently has a low-cost and under-utilized electrical power capacity,” it reads.

The California Public Utilities Commission will approve or deny the grant for the “Digital 299” project at its regular meeting on Feb. 9, in San Francisco. If you wish to comment on the project, you can email your comments to CPUC staffer John Baker: john.baker@cpuc.ca.gov. Access Humboldt’s Sean McLaughlin tells us that comments are due by Jan. 30.