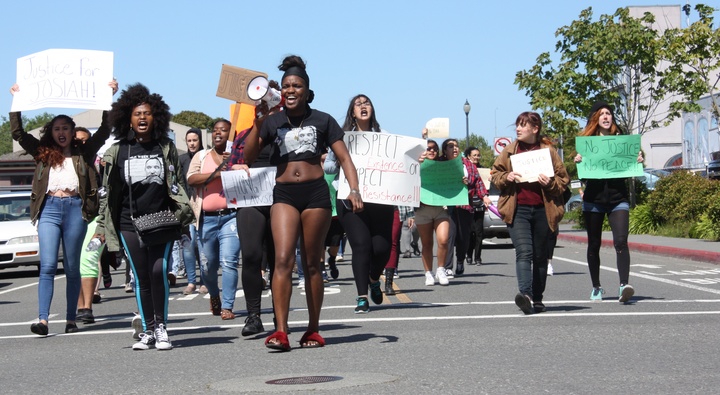 Wind swept through the Arcata Plaza this morning as roughly 100 protesters marched through the farmers’ market demanding justice for the murder of Humboldt State University student Josiah Lawson.

The protest comes a day after Judge Dale Reinholtsen dismissed charges against murder suspect Kyle Zoellner, on the grounds that there was not enough evidence presented during the five-day preliminary hearing to hold him.

Protester Barbara Singleton rallied the crowd at the feet of William McKinley’s statue, which was defiantly painted with freshly chucked egg and stamped with protest signs reading “justice for Josiah.”

“Until we receive justice, there will be no peace,” Singleton cried into a megaphone.

After marching through the plaza at 11 a.m., protesters rallied at the Arcata Police Station, where they were met with no resistance from officers.

“No justice, no peace. No racist Police,” the crowd chanted.

After several moments of deliberating where to march next, protesters headed across the street and began blocking off the driveways leading to the Union Town Shopping Center, where they were met by several angry drivers.

One angry driver parked her vehicle and crossed the street to the police station seeking assistance from officers.

Protesters attempted to hand out Pamphlets to several drivers, which stated that Humboldt is not safe.

“There is a murderer on the loose,” the papers read.

One driver aggressively plowed through the crowd with his work truck, nearly running over several defiant protesters. The crowd responded by throwing water bottles at the truck’s windshield and banging on its side panels.

After roughly a half hour of backing up traffic in the shopping center, APD officers arrived on scene. But by that time, protesters were headed back to the Plaza, where the rally fractured and dwindled down around noon.