« Will the Board of Supervisors Appoint a New Planning Commissioner Tuesday, at Sundberg’s Final Meeting?

Two teams that appear poised to make some serious noise in their respective conferences this season met in the championship game at the Lady Panther Classic at McKinleyville High on Saturday.

And they didn’t disappoint, with the host team securing a hard-fought and exciting 53-42 win over St. Bernard’s, pulling away late after the visitors had rallied from an early 13-point deficit.

The win lifts the Panthers to 7-2 on the season and sets them up nicely for Wednesday’s Big 5 opener at Arcata, in a game that was moved forward from the new year.

The Panthers have lost 17 straight in the Big 5, but after an impressive few weeks of preparation, there’s every reason to believe that will change soon.

For the second straight night, the Mack girls got a huge lift from junior Rayn Tripp, who scored a game-high 18 points, as well as seniors Grace Rosebrook and Theresia Dickey, the latter of whom was named tournament MVP after an impressive three days.

Neither team looked sharp shooting the ball early on, although the Panthers settled the quicker of the two, while causing the Crusaders problems with their high intensity defense.

“I didn’t prepare us very well for their pressure, and that’s on me,” St. Bernard’s head coach Mark Gardner said. “(Mack coach) Tony (McClure’s) team play a good pressure game. We need to be better.”

The two teams meet again at St. Bernard’s on Tuesday.

Several missed free throws didn’t help matters early on for the Crusaders, but after finding themselves 13 points adrift midway through the second quarter, they finally rediscovered their shooting touch.

St. Bernard’s went on an 11-0 run to close out the half, pulling within two points of the Panthers, who had their own problems from the line, going 0-for-7 in the second quarter.

“Our intensity was good for all four quarters,” McClure said. “Even when we struggled offensively in the second quarter, I thought our defense was still able to maintain its energy.”

The Mack bench looks on during the game.

The Panthers came out the more fired up of the two teams after the interval, but the Crusaders re-established the momentum again midway through the quarter, tying the game on a Jasa Sisemore basket.

Sisemore was instrumental once again for the Crusaders, continually causing the Mack defense problems every time she had the ball, and creating numerous second chances for herself.

A big blocked shot at the halftime buzzer also gave her team a boost heading into the locker room.

The tie didn’t last, however, with a Dickey free throw giving the lead right back to the home team just moments later, and it was a lead the Panthers would not relinquish the rest of the way.

Tripp followed Dickey’s free throw with a 3-pointer that gave the Panthers a big lift when they needed it, and they closed out the third quarter on an 8-2 run to hold a six-point advantage heading into the final quarter.

It was more than enough, as the Panthers stepped up late in a tight game, something their head coach has been looking for from this group. 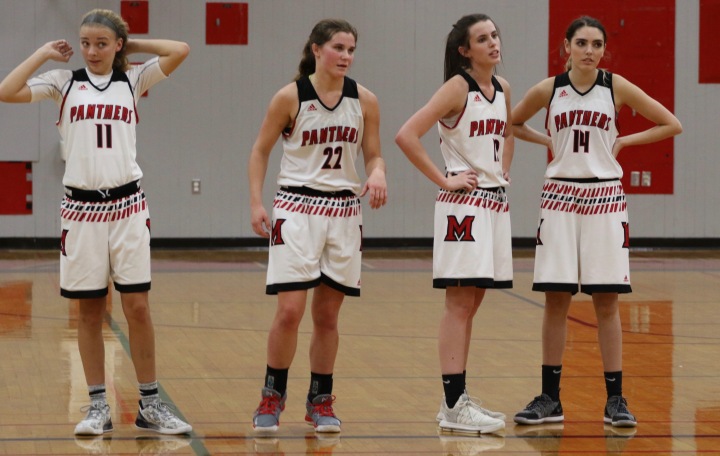 Dickey again was clutch at the free throw line down the stretch, as she was against Hoopa in Thursday’s tournament opener.

Dickey, Rosebrook and Tripp all came up big for the Panthers in the fourth quarter, coming away with a number of steals and never allowing the St. Bernard’s players get comfortable.

Rosebrook and Tripp were each named to the all-tournament team.

Dickey finished with 12 points, while Hailee Henry capped a good tournament with eight points, including a big basket off a Rosebrook steal to stretch the lead to eight at the start the fourth quarter.

Emily Gardner led the Crusaders in scoring and was a constant threat in the paint throughout, finishing with 16 points, while Sisemore added 14 points.

The Crusaders dropped to 5-4 with the loss, but overall the head coach was happy with his team’s tournament showing, which saw them win twice to reach the championship game, including impressive victories over a previously unbeaten Redding Christian team and Fortuna.

“They gave us good floor leadership, and they stepped up their game,” Mark Gardner said.