“Hands and feet have to work independently of each other, correct?”

Check out this unique drill for the O-Line at @seniorbowl practice. pic.twitter.com/66qP2M4KzB

Cappa put on a show in front of Houston Texans O-Line coach Mike Devlin during a unique drill at the Reese’s Senior Bowl practice today.

The drill, which was broadcast live on the NFL network, originally called for players to juggle two tennis balls at a time while shuffling their feet. But if Humboldt contributes anything to the world of sport, it’s top-talent jugglers.

“Just two?” Cappa can be heard asking in the video.

“Just two, unless you know how to juggle,” Devlin responded. “You do?”

“Oh, yeah,” Cappa fired back as Devlin tossed him another ball.

While other Division I talent like Idaho State guard Skyler Phillips and Auburn Center Austin Golson struggled to complete the drill with two balls, Cappa shuffled his feet like a juggling mad man, handily completing the drill with all three balls.

There’s no word if the juggling has upped his draft value, but NFL Draft Analyst Jonah Tuls Tweeted today that Cappa is now considered a solid Day 2 NFL Draft prospect.

Two of the nastiest, active finishers in Mobile this week. Their tape matches what they did here. Big winners and both are now squarely in Day 2 consideration.

Catch Cappa Saturday during the Reese’s Senior Bowl game live on the NFL Network at 11:30 a.m. 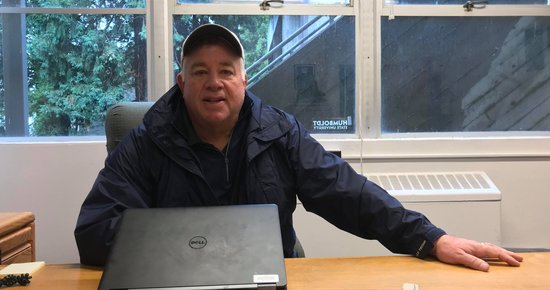