« Having Trouble Contacting a Loved One From the Redding Area? Follow These Missing Person Procedures

The Mendocino Complex Fires, two wildfires burning along the southeastern edge of Mendocino County, are a combined 9,500 acres in size and 2 Percent Contained since igniting yesterday.

The River Fire, the larger of the two fires, is burning 6 miles North of Hopland near Old River Road and is 6,000 acres is size.

Calfire reports that one residence has been destroyed by the blaze, and another 300  are still threatened. 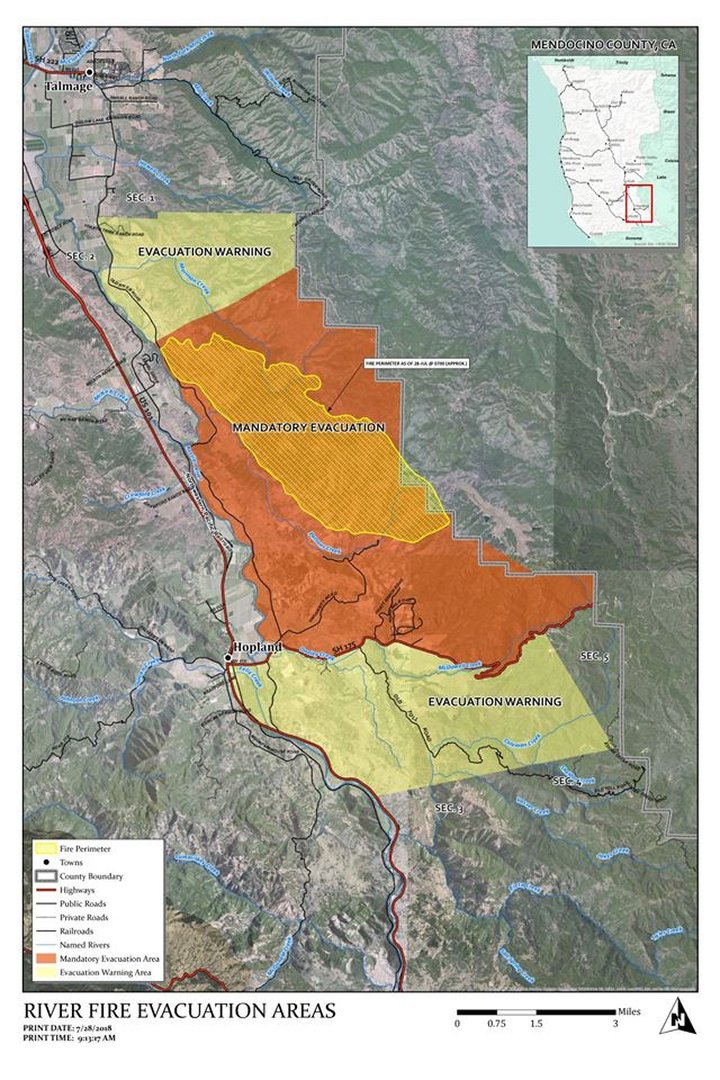 #RanchFire [update] off Highway 20 near Potter Valley, northeast of Ukiah (Mendocino County) is now 3,500 acres and 2% contained. #RanchFire is now part of the #MendocinoComplex https://t.co/uhlH8hb9e4 pic.twitter.com/e700DWjnMs

The Ranch Fire is 3,500 acres in size and is burning along Highway 20, 8 miles northeast of Ukiah.

One outbuilding has been destroyed by the Ranch Fire, while 86 other structures are still threatened.

Mandatory evacuations have been ordered for the 8000 block of River Road, South to the intersection of Highway 175 from the Russian River east to the Ridge above Highway 175, within the North South points.

“These evacuations also include all driveways and homes located between the North South points,” Calfire stated.

Evacuation advisories are in effect for the areas of Blue Lakes, Bachelor Valley, Witter Springs, North Scotts Valley Road from the 7000 block to Highway 20, and Highway 20 from the 6000 block to the Lake County line and into the Blue Lakes area.

An evacuation center has been set up in the Mendocino College Dance Room, located at 1000 Hensley Creek Road in Ukiah.

The Redwood Riders Arena, located at 8300 East Road in Redwood Valley, is serving as an animal evacuation center for small horses. Other small animals are also being accepted at the Animal Care facility, located at 298 Plant Road in Ukiah.

Old River and University Roads are closed in the area.

Calfire reports that 470 firefighters, 40 engines, 20 water tenders, two helicopters, 16 hand crews and 15 dozers have been dispatched to the fires.