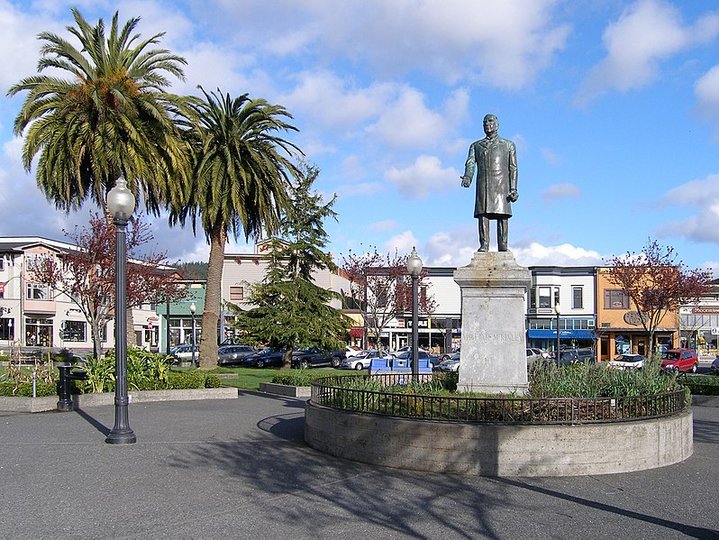 While Arcata prepares to find a new home for the bronze centerpiece that’s polarized its community, LoCO decided to head to the library and dig up a few fun facts — and photos — about the old William McKinley statue.

Three months before the McKinley statue was placed on its plaza pedestal, where it still stands for a little while longer, Northern California was hit with a deadly 7.9 magnitude earthquake. As buildings crumbled and burned throughout San Francisco, a freshly forged McKinley sat inside a burning iron works factory. Unable to save the statue himself, artist Haig Patigian fled the scene.

“I was unable to rouse myself sufficiently to secure men who would remove the finished statue,”  Patigian said during the statue’s unveiling in Arcata (as later relayed by the Times-Standard.) “I saw it there. And I saw the devouring flames moving on toward the place where McKinley stood. I went away without doing anything. After the fire I sought the ruins of the foundry. In the place where I had left the statue I found a pile of hot bricks. Below these was a mass of red-hot debris. What a vision I had of my precious statue … now molten metal beneath the bricks.”

For a while, Humboldt County residents thought the bronze statue was destroyed in the fire as documented by an Arcata Union article during that time: “While no word has been heard from sculptor Patigian regarding the fate of the bronze statue of William McKinley, there is not the slightest doubt but it is a shapeless mass of metal at the time, as the fire passed over the district where the iron works stood where it was cast.”

But 12 days after the great quake, George Zehndner, the man who ordered the statue, received a telegram from Patigian stating the statue was saved. Zehndner is said to have “wept for joy” upon reading the news.

“A passing employee of the works saw that the statue would be ruined and called to other workmen who were saving their own belongings: ‘Come on, boys, let’s save the statue of Bill McKinley,” he cried and under his inspiration the workmen bore a ready hand,” the Examiner wrote. “They dragged the heroic figure to the center of the street, and there it remained unharmed, resting on its back with an outstretched hand pointing to the sky. Many who passed  during the week and saw the statue in the street shook the hand and said “Good boy, McKinley!’”

Returning to the scene, Patigian reportedly noticed a crowd gathered in the street nearby. He hurried over to find his artwork lying in the street, the vehicle used to haul it to safety a charred ruin.

The identity of the statue’s rescuers remains a mystery to this day.

A lazy Photoshop recreation of what the statue looked like lying in the streets of San Francisco. Photo from Wikimedia.

2. A Gazebo, Among Other Things, Once Stood In Its Place

Old photos of the Arcata Plaza at the turn of the 19th Century | HSU Library Special Collections.

Photos dating back to the late 1800s show that a big, beautiful gazebo once stood in the center of the Plaza. The Times-Standard reported in 1971 that the gazebo was demolished two months before the statue was unveiled on the Fourth of July, 1906. After the gazebo was removed, 25 tons of granite were placed at the site to serve as the base of the statue.

Earlier photos show a time when the Plaza was fenced off and served as a watering hole for cattle. An old, unattributed Humboldt County newspaper clipping in the Humboldt State University Library recounts the memory of a long-lost Arcata resident.

“Annie McKinnon, a resident of Arcata since 1873, remembers the plaza when it was only a bare lot used for baseball games by the children,” the news clipping reads. “Later the plaza was used as a watering place for cattle and horses. A well centered the square, and a fence surrounded it with a turnstile entrance on each side.”

3. The Men Responsible for Arcata’s McKinley Statue Were Both Immigrants

Zehndner, the proud Republican who ordered the $15,000 statue and gifted it to the City of Arcata after McKinley was assassinated in 1901, was born in Germany. The Humboldt Standard referred to Zehndner as a “millionaire” in 1906, but according to the book “History of Humboldt County, California,” Zehndner was born to humble beginnings in Bavaria, Germany in 1824. According to the book, Zehndner was given the opportunity to sail to America in 1849. Once in America, he bounced around from Indiana, to Ohio, to Cincinnati, to New Orleans, before he eventually sailed to San Francisco in 1852.  Zehndner reportedly found success investing in a pack of mules in Weaverville. In 1854 he traded his mules for 20 cows and drove the herd across Humboldt County, where he eventually settled and became a successful rancher.

The Arcata Union previously reported that the statue’s sculptor, Haig Patigian, was born in Armenia in 1876 and followed his father to Fresno in 1891. The Patigian family was reportedly friendly with then-Arcata High teachers Lillian and Rose Hagopian.

News clippings of old plans to move the statue and place a gazebo in the center of the plaza.

4. Moving the Statue Has Been an Issue for Decades

Citizens have been trying to remove the McKinley statue from the Plaza center for 60 years.

Dating back to 1958, different citizen groups have proposed moving the statue elsewhere in favor of replacing it with a bandstand like the one that stood there at the turn of the last century. The idea was unsuccessfully proposed in 1958, and again in 1979.

The proposed Plaza bandstand in 1999.

By 1999, community organizers felt defeated by the outcry from Arcata’s staunch statue supporters, and proposed putting a bandstand on the south end of the plaza. This also never happened. A Humboldt Beacon article from 1999 quotes then Arcata Mainstreet member Mary Gearhart saying that previous discussions about moving the statue caused such an “uproar”  that organizers gave up on any Plaza restoration plans that involved moving the statue.

5. The Statue was Regularly Dressed up and Mocked for Different Plaza Festivities

While the statue is now plantered-off and revered by some as a sacred artifact, Arcata citizens used to treat McKinley like a Barbie, dressing him up for the holidays. Old newspaper photos show McKinley dressed as a choir boy and Santa Claus over the years. He was also occasionally used as a base to hold up Christmas decorations. An Arcata Union article from 1980 states that “practical jokers” would insist on “dressing [McKinley] up for every and any occasion.”

6. The Ship That Delivered the Statue to Humboldt Sank Two Years Later

The Pomona docked in Eureka, California in 1905. | Photos provided by the California Department of Parks and Recreation.

The SS Pomona, the steamboat that delivered the McKinley statue to Humboldt County in 1906, sank off the coast of Fort Ross two years later. The California Department of Parks and Recreation reports that the ship sank on March 17, 1908 when it hit a rock in Fort Ross Cove. Skin divers were recorded exploring the wreck in 1971, looting the ship of its portholes, brass keys, tea cups and anchors.

The passenger and freight carrying steamer was 225 feet long and 33.5 wide.
The Pomona’s final resting place.

7. A Number of Sculptor Haig Patigian’s Public Pieces Are Featured Around San Francisco

Patigian was a respected artist in his day, and at the time of his death was referred to by the San Francisco Chronicle as “one of the giants of San Francisco’s golden age.” Many of his works are still on display in San Francisco, including the statue of Abraham Lincoln outside San Francisco City Hall, the volunteer firefighter memorial in Washington Square and the statue of General John Pershing in Golden Gate Park. His statue of Thomas Starr King, an influential California minister who spoke out against slavery during the Civil War, was once on display in the U.S. Capitol Building, but has since been moved to a grove outside the state Capitol in Sacramento.

Patigian’s sculpture of Abraham Lincoln. Photos of his San Francisco sculptures from Wikimedia.