Just One Local Brewery Will Be on Tap at Oyster Fest This Year, After Negotiations Sour Between Arcata Main Street and Group of Local Brewers 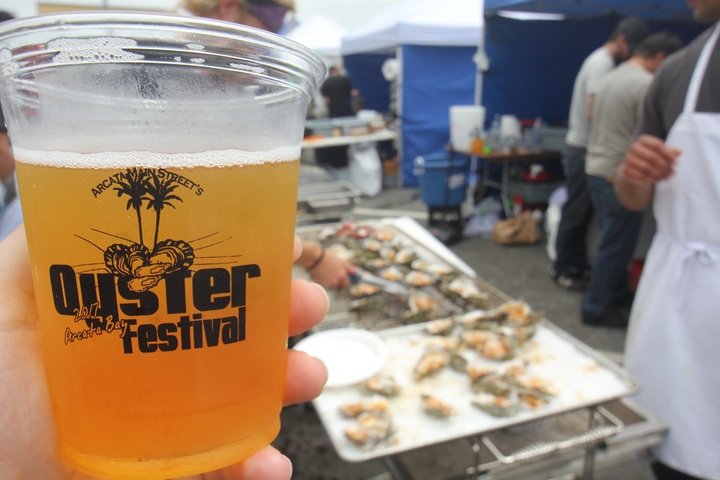 There will be no Steelhead Extra Pale Ale to suck down at this year’s Oyster Fest. No gulps of Great White, no raging on Raspberry Lambic, no imbibers of MacIntosh Cider and no Eel River IPA to s-i-p.

Despite Humboldt’s array of local breweries, just one will be on tap at Oyster Fest this year. In fact, there will be a whole lot fewer beer options in general, partly by Arcata Main Street’s design and partly due to an ongoing feud that boiled over between the community nonprofit and a group of local brewers.

It all started back in mid-March, when Arcata Main Street Executive Director Jeanette Todd was making the rounds recruiting sponsors for the annual event, which basically supplements all of Arcata Main Street’s annual budget.

Due to declining revenue in recent years, the Arcata Main Street board of directors had been tinkering with the event formula in hopes of shortening lines and increasing sales. But when the board approached its usual brewery sponsors with the new goal of receiving 100 percent beer and cider donations for this year’s festival, it set off a chain reaction of hurt feelings and sour dealings.

“That’s pretty typical for a nonprofit to say we want the moon and stars and then negotiate,” Todd told the Outpost last week. “We reached out to [local breweries] first, and somewhere down the line there was a lot of assumptions and shenanigans, and it was too much drama for our event.”

But according to three local brewery owners, the Main Street board did more than just ask for 100 percent donations. They demanded it, on the grounds that they received the same offer from Lagunitas, the large brewing company owned by Heineken International — a $23 billion corporation.

“In a nutshell, they were using Lagunitas as leverage to provide 100 percent donations to the festival and we felt it was unfair, a little devaluing to our products, and too pricey for our company and our distributors,” Six Rivers Brewer owner Meredith Maier told the Outpost.

However, this is a claim that Todd vehemently denies.

“There was no offer from [Lagunitas]; we never alluded to anything ever,” Todd said. “[Lagunitas] said they might be willing to support us, but they didn’t come to us. We came to [the local brewers], and those people had already made a bunch of assumptions. It was pandemonium.”

The swirling rumors of a 100-percent Heineken-sponsored Oyster Fest stirred up initial drama between the board and local brewers. But it was a meeting on an early spring afternoon out on the Mad River Brewery patio that caused negotiations between the local brewers and the Main Street board to collapse, when the board showed up thinking it would be negotiating with one brewer and was instead met with a surprise intervention.

“Jannette said Mad River was going to donate 36 kegs,” Maier said. “This is a tight knit community, so we knew ahead of time that this wasn’t the case. We thought it was best to all show up to the meeting and put it all out on the table. That’s why we all showed up, to make an offer to her. But Jeanette continued to, for lack of a better word, lie, and tried to leverage us against each other.”

Todd, meanwhile, said the meeting made board members feel “ambushed.” And from there, both sides stopped talking to each other: Todd saying that the local brewers teamed up and iced her out, the brewers saying that the board responded by quickly moving on with other non-local options.

“We showed up for that meeting and we were out of our element,” Todd said. “We were totally taken aback. I didn’t really know what was going on. I think there were a lot of people present there who shouldn’t have been and didn’t really understand what we were trying to accomplish.”

Despite Todd’s dismissal of claims that the board was leveraging an offer from Lagunitas to hustle local brewers into donating more than what they felt was their fair share, multiple brewers present at that meeting told the Outpost that that is exactly what happened.

“It was kind of a weird situation, they basically came to us and said either you guys donate 100 percent or we’ll go with a large multinational company,” Eel River Brewing Company owner Ted Vivatson told the Outpost. “They said there’s another large brewery that will give us 100 percent — the assumption was that is was Lagunitas — and they said ‘if you can’t do it all for free, then we don’t want you there.’”

“It threw us all off guard because the scale of donations they were asking for was just a lot — undoable, basically,” Cartledge said. “I went to a board meeting and spoke with [Arcata Main Street] again and said ‘we love the event, we just wanted to keep it local.’ That wasn’t something that they chose to do this year.”

Cartledge said she also contacted someone she knows at Lagunitas to get an idea of what was really going on behind the scenes.

Like most conflicting stories, the truth probably lies somewhere in the middle. But what’s for certain, is that Redwood Curtain Brewing Company will be the only local brewer on tap at the 2018 Oyster Fest. And while there will be no billion dollar beer companies at the event, the only other brewers set to sell suds are SeaQuake Brewing from Crescent City and 2 Towns Ciderhouse out of Corvallis, Oregon.

For now, the relations between Arcata Main Street and the local brewing community remain strained. But there is hope for future festivals, as Todd and all of the brewery owners interviewed in this article said they hope to work together again the in future.

“This will absolutely affect our relationship in future years, nobody is going to come out of this looking good, it’s a bad situation for everybody,” Vivatson said. “When times gets challenging we should stand together. The consumers is going to say ‘why aren’t all my favorite local beers here, what’s going on?’ When it comes down to it, we don’t want to be bullied. We’ve been open to resolving issues in the past, but in the end, [Arcata Main Street] made a very short-sighted business decision.”