Small but Talented Crusaders Appear Ready for the Big 4 Challenge

Photos by Ray Hamill/HumboldtSports.com – Will Omey returns at QB for the Crusaders this season.

The good news for the smallest school and roster in the Big 4 is that the Crusaders possess some of the very best talent in the entire North Coast Section and have every reason to believe they can compete with their league rivals, who may each have taken a step back this season.

“Practice has been going great,” head coach Matt Tomlin said. “It’s kind of weird year where we have some very talented players, some of the best around, we just don’t have depth behind them.”

Tomlin has a squad of 25, but 12 of them are freshmen and sophomores and should be playing JV, leaving the Crusaders with a limited number of legitimate varsity players.

And that will make it tough later in the season in the Big 4, when they play Eureka, Fortuna and Del Norte, each of which features substantially larger rosters.

It remains the one biggest criticism of the re-arranged H-DNL, which saw the Crusaders move up to the Big 4 last season after years of total domination in the Little 4.

It also means the Crusaders will not have a JV squad for the second straight year, which doesn’t help with the development of young talent.

“These kids learn a lot in practice with the varsity, but they’re definitely going to miss out on some game reps,” said Tomlin.

Jacob Smallwood (21) and Cole Petrusha (54) will start on the offensive line for St. Bernard’s.

Key to their success this fall will be the play of Will Omey and Lane Thrap in particular, both of whom are legitimate league MVP candidates.

Omey was sensational at quarterback and DB a year ago and appears even stronger heading into this season.

The senior, who wasn’t even projected to the team’s starter under center last summer, went on to lead the NCS in total offensive yards.

“Will Omey has looked outstanding on offense and defense,” the head coach said. “He’s going to be a key for our team on both sides of the ball.”

Tomlin also expects great things out of Thrap, a senior receiver/free safety who is arguably the most talented all-around athlete on the North Coast this year.

“Lane Thrap has a chance to be MVP of the league,” the head coach said. “He’s that special. He’s just a competitor.”

Injuries are already starting to take a toll on the small roster, with senior Justin Hagler limited in training camp with a persistent hamstring injury.

Hagler will not play on offense early in the season, but will still see time at inside linebacker, where he is one of the Crusaders’ most important defensive players.

Along the line, Harmon Daniel is expected to pick up where he left off a year ago, finishing last season as one of the most improved lineman in the league.

Daniel will play right guard, alongside Colton Smallwood at right tackle and Cole Petrusha at center.

The line will be talented but undersized, and all five players will also play on defense.

Senior Talimaivao Fonoti returns to the offensive backfield and the bruising running back will be a handful for opposing defenses.

“We think he’s going to be outstanding for us,” Tomlin said.

Another senior, Logan Petrusha, will play receiver and will be relied on heavily, while versatile sophomore Peyton Smith appears ready to have an impact on varsity at slot receiver, running back and nickel back.

More importantly, the team appears to coming together as a whole.

“There’s pretty good team chemistry,” the head coach said. “The older kids are really helping the younger kids. I really like the way this team is coming together.”

The Crusaders, who were 7-5 a year ago and made it to the second round of the NCS playoffs, open the season at El Molino next week. 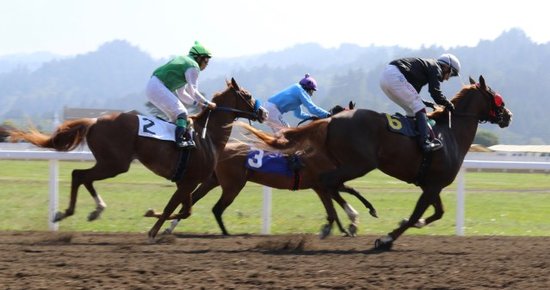 Best Bets for Day Two of the Horse Races in Ferndale