« Eureka Police Surrounded a Problem Property and Knocked on the Door. The People Inside Ran. Then They Got Caught.

WELCOME, BRAINARD! City of Eureka Completes Annexation of Old Lumber Mill Behind the Eucalyptus on the North End of Town » 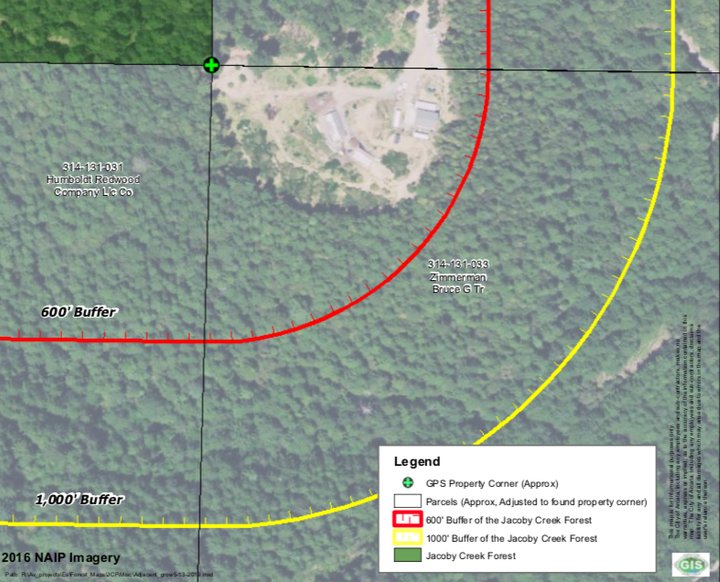 Photo of the Zimmerman’s property and the surrounding community forest. | City of Arcata

UPDATE/CLARIFICATION, AUG. 2: Property owner Bruce Zimmerman writes the Outpost to take issue with a few items in the article below.

For one: Though the city of Arcata characterizes the growing operation at the property as “illegal” — at least before 2016 — Zimmerman maintains that it was legal, and as evidence for this cites the fact that charges against his son following the raid on the 2012 raid on the property were dropped.

Also at issue: Zimmerman maintains that the grow op he is seeking permits for is actually 60 to 108 feet from the city’s property, depending on how you measure it — not 30 feet, as city staff believes and has reported to the council.

The City of Arcata, Humboldt State University and private landowners are suffering a regulatory headache over a piece of land bordering the eastern edge of the Jacoby Creek Community Forest, where a previously illegal cannabis operation [See update above. —Ed.] is being reviewed for commercial permits.

Under Humboldt County regulations, commercial cannabis grows must be 600 feet away from any school, school bus stop, place of worship, tribal cultural resource or public park — like the Jacoby Creek Community Forest. However, these restrictions can be loosened by the county on a case-by-case basis.

The 40-acre property in question, which is actively being used to grow marijuana roughly 30 feet away from the community forest, is one of these unique cases [Again: see update above — Ed.]. As of now, the cannabis site is being put through the registration process and has already received its interim permits from the county.

Arcata Environmental Services Director Mark Andre told the Outpost that the county failed to notify the city about this proposed commercial cannabis operation, adding that the matter was only rushed in front of the city council last week because a citizen tipped the city off to the situation in April.

“Unfortunately, the city staff became aware of it late in the process,” Andre said during last week’s city council meeting. “The county had been bringing [the cannabis company] along in the process before the city discovered it because it hadn’t been referred to us.”

Cliff Johnson, the senior planner of the Humboldt County Planning and Building Department, gave a different opinion, saying that the county did ask the City of Arcata for its input in March.

“If the county said Arcata got a referral in March, that is not material in terms of advance notification for this,” Andre told the Outpost, suggesting that wasn’t enough lead time.

In May, the Arcata Forestry Management Committee, county planners, HSU forestry staffers and the landowner/permit applicant Bruce Zimmerman of Emerald Coast Genetics met twice to discuss how to resolve the problem, which has proven to be messy, complicated and irritating for everyone involved.

Zimmerman originally purchased the land in 2008 to retire on with his wife before she died unexpectedly, he told the city council last week. After purchasing the land, he used a one-time-only, state-approved exemption to clear less than three acres of trees from an area of the property that borders the Jacoby Creek Community Forest, where he built a residence.

After his wife’s death, Zimmerman focused on using the property, which is zoned for timber production, to grow marijuana with the help of his son Brian Zimmerman. Humboldt County code states that pre-existing illegal marijuana grows like Bruce Zimmerman’s can come into compliance in timber production zones. However, because Zimmerman used his one-time exemption to convert an area of his property that’s next to the Jacoby Creek forest, he’s left himself with little to no room to legally cultivate his weed due to the 600-foot setback regulations.

An aerial map of the properties involved. | City of Arcata

In May, a split Arcata Forestry Management Committee voted to recommend the county allow Zimmerman to grow marijuana 150 feet from the Community Forest and place a no-build easement on his property.

An equally split Arcata City Council voted to support the Forestry Management Committee’s suggestion last week via a comment letter sent to the county planning department, but the city still has major concerns about the grow’s proximity to the forest.

The reason? A number of nefarious activities that have occurred on the property since it was purchased by the Zimmermans in 2008.

In 2012, the Humboldt County Drug Task Force raided the property, where Brian Zimmerman barricaded himself inside the newly built home and refused to let officers in, according to a press release.

Brian Zimmerman after his arrest in 2012.

After bashing down the front door, the DTF seized 1,532 marijuana plants that were found growing inside the residence, inside greenhouses and outdoors. Officers also seized a rifle, a pistol and $3,457 in cash.

Brian Zimmerman was arrested for resisting arrest, being armed in commission of a felony, cultivation and possession of marijuana for sale.

Another man, Jeremiah Cody Funk, was also arrested during the raid. Funk was charged with growing 199 outdoor marijuana plants on the property, being armed in commission of a felony, being a convicted felon in possession of a firearm, cultivation and possession of marijuana for sale and violation of probation.

During the raid, the DTF also alerted the California Department of Fish and Wildlife to a possible water diversion occurring on the property. The Outpost reached out to the CDFW to confirm if any water diversion had actually occurred, but has not received any information at this time.

The Humboldt County Building and Planning Department was also called to the scene that day, and ordered power to be cut to the property after its electrical wiring was deemed to be a fire hazard.

In addition to all this, CalFire inspected the property last month and determined that the Zimmermans illegally cleared a number of trees from the land surrounding their property in 2009. This violation included a number of trees being cut down on an adjacent property owned by Humboldt Redwood Company, and two trees that belong to the City of Arcata.

A tree owned by the City of Arcata that Calfire believes was cut down by the Zimmermans in 2009.

For these reasons, Humboldt State University has also gotten involved in the battle, asking city the city council to request a full 600-foot setback on the property, which is located a quarter mile from the university’s newly acquired 884-acre forestland.

Despite the city’s lack of awareness on this parcel’s recent county permitting process, the Zimmerman’s grow site has long been a concern — so much so that the property was listed as one justification for why the city needed to acquire more forestland in recent grant proposals.

“Staff used this as a case in point when applying for grants when expanding the community forest because it’s visible on Google Earth, right on our boundary,” Andre said, “Because of a concern about forest fragmentation and the watershed in general, and a rationale for why we needed to buffer our community forest that the city purchased in 1944, to protect it.”

A photo of the property taken last month. | Calfire

While the city has no actual say in the matter, Senior County Planner Cliff Johnson said the county planning department will seriously consider Arcata’s requests when presenting a recommendation to the Planning Commission.

“The Planning Commission will be the ones to make the decision,” Johnson said. “When confronted with requests to reduce the setback to public lands, in forming our recommendation we do take very seriously the input of the affected public agency. At this point we are planning on recommending that the project be revised as necessary to accommodate the city’s recommendation, which I understand from the council meeting is to be a 150-foot setback with reforestation and no-build easements, as feasible to accommodate the existing development.”