Local Players Continue to Impress as Crabs Prepare for the Blues

Ray Hamill/HumboldtSports.com – The Humboldt Crabs will welcome the San Luis Obispo Blues to the Arcata Ball Park this weekend.

After splitting a two-game midweek series with Seals Baseball, the Humboldt Crabs will welcome the San Luis Obispo Blues to the Arcata Ball Park for a three-game series this weekend.

The Crabs have struggled at home so far, winning just two of eight games in Arcata, but with the roster now filling up, they’ll be hoping to step up their game.

Three local players on the team this season have all been contributing.

Former Fortuna and CR standout Kokko Figueiredo has been a consistent presence for the team, playing in all 10 games so far and batting an impressive .316.

In his second summer with the team, Figueiredo has shown his versatility and discipline at the plate, hitting two doubles, a triple and a home run, while also drawing a team-high eight walks.

Also in his second season with the team, McKinleyville’s Dylan Campbell has carried over from a very impressive spring at Mt. Mercy University, and has been one of the Crabs’ most reliable arms out of the bullpen.

In seven innings, Campbell has given up six hits and has an ERA of 1.28, with 10 strikeouts.

In his first year with the team, meanwhile, Eureka’s Aidan Morris has settled right in, playing in nine games and hitting .257 with five RBIs.

The Crabs, who are 4-6, have collectively provided some power at the plate this season, blasting seven home runs in their opening 10 games, including three by Bryce Kirk and two from Damian Henderson.

Kirk is enjoying an outstanding early season with the team and is batting a team second-best .351, while also leading the way with 10 RBIs.

Dawson Bacho is batting a team-best .368 in his five games with the Crabs.

On the mound, Davonte Butler has been the most impressive of the team’s pitchers but has gotten little or no run support in his two games.

Look for Butler to start again this weekend.

After dropping this week’s opener against Seals Baseball on Tuesday, the Crabs battled back to take game two on Wednesday by a score of 7-2.

The Crabs scored all seven of their runs early, including four in the bottom of the fourth, and they made them count, holding the visitors to just one run over the final eight innings.

Figueiredo and Bacho each had two hits in the win, while Kirk had a home run and Carter Thompson a double.

Friday night’s game is set for 7 p.m., while Saturday’s game will take place in the afternoon and not at night because of Oyster Fest, starting at 2:30 p.m. 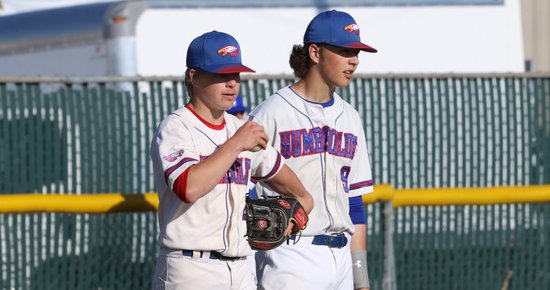 Eagles 17U Continue to Roll Against 76ers