« Two Arrested With Three and a Half Pounds of Meth, Numerous Firearms in Mitchell Road Traffic Stop This Morning 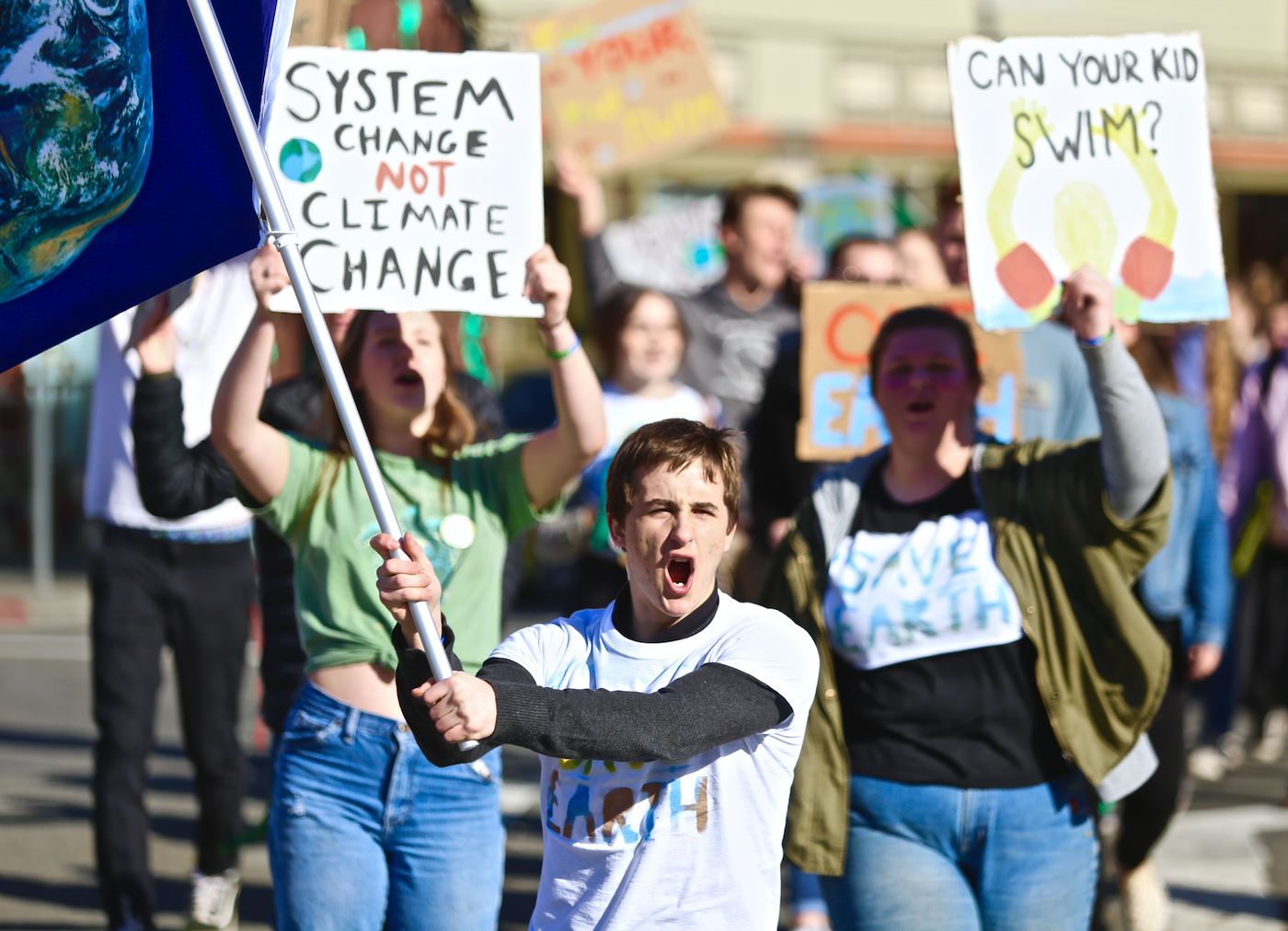 At 10 a.m. a mass of Arcata High students gathered in front of their school and, armed with colorful protest signs, marched toward the Arcata Plaza, some shouting “No coal! No oil! Keep the carbon in our soil!”

Under an unseasonably warm sun, the crowd of roughly 300 people (mostly students, but joined by some community members) then amassed in center of the Plaza to hear speakers discuss the environmental state of our planet and what can be done about it.

“As a whole, the adults of our generation have failed us,” said sophomore Leah Ider to the crowd. Ider was among several students who expressed an anger toward older people for not having taken climate change seriously enough.

But, like many other speakers, Ider also was hopeful that her generation is passionate about these issues and seemed inspired by the group present today. “Real change starts small and builds on itself a little at a time,” she said.

Arcata City Councilmember Sofia Pereira also spoke during the protest, highlighting some of the steps the City has been taking to combat and prepare for climate change, including banning plastic bags, prioritizing trails and adopting a community bike sharing service. She also thanked Congressman Jared Huffman for sponsoring the Green New Deal.

“We have been working to make Arcata a zero waste City,” Pereira said, standing in the space that used to hold the McKinley statue. “It’s an ambitious goal. But we can do it if we work together.”

Pareira told the Outpost that she was hopeful to see so many students protesting today. “I think it’s really great that students are stepping up and saying we want a different future for ourselves,” she said.

Arcata High senior Milo Mateer closed out the morning’s speakers, with an impassioned call to his peers to not be apathetic and to continue take action against climate change.

“It is easy in this day and age to call out problems without calling out solutions. But you right now are seeing the solution. This is action. This is change,” Mateer shouted to the crowd. “We solve this by every one of you right here, right now, finding your love, finding your passion, your voice and protecting it with your life.

Milo Mateer adresses his fellow students at the Arcata Plaza.

Arcata High was not the only local school participating in the Climate Strike today. At 11 a.m. a group of Eureka High School students also joined their fellow youths around the world in the protest against climate change inaction.

Organizer Stella Saba, a Eureka High sophomore told the Outpost that she thought it was important for her school to take part in today’s protest.

“It’s in support of the Green New Deal and letting our elected officials know that we demand climate justice,” she said. Saba was also helping pass around a petition for her fellow students to sign.

After gathering on the school house steps, the group then marched down I street and gathered on the lawn of the Humboldt County Courthouse. Though in much smaller numbers than Arcata’s protest, the protest garnered enthusiastic support, with passing  cars frequently honking in approval.

HSU Professor Sarah Ray spoke to the young people, applauding them for their efforts and reminding them that they were representative of a huge movement going on today.

“You guys should be proud of yourselves. Over 80 percent of your generation is very concerned about climate change,” Ray said. “This is just the beginning of change.”

Scroll down for a look at more photos of the Arcata and Eureka High protests.