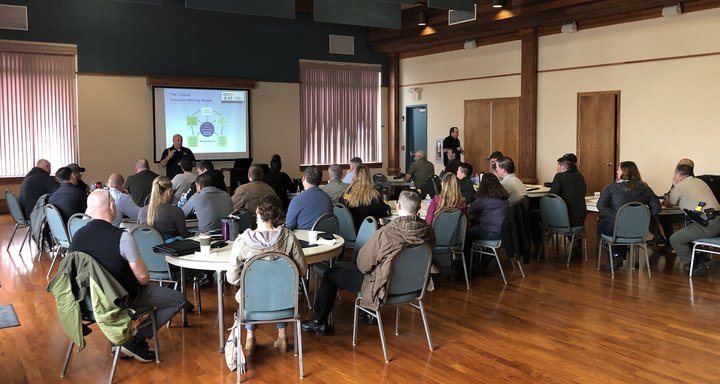 Photo of the training provided by EPD.

On May 14th and 15th, 2019, local law enforcement agencies participated in a one-and-half-day train-the-trainer course for defusing critical incidents which was hosted by the Eureka Police Department.

The course of instruction, ICAT (Integrating Communications, Assessment, and Tactics), is a new and innovative approach to de-escalation and use-of-force training. ICAT provides first responding law enforcement officers with the tools, skills, and options they need to successfully defuse a range of critical incidents.

The training focuses on situations involving persons in crisis and those who are armed or unarmed with weapons other than firearms, including individuals experiencing a mental health crisis.

Founded on research findings and best practices, ICAT was developed by the Police Executive Research Forum (PERF) with input from hundreds of law enforcement professionals nationwide.

During the training session, highly experienced ICAT trainers led an in-depth discussion and demonstration of how to implement the ICAT training program at your agency.

This hands-on exploration covered topics including:

On the second day, students participated in realistic scenarios requiring them to apply the tactics and communications skills they’d learned. Using the ICAT model, the Eureka Police Department will be planning additional training for its officers over the coming months and years. Several of the other participating agencies have indicated they plan to do the same.