« ‘The Trust Has Been Broken’: Eureka City Council Votes to Interview Finalists for $370,000 Marketing Contract Again, With New Set of Panelists 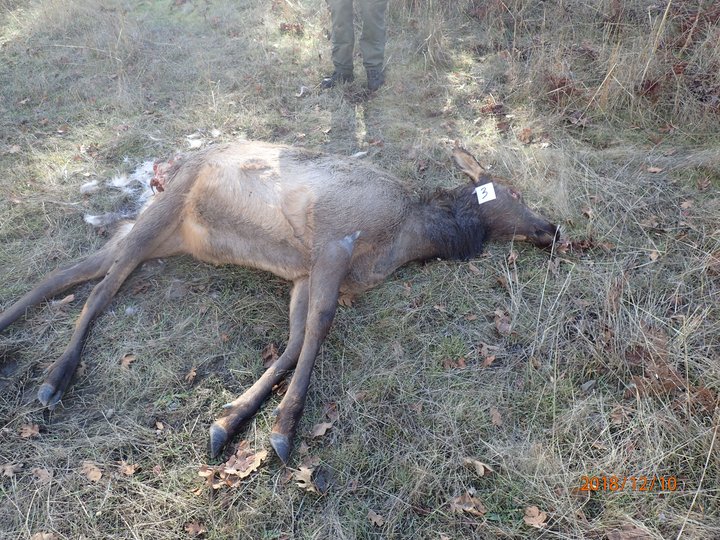 Photos of the Maple Creek poaching provided by the CDFW.

CalTip, a confidential witness program run by the state to catch poachers and polluters, is offering a $2,500 reward for anyone that provides information leading to the arrest of the person or persons who shot four Roosevelt Elk to death in Maple Creek last December.

A limited number of Roosevelt elk hunting tags are handed out each year. However, elk hunting season was not open at the time these animals were killed.

“This poacher shot these animals and left them for dead,” CDFW Law Enforcement Division District Capt. AJ Bolton is quoted as saying in a press release. “The vast majority of hunters are ethical and law-abiding citizens, but this is poaching, plain and simple.”

Another Roosevelt elk was also illegally shot to death with arrows north of Orick in October of 2018. However, the CDFW has not stated whether or not these two incidents may be related.

Read more in the CDFW press release below:

The California Department of Fish and Wildlife (CDFW) Californians Turn in Poachers and Polluters Program (CalTIP) is offering a reward of up to $2,500 for information that leads to the arrest and conviction of the poacher responsible for killing four Roosevelt elk in Humboldt County last December.

On Sunday, Dec. 9, 2018, CDFW wildlife officers responded to a poaching report in the Maple Creek area, southeast of Blue Lake. There they discovered four dead Roosevelt cow elk and evidence that they had been killed with a firearm. One elk was pregnant.

CDFW closely manages the state’s Roosevelt elk herds. A limited number of hunting permits are available for this species in Humboldt County and some hunters wait more than a decade to be successful in the drawing. Elk hunting season was not open at the time these animals were shot, and CDFW is asking the public for help with any information that may help bring the poachers to justice.

“This poacher shot these animals and left them for dead,” said CDFW Law Enforcement Division District Capt. AJ Bolton. “The vast majority of hunters are ethical and law-abiding citizens, but this is poaching, plain and simple.”

CDFW extends its thanks to four non-governmental hunting organizations that pledged the reward money to help solve this case. Those organizations are California Bowmen Hunters, California Houndsmen for Conservation, the Oranco Bowmen from Ontario and the Orange Belt Field Archers.

Wildlife officers are continuing their investigation, including processing evidence left at the crime scene. CDFW asks that anyone who has any information regarding this poaching crime to contact the statewide tip hotline, CalTIP, at 1 (888) 334-2258. Tips can also be sent via text to CALTIP, followed by a space and the message to tip411 (847411).

CalTIP is a confidential secret witness program that encourages the public to provide CDFW with information leading to the arrest of poachers and polluters. CalTIP operates closely but independently from CDFW’s Law Enforcement Division and is funded exclusively from private donations.