« PREP BASKETBALL — Plenty of Teams in Action This Week

‘We Need the Food That We Lost.’ Low-Income Families Still Reeling From Blackouts »

In a Wild Meeting, the Planning Commission First Deadlocks, Then Denies the Humboldt Wind Energy Project 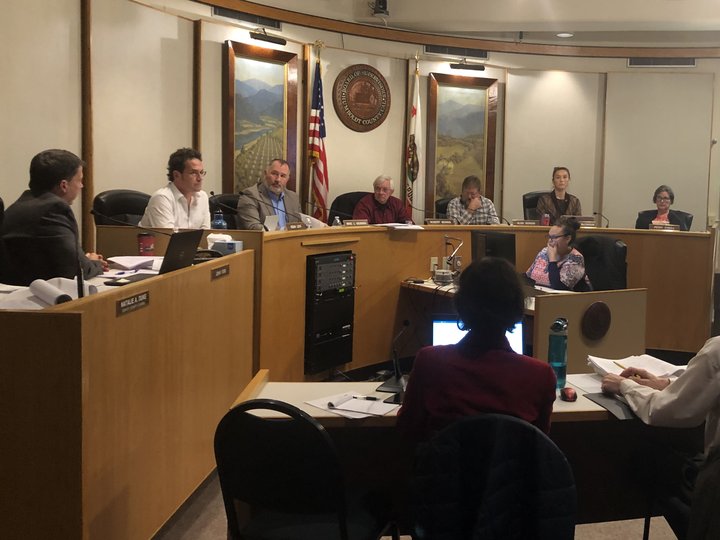 In a meeting that featured more drama, suspense and unforeseen plot twists than a season finale on HBO, the Humboldt County Planning Commission wound up denying the Humboldt Wind Energy Project on Thursday night, setting the stage for an appeal to the Board of Supervisors.

The decision came at the end of a five-hour meeting — the third five-hour Planning Commission meeting in as many weeks on this highly controversial project — and for a while it looked like things were headed in the other direction, toward approval.

But when it came time to vote, the commission deadlocked, with three members voting to approve the required permits and three voting to deny them. (The commission’s seventh member, Brian Mitchell, was not present to break the tie.)

Finally, after some confusion and more discussion, the commission took up a motion to deny the project, and when one of them unexpectedly changed his position, the vote passed and the project was denied, 4-2.

Here, briefly, is how it went down:

Many said they stand with the Wiyot Tribe, which opposes the project for a variety of reasons, foremost among them that Bear River Ridge (which they call Tsakiyuwit) is a sacred place, part of their historic territory that’s now in private ownership.

Others suggested that the applicant, Terra-Gen, is effectively a wolf in sheep’s clothing, a green-washed arm of its rapacious, fossil-fueled parent company, Equity Capital Partners.

And still others argued that the project’s environmental impacts, including harm to birds, bats and native plants, were not worth the supposed benefits.

On the other side of the debate, project supporters spoke about the need to take immediate action to combat the climate crisis, which threatens to upend life as we know it, unleashing draught, rising seas, wildfires and unbreathable air and creating untold numbers of climate refugees.

They noted that the project would supply enough clean, renewable energy to power 70,000 households and would displace 384,000 metric tons of carbon dioxide per year.

Public feedback during these recent meetings has persuaded county staff and Terra-Gen’s personnel to add more mitigation measures to the proposal in hopes of appeasing critics and getting the project passed.

On Thursday night, county staff said a few more such mitigation measures had been added, including the formation of a technical advisory committee (TAC) to study bird and bat activity near the project site; a commitment not to use herbicides or rodenticides; increased monitoring efforts, including the use of scent-detection dogs; and the establishment of a point-of-sale site here in Humboldt County, which would allow all equipment purchases for the project to generate local sales tax revenue.

These new measures didn’t appear to convince any members of the public in attendance to change their minds, and during a second public comment session the passionate appeals continued. Speakers ranged in age from a senior who appeared befuddled when his allotted time had run out to a nine-year-old who boldly told commissioners, “You need to put in the windmills” or else birds will die, animals will die and “we will die without reaching adulthood!”

When the matter finally came back to the commission, the members asked some clarifying questions of staff and of Nathan Vajdos, Terra-Gen’s senior director of wind development.

When these questions had been answered, the meeting underwent a dramatic shift in tone as Commissioner Melanie McCavour delivered a lengthy disquisition, outlining in scrupulous detail the role of the planning commission, her own personal and educational background, the particulars of research she’d conducted on the matters at hand and, eventually, her conclusion.

It was a thing to behold, this speech, nearly as impressive in elocution as it was in substance. Over the course of about 15 minutes McCavour celebrated the shared environmental ideals among those who have chosen to live in Humboldt County; lamented the “acrimonious partisanship” that has gripped our nation; emphasized the importance of making evidence-based decisions; and cited relevant scientific papers recently published in respected academic journals.

Eventually, some hints at her position began to emerge. She scoffed at a mitigation measure that would allow the Wiyot Tribe to identify flora from the project site so that it may be removed and preserved.

“The idea that we are pulling up plants and offering them to the tribes is embarrassing,” she said. “I mean it’s shameful. It’s insulting.”

She argued that the Environmental Impact Report (EIR) for the project is lacking. Among other deficiencies, she said, it fails to adequately assess the impacts on invertebrates and insects.

She also said she’d reached out to various people, including someone she knows at the David Suzuki Foundation — “probably the most well-known climate and biodiversity foundation in Canada” — seeking feedback from the perspective of these internationally renowned experts in their fields.

“I’ve had many people write me, all saying, ‘You will make the international news for trying to put an old-style wind farm on sacred ridges in the world’s only temperate redwood rainforest,’” McCavour warned. “Is that really what we want to do? I don’t think so. In fact, I know we don’t want to do that.”

She said it’s not worth trading valuable cultural resources for a project that would make “a tiny, tiny dent” in accommodating — “let’s face it” — Southern California’s energy consumption.

“If you look at it from a global perspective,” she said, “it sounds, honestly, not just insulting but crazy.”

McCavour’s comments drew applause from the audience. Fellow Commissioner Alan Bongio said hers was “a tough act to follow,” then went on to say, “I’m gonna give you a bit more of the Humboldt perspective, from my perspective.” (McCavour is from Canada.)

Bongio’s comments were brief, by comparison. He said there’s value in keeping large tracts of land un-subdivided, and this project would allow that. And he said development projects in Humboldt County almost always get shot down.

“We say no to everything; it’s time to give something a try,” he said.

Commissioner Mike Newman decried NIMBY-ism and said the county needs its own source of renewable energy: “This wind project will get us on the path of more self reliance.”

Commissioner Peggy O’Neill cut right to the chase: “I do not support this project,” she said, drawing whoops of approval. “I’ve listened to the community that will be most impacted tell us they don’t want it, for good reasons. … If the community doesn’t want it, we shouldn’t move forward with this project.”

That brought the matter to Commissioner Noah Levy. He thanked the public who’d shown up to these three long meetings and quoted a couple of speakers whose comments had resonated, including a man who’d argued the commissioners should take whichever course of action they would regret the least.

“I think anyone who thinks this is an easy call is missing something,” Levy said. If it were as simple as some people seem to think, he continued, then how could smart people like those on the commission — all of whom care about the community, the environment, birds and bats, the climate — reach different conclusions?

“Frankly, Melanie, I feel the need to direct that comment a bit to you,” Levy said. He credited her with doing “informative homework” but said he felt she seemed to have “vastly oversimplified the arguments” in favor of one side over the other. “I’m a little bit insulted,” he said, adding that there are “strong arguments on both sides.”

Regarding the argument that people should simply “stand with the Wiyot Tribe,” Levy said denying the project wouldn’t necessarily result in the preservation of the sacred property in question. Bear River Ridge is owned by the local Russ family, and the ranchers may choose to subdivide it if the project isn’t approved. And Monument Ridge is “a heavily managed industrial forestland owned by a company that recently had its management practices take turn for the worse,” he said.

He then delicately suggested that giving local tribes veto power over any project might not be the best approach to planning decisions.

“It appeals to a certain sense of emotional justice, and it certainly recognizes the incredible historical wrongs that have been done,” he said. “But is that actually how you think our planning processes should go? Because if so, we don’t need the Planning Department or the Planning Commission.”

All of this seemed to suggest that Levy was prepared to approve the project.

Commission Chair Robert Morris, the last to speak his piece, said he’s lived in Humboldt County for 70 years, and his lineage goes “back to the Mattole Indians.” He listens to evidence to see if proposals fit in with the county’s general plan and refrains from making policy decisions because those are not his purview, he said.

Morris mentioned PG&E’s Public Safety Power Shutdowns and said, “I think something needs to be done.” Like Bongio, he stressed the importance of keeping large parcels intact, and he commended the Russ family as stewards of the land.

“I believe the Wiyots are much better served by keeping these areas in large ownerships,” Morris said.

So the stage was set for the vote.

But then Levy started talking again. He apologized to McCavour for calling her out inappropriately and then rambled a bit, saying members of the public have managed to change some of his views.

“Fundamentally, even if I might lean — barely — toward thinking it’s better to do this than not, I have to say, despite the good-natured heckling, I’m moved by the passion of the good people who showed up.”

He then changed topics, saying he’s uneasy with the amount of new information that’s been presented last-minute, including documents submitted immediately before the meeting.

Newman made a motion to certify the EIR, make all the necessary findings and approve the project.

Levy spoke up again. “Is there anyone else up here who might prefer continuing this [discussion] two weeks out so we can fully digest the final versions [of the EIR] and allow for our seventh colleague [to weigh in]?” he asked.

Morris called for a roll-call vote, and when asked for his vote, Levy paused. After several beats he said, “I’m afraid I’m a no.”

The commission didn’t know what to do next. John Ford, the county’s director of planning and building, suggested they ask each other whether any changes to the motion might persuade someone to change his or her vote. Alternatively, he said, staff had prepared a different motion, one that would deny the project. They could vote on that.

Bongio asked to hear from the applicant, and Vajdos said Terra-Gen just wanted a definitive yes or no vote.

None of the commissioners had any suggestions for changing the motion, though Levy said he might have been prepared to vote “yes” with a continuance to a later date.

After a bit more discussion, McCavour made a motion to deny the project. O’Neill quickly seconded it.

Another roll call vote ensued. Should the project be denied? Levy: “Yes.” Newman: “No.” Morris: “No.” Bongio … hesitated. Then, in a whisper: “Yes.”

The crowd erupted in cheers. Morris shot Bongio a look, and Bongio vaguely shrugged, then leaned over to say something to him. McCavour and O’Neill voted yes, and that was it. The project was denied.

However, that’s not the end of the Humboldt Wind Energy Project — not yet, anyway. As the mostly jubilant crowd broke up and headed for the doors, a woman approached Vajdos and asked him if Terra-Gen would be appealing this decision to the Board of Supervisors.