The three H-DNL teams competing for a North Coast Section championship in football this Saturday all have a few key things in common.

They all have talent, great coaching, and senior leaders who set the tone for their respective teams.

“Definitely, and I don’t think it’s just one guy either,” Ferndale head coach Clint McClurg said. “We have different types of leaders. We have vocal leaders and guys who lead by example. I really love the leadership by example by our guys.”

Senior Landon Gomes is one such player, and has been holding himself and his teammates accountable all season, while teammates such as Nico Alejandre, Tristen Martin and Dominic Regli have each also set the example for their younger teammates.

“Niko, he plays with a certain level of mental and physical toughness,” the Ferndale head coach said. “He really does respond well. He’s trying to go out there and play to the best of his ability, and at the same time he plays with a mental focus.”

The example set by these veteran seniors has a knock-on effect to the team’s younger players.

“That type of leadership is priceless,” McClurg said.

Del Norte and St. Bernard’s each also have plenty of senior and veteran leadership, both vocal and by example.

The Warriors feature 15 seniors on a roster of 26, including players like Anthony Slayton and Luke King who have been leading the way on this dominant team all season.

The Crusaders, meanwhile, are younger but feature a core group that has been setting the tempo since the offseason.

“His leadership this year has been really something special,” SB head coach Matt Tomlin said of Thrap.

Likewise with Will Omey and Justin Hagler, the latter setting a high standard on the defensive side of the ball.

“Our seniors are so focused on wanting to win a section championship,” Tomlin said.

That can be seen in the way the Crusaders approach practice, with the veteran players making sure everyone is prepared and ready to go, especially this week.

That’s something the Del Norte players have also ensured, and the Warriors have prepared for games as well as any team in the H-DNL and beyond all season long, something that has a lot to do with the team’s leadership.

The Ferndale Wildcats too have benefitted from the presence of their leaders, with Regli inspirational in more ways than one.

“He doesn’t say a lot, but it’s just the way he conducts himself,” McClurg said of the senior lineman who has been one of his team’s most consistent performers all fall. “Everything he does right now, you know you’re getting his best effort.” 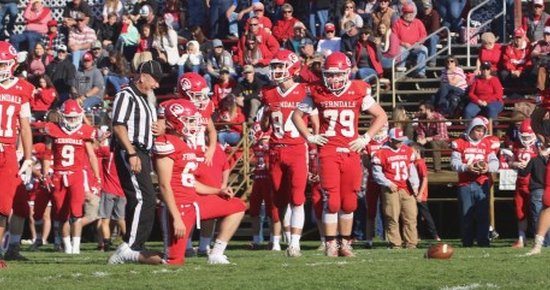