‘Ruthless’ Tigers Get Their First Win

The Arcata Tigers showed their ruthless side on the way to their first win of the season at the Redwood Bowl on Saturday afternoon.

Facing an undefeated Willits team and the prospect of an 0-3 start to the season for the second straight year, the Tigers needed this one for a lot of reasons, most importantly to get their season going.

And they didn’t disappoint, turning in what head coach Jamal Jones described as a “ruthless” performance on the defensive side of the ball, as they shut down a potent Willits rushing attack in a 20-7 win.

Arcata’s Niko Zambras pulls in a spectacular 66-yard TD catch on the run during Saturday’s game.

“We had to figure out how to win,” Jones said. “We hadn’t won with this group, but they put it all together and they did some special things today.

“We played ruthless defense. That’s the way we want to play defense.”

The Tigers gave up an early touchdown, which was set up on a big gain by Willits standout running back Jacob Arms, who had scored all seven of his team’s TDs coming into the game.

Aside from that one big early gain, the Arcata defense did its job containing the dangerous Arms.

Arcata’s Everett Halikas breaks free for a 54-yard run to set up the Tigers’ third TD of the day.

A key moment in the game came on a big goal-line stand late in the third quarter with the Tigers leading 14-7.

The Tigers defense stood firm, recovering a fumble at their own two on a second and goal for the visiting Wolverines.

The offense then took over and quickly marched 98 yards on three plays to open up a 20-7 lead, with sophomore receiver Carson Tucker breaking free down the sideline on a 40-yard TD reception from quarterback Mathew Robinson, his third scoring pass of the game.

Instead of the game being tied going into the fourth quarter, the home team suddenly led by a pair of TDs.

And with their defense playing as well as it was, that would be more than enough.

Senior lineman Maximus Rice continues to anchor the unit and has been a dominant and inspirational force this season, while the ever-consistent Matteo Vincent caused the visitors problems all afternoon.

Ethan Miller also had a big afternoon on the defensive side of the ball.

Willits running back Jacob Arms pulls in a reception.

Robinson threw a pair of touchdowns in the second quarter as the Tigers came from behind to hold a 14-7 advantage at halftime.

The first was a beautiful deep pass to Niko Zambras, who made a spectacular catch on the run and took it to the end zone for a 66-yard play.

The second was on a four-yard pass to Raven Perez, who has been a notable bright spot early in the season for the Tigers.

The momentum went back and forth between the two teams in the second quarter, with Rice recovering a fumble for the Tigers and Robinson throwing a pair of interceptions.

Everett Halikas had a big afternoon running the ball for the home team, breaking free for a key 54-yard gain to set up Tucker’s second-half touchdown.

Injuries have not helped matters early in the season for the Tigers, who were missing three starters for Saturday’s game.

The victory improves the Tigers to 1-2 and gives them some much-needed momentum with league play fast approaching.

“We’re locked in,” Jones said. “We understand if we do what we have to do we can be special.”

The game was the first of three straight at home for the Tigers, who host Balboa next Friday night, before opening the Little 4 against Ferndale the following weekend. 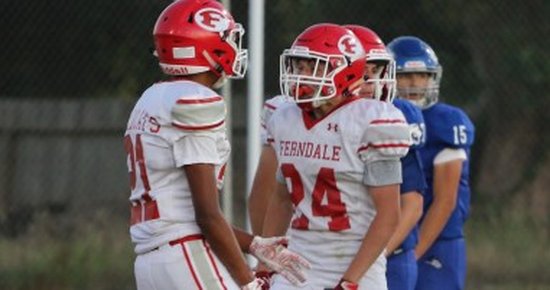 VIDEO — Two DBs, Two Spectacular Plays at the Milk Can