« (UPDATES) (PHOTOS) Emergency at the North Jetty; One Surfer Picked Up by Coast Guard After Companions Attempt Rescue

Photos by Ray Hamill/HUmboldtSports.com – The Ferndale defense dominated much of Friday’s Milk Can game.

Ferndale’s win at Fortuna in the annual Milk Can showdown was the highlight of the weekend in local football, but it wasn’t the only notable game.

Del Norte and St. Bernard’s each maintained a blistering start to the season with road wins, while South Fork climbed above .500 with a 44-8 win over Laytonville in eight-person football.

And that puts the nine local teams collectively above .500 for the first time this season.

Here then are five takeaways from the weekend action …

Winning the Milk Can is always going to be among the season highlights for whichever school is lucky enough to come out on top, but the Cats’ 13-7 win at Fortuna was a statement win in far more ways than that.

The Ferndale players dominated the line of scrimmage, especially on the defensive side of the ball, while also wearing down a young Fortuna defense with a strong running game by committee.

It was also the second straight win for the Cats, who will take plenty of momentum into this coming weekend’s game against St. Bernard’s, a second rivalry matchup in eight days.

With players like Orion Benton and Dominic Regli, among others, in impressive form, the Wildcats will also carry a lot of confidence from this victory going forward, and of all a sudden an inconsistent opening weekend loss to Clear Lake doesn’t look so concerning.

This week also marks the second straight week the Wildcats have risen in MaxPreps North Coast Section rankings, where they are now No. 4 in Division 7, up a total of seven spots from two weeks ago.

The Arcata players celebrate their win over Willits on Saturday.

It took each a little longer than hoped for, but both Eureka and Arcata got their first wins of the season over the weekend, with the Loggers winning comfortable 32-7 at Montgomery and Arcata rallying to beat Willits 20-7 at the Redwood Bowl.

In fairness to both, neither schedule has been easy, while each has also shown plenty of early-season promise despite their records.

Both teams will also look to build on the momentum of this past weekend going forward.

After two straight road games, the Loggers (1-3) return to Albee Stadium on Friday to host Shasta (1-2), while the Tigers are in the midst of a run of three straight home games and will host Balboa at the Redwood Bowl, also on Friday night.

3 — Crusaders know how to thrill

You don’t want to take your eyes off these guys, or some of their games.

No North Coast team has played in as many thrilling contests in recent years as the Crusaders, who are coming into the meat of their schedule with a number of mouthwatering clashes on tap in the coming weeks.

Last Friday, the Crusaders were at it again, as their high-octane offense more than matched the far bigger and deeper La Salle Falcons stride for stride, eventually winning 43-41.

We’ve come to expect this sort of entertainment from SB, and the Crusaders rarely disappoint.

Another week, another statement win by the Warriors, who traveled to Petaluma on Friday night and came away with a 49-7 victory.

Over the past three weeks, the physical Warriors have outscored their opponents 153-14 behind a deep and potent ground attack.

They continue to be the most impressive team on the North Coast this season.

It took a few weeks longer than we might have imagined, but the nine local high school teams are now officially above .500 for the first time this season, checking in with an overall record of 16-15.

Six of the eight teams in action over the weekend won their respective matchups, and four now have winning records, including SB and Del Norte, who are each 4-0, as well as Ferndale and South Fork, both 2-1. 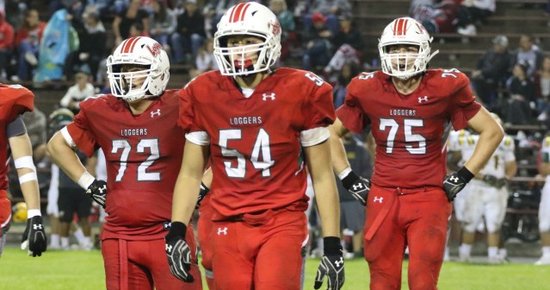