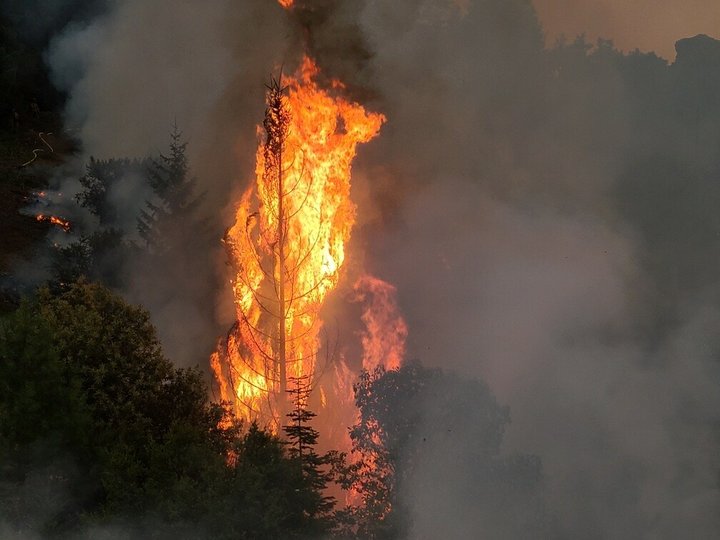 Photos of the Red Salmon Complex provided by the The Professional Fire Fighters of Nevada.

The 1,294 firefighters battling the blaze have worked to hold the fire at 35 percent containment for more than a week as they slog through the rugged countryside. During this time, the fire has more than doubled in size.

“The fire established near Prospect Peak is burning in very rough and rugged terrain,” California Interagency Incident Management Team 4 stated in a press release this morning. “Therefore, firefighters are not able to directly attack the fire safely.”

The fire is actively spreading to the south and to the east, while its westward growth is moving directly toward containment lines put in place by firefighters.

Cultural and historic sites have remained threatened since the fire ignited on July 27 due to lightning strike.

Red Fire: Securing the west and northwest sections remains a priority due to the values at risk in this area. Crews will again be focusing their efforts here increasing the depth of containment lines by burning off from established lines. The UAS was not able to complete burning operation as expected last night due technical difficulties.

The fire established near Prospect Peak is burning in very rough and rugged terrain. Therefore, firefighters are not able to directly attack the fire safely. Fire managers will instead use the 04 Road and a previously placed line along Highpoint Ridge to contain the fire. Managers are also taking advantage of the old Butler Fire burn area where fuels are much lighter than surrounding unburned areas.

Salmon Fire: This fire continues to burn within containment lines. The uncontained portion on the west side is burning into the Red Fire as fire managers had planned.

Weather: Thunderstorm potential continues to wane. A high cloud cover will gradually yield to sunshine on the fire later this afternoon. A gradual cooling trend will start today with relative humidity near normal levels. Winds will be light at 5-6 mph from the west.

Air Quality: Terrain driven winds will bring smoke down into canyons and valleys again this evening. Refer to fires.airfire.org/outlooks/NWCalifornia.

Closures: The Red Salmon Fire Forest Closure became effective on August 8, 2020. As hunting seasons open, hunters are reminded the closure is in place for their safety as well as the safety of firefighters. The full Forest Closure Order can be found on Inciweb. inciweb.nwcg.gov/incident/6891

COVID-19: California Interagency Incident Management Team 4 has implemented precautionary measures to prevent the spread of COVID-19 in both fire camp and the surrounding communities. These measures include daily temperature screenings, mandatory use of face coverings, social distancing, implementing more virtual work, and smaller fire camps. Community and firefighter safety are a top priority of both Team 4 and the National Forests.