« COVID and the Cannabis Industry, the Sorry State of Testing, Weddings and More: Humboldt’s Public Health Officer Takes Media Questions on the Pandemic

(PHOTOS) Comet ‘Neowise’ Seen Over Humboldt County; Here’s How to Catch It Before It Disappears for Another 6,800 Years 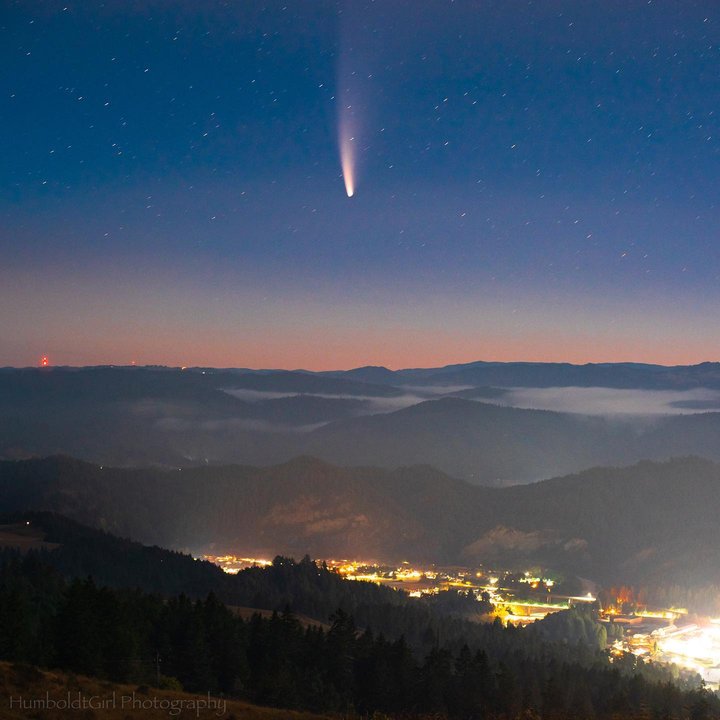 Neowise, the newly-discovered cosmic dustball that’s beaming past Earth for the first time in approximately 6,800 years, will become more visible in our evening skies this week.

The comet was initially more visible in the northeastern sky during the twilight hours before sunrise, as captured by local photographer Rene Yampolsky at 4 a.m. above Rio Dell yesterday. However, NASA reports that, starting tomorrow, Neowise will become more pronounced in the evenings immediately after sunset in the northwestern sky.

“Comets are notoriously unpredictable, so it’s impossible to know if this one will remain so easy to spot, but if it does, it should become easier for more people to observe as July goes on,” NASA said. “Its closest approach to Earth will be on July 22, at a distance of about 64 million miles.”

Meteorologist Jonathan Garner with Eureka’s National Weather Service Office told the Outpost today that stargazers will want to go to higher-elevation areas like Kneeland or Berry Summit to get above any low-lying clouds for the best possible view.

According to NASA, comets are “frozen leftovers from the formation of the solar system composed of dust, rock and ices. They range from a few miles to tens of miles wide, but as they orbit closer to the sun, they heat up and spew gases and dust into a glowing head that can be larger than a planet. This material forms a tail that stretches millions of miles.”

Neowise was initially discovered by and named after NASA’s Near-Earth Object Wide-field Infrared Survey Explorer, (NEOWISE) on March 27. Click here to read more about the Neowise comet from NASA, or here to watch time lapses of the comet from various locations in the Humboldt hills.