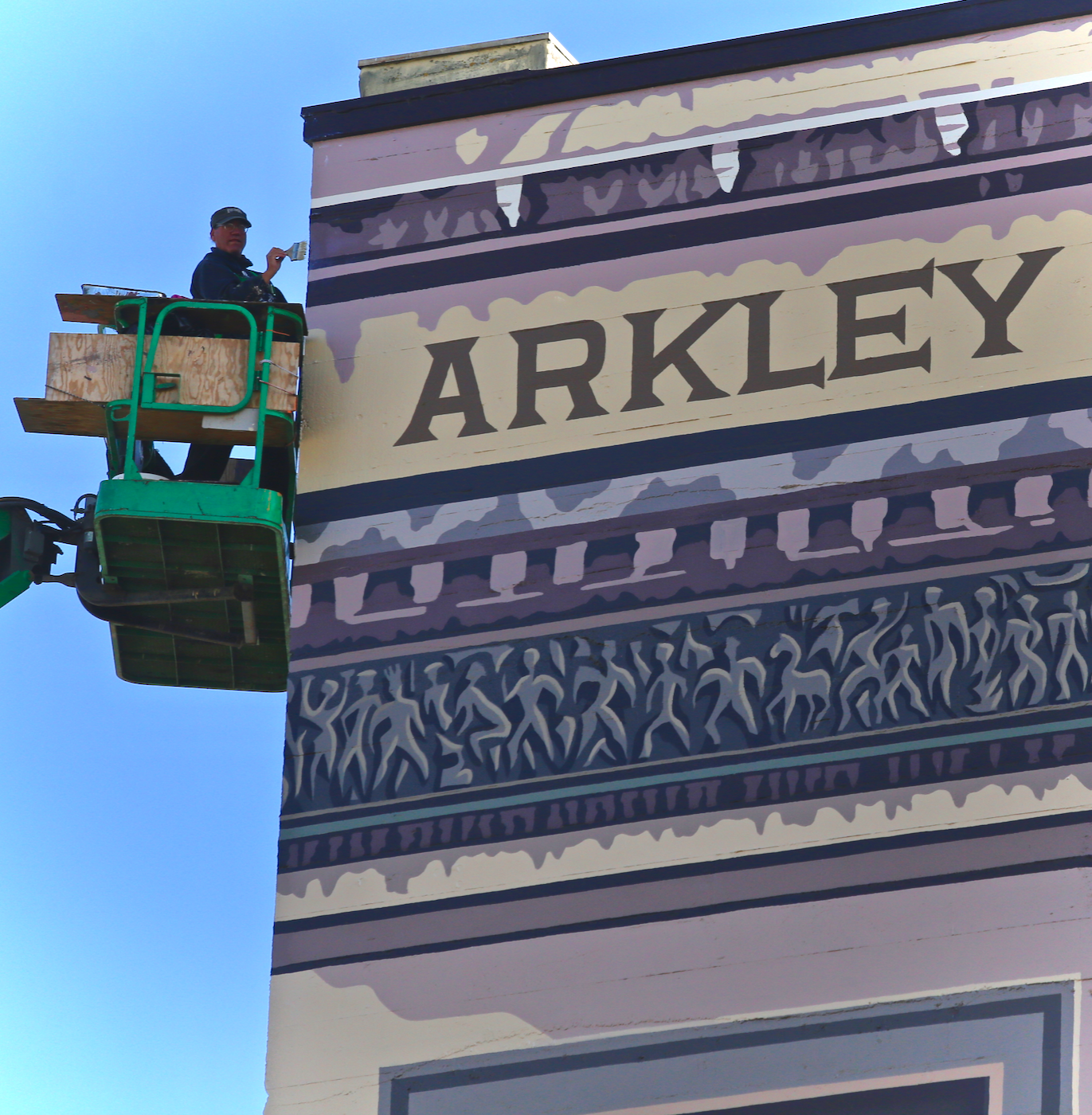 If you’ve happened to take a drive through downtown Eureka recently, there’s a good chance you’ve zoomed past famed local artist Duane Flatmo perched high in his scissor lift roost several stories above the pavement. For the past four-and-a-half months he’s been up there pressed against the massive 70 feet high, 60 feet wide back wall of the Arkley Center for the Performing Arts, painting away. It’s gone mostly OK.

“I had one can of paint drop from 30 feet up,” Flatmo confessed in a chat with LoCO earlier this week. “One can of orange. But I painted over it with the color of the asphalt, so you can’t tell.” 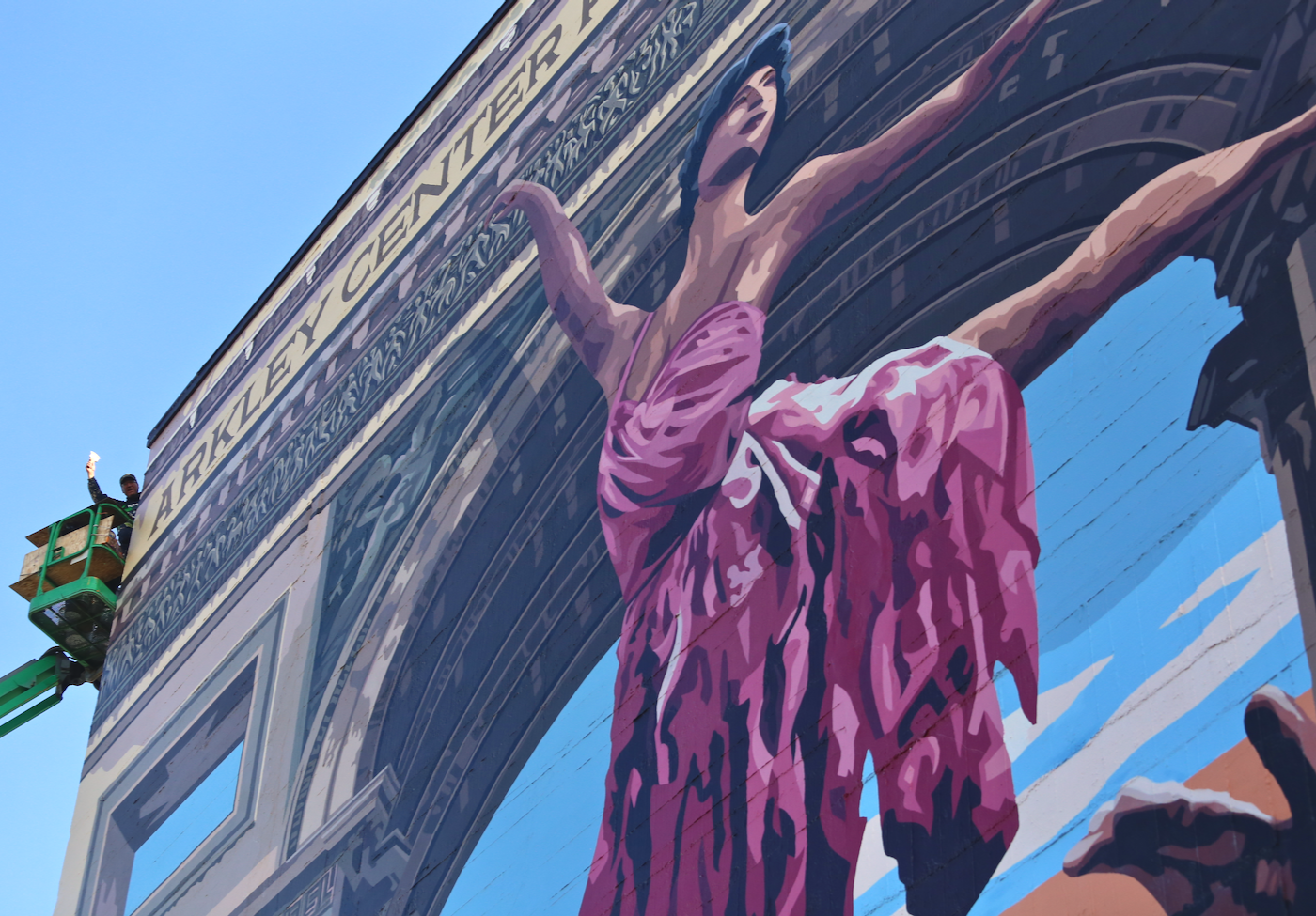 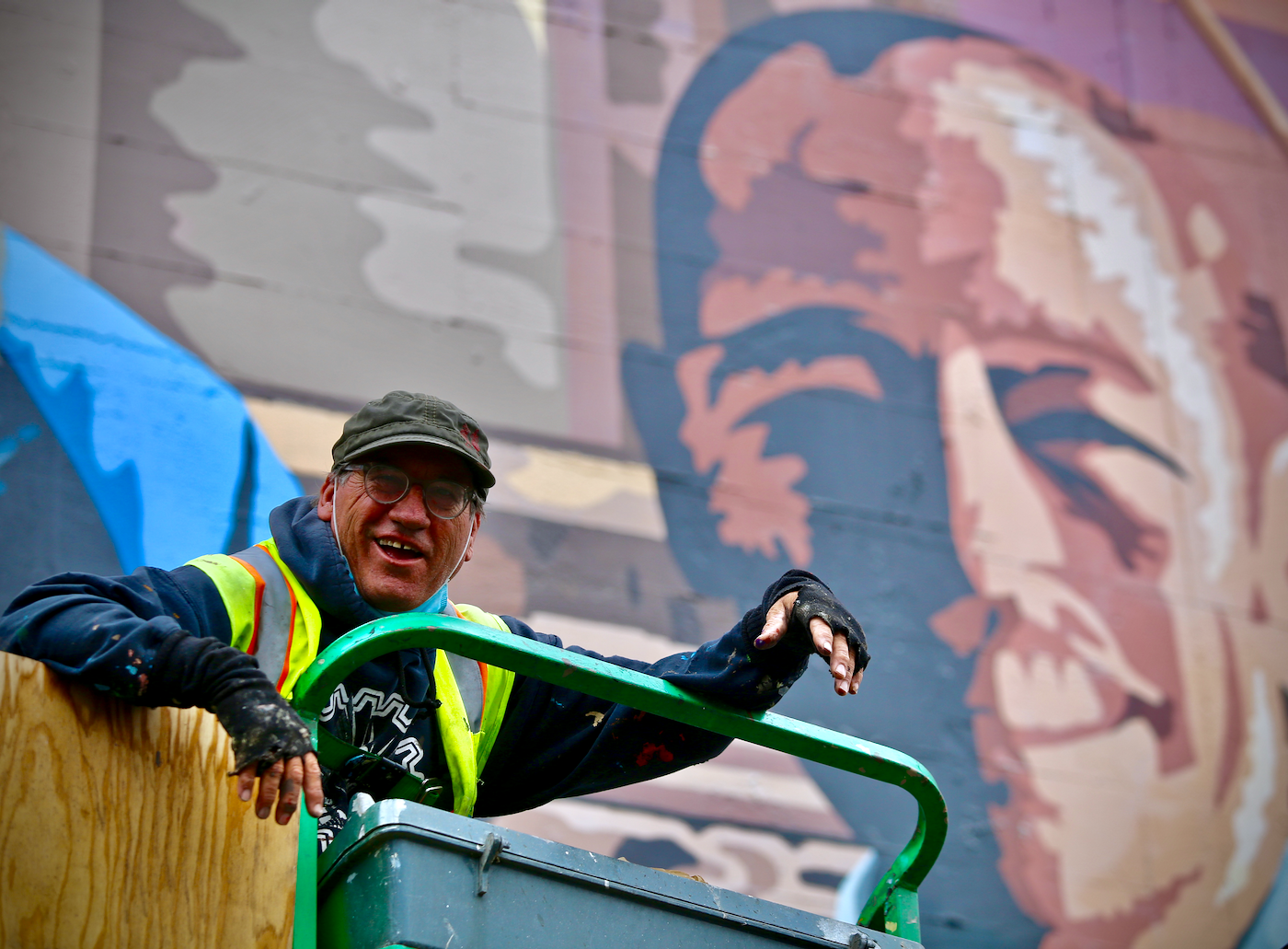 Well, if you’d planned to pester the painter with boisterous drive-by honks, LoCO must regretfully inform you that window has now closed. Never put off ’til tomorrow what can be done today. This week, Flatmo completed restoration work on his beloved Arkley Center mural that, over the years, had fallen victim to ghastly water damage subsequent to its initial painting back in 2007. The exhausted artist said he is glad to be done. The task was a challenge to the very end.

“You know, the last six feet of that mural had to be painted with a six foot stick with a paint brush duct taped to it,” Flatmo boasted after recounting that his lift couldn’t quite reach all the places he needed it to. “I think that’s pretty cool!” 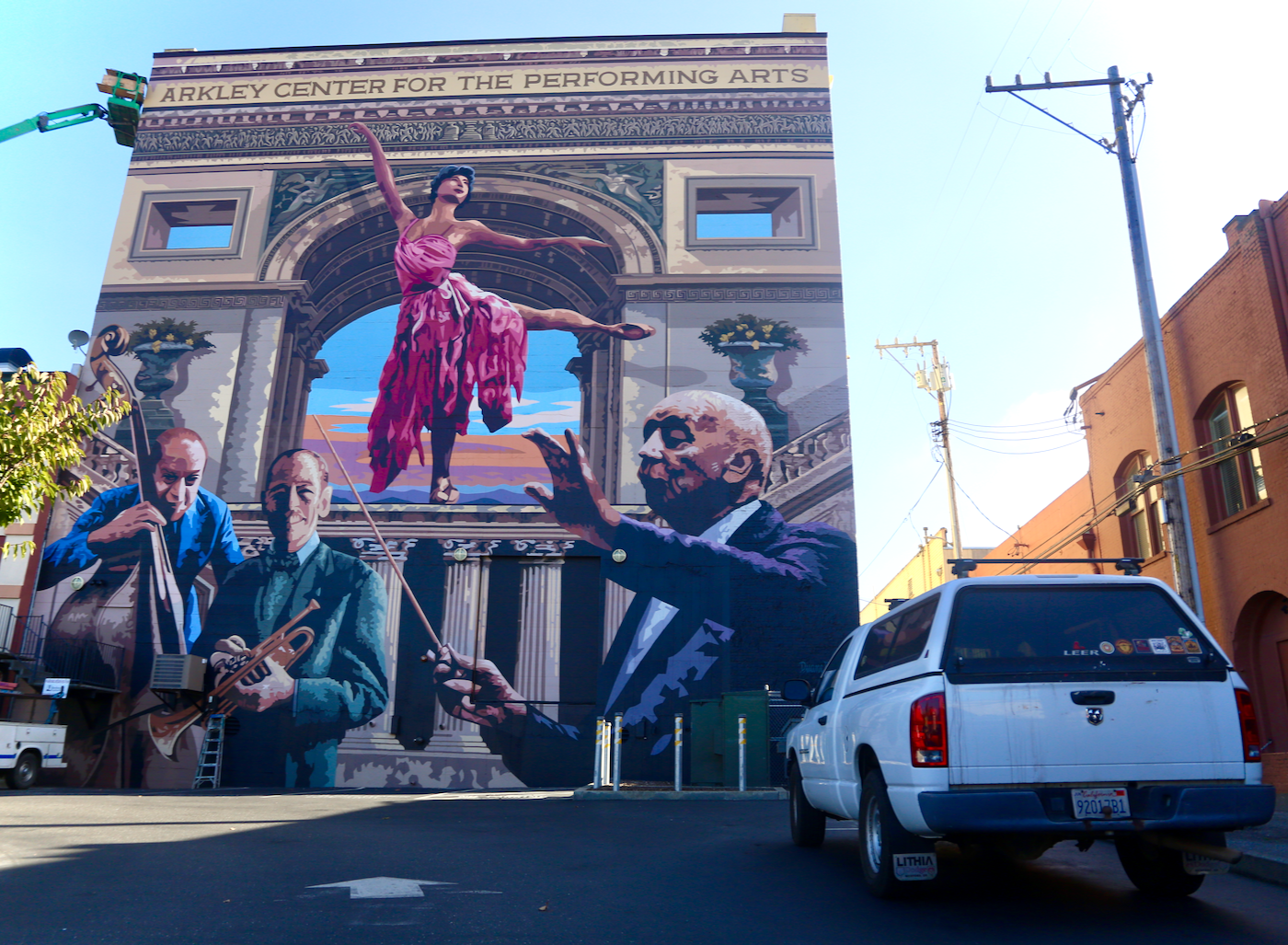 What’s also cool is Eureka has its largest piece of public art back. It was in August of 2019 that crews began scraping away at the edifice to prepare its surface for resealing. For nearly a year the Arkley Center existed with only half of the old mural on it. But Flatmo is quick to point out that he repainted the entirety of the piece.

“People think I only had to redo half of it, but I redid the whole thing,” Flatmo said. “I still had the design work from the last time I did it. It needed to be lined up with the lower section. So I redrew the top part to match the bottom part and then I repainted from the top down over the existing part of the mural so it all matched.”

Flatmo holds up the grid he used to guide his muraling | Photo: Blake Reagan

This time the mural should last longer. Before the more fanciful colors went up, local company Hamanaka Painting applied a base layer to the building which should allow the new mural to stick up there better than its predecessor, according to Flatmo. He hopes so, at least. “I don’t see myself getting up there again,” he said.

But even if the work was hard, Flatmo was happy to get the opportunity to preserve his mural. He came up with the design after a trip to France around the time the Arkleys approached him to see what ideas he might have for the space. He considers the result to be one of the most important works he’s ever produced.

“The top two things that I’ve done at this point in my life that I’m most proud of — that I just hit the mark on — are this mural and the El Pulpo Mecanico sculpture,” Flatmo said. “When you have a career that’s 40-something years you keep doing things where you say, ‘Oh, that’s my best so far … Oh, now that tops that thing.’ You’re leaving things behind you and hopefully getting better at stuff. Then you reach a point where you make what you think is your crowning achievement and then you go, ‘Now where do I go from here? How am I going to top this?’ That’s always been what drives me, you know. How am I going to top myself? So I hope I still have a couple in me that will impress myself.” 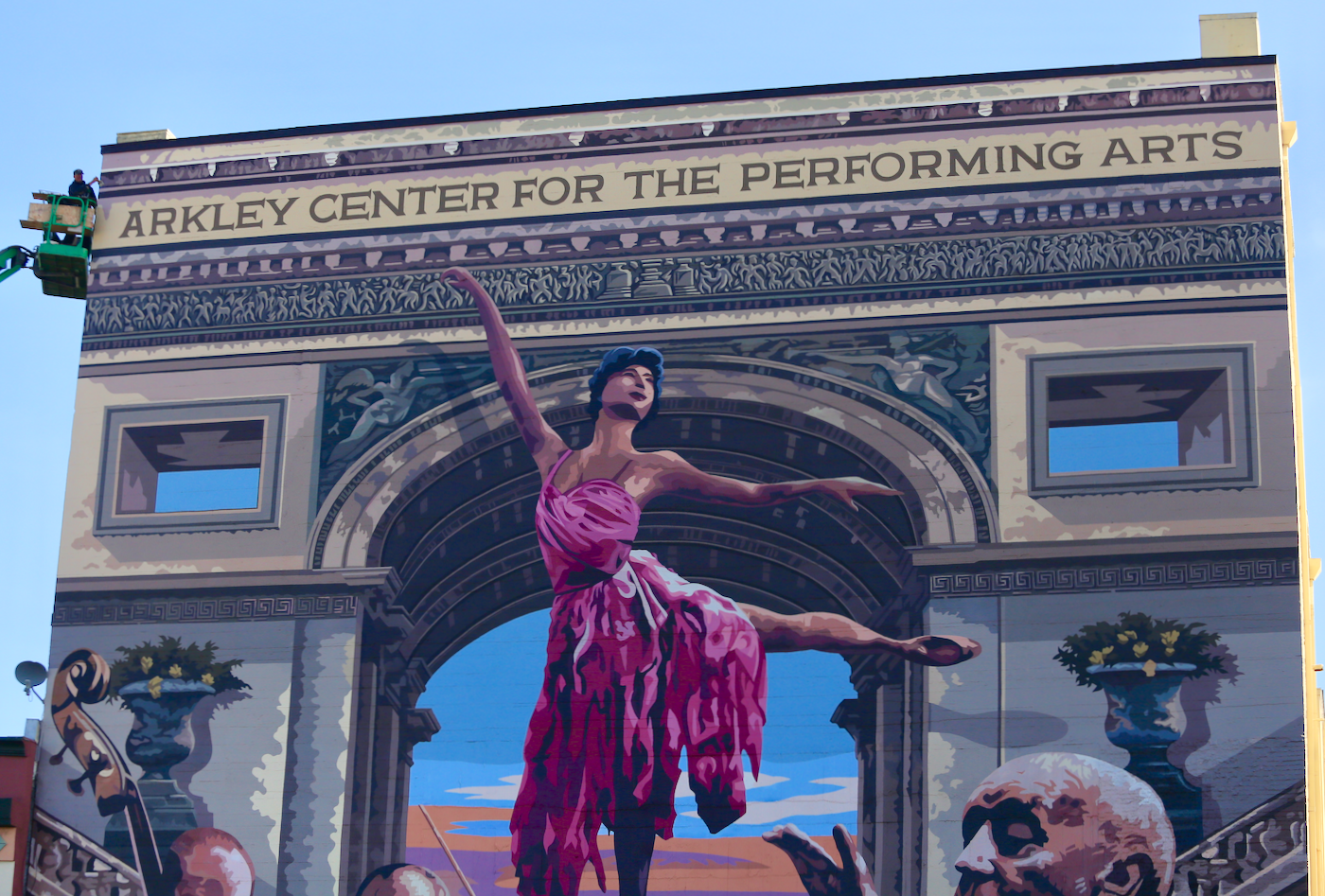 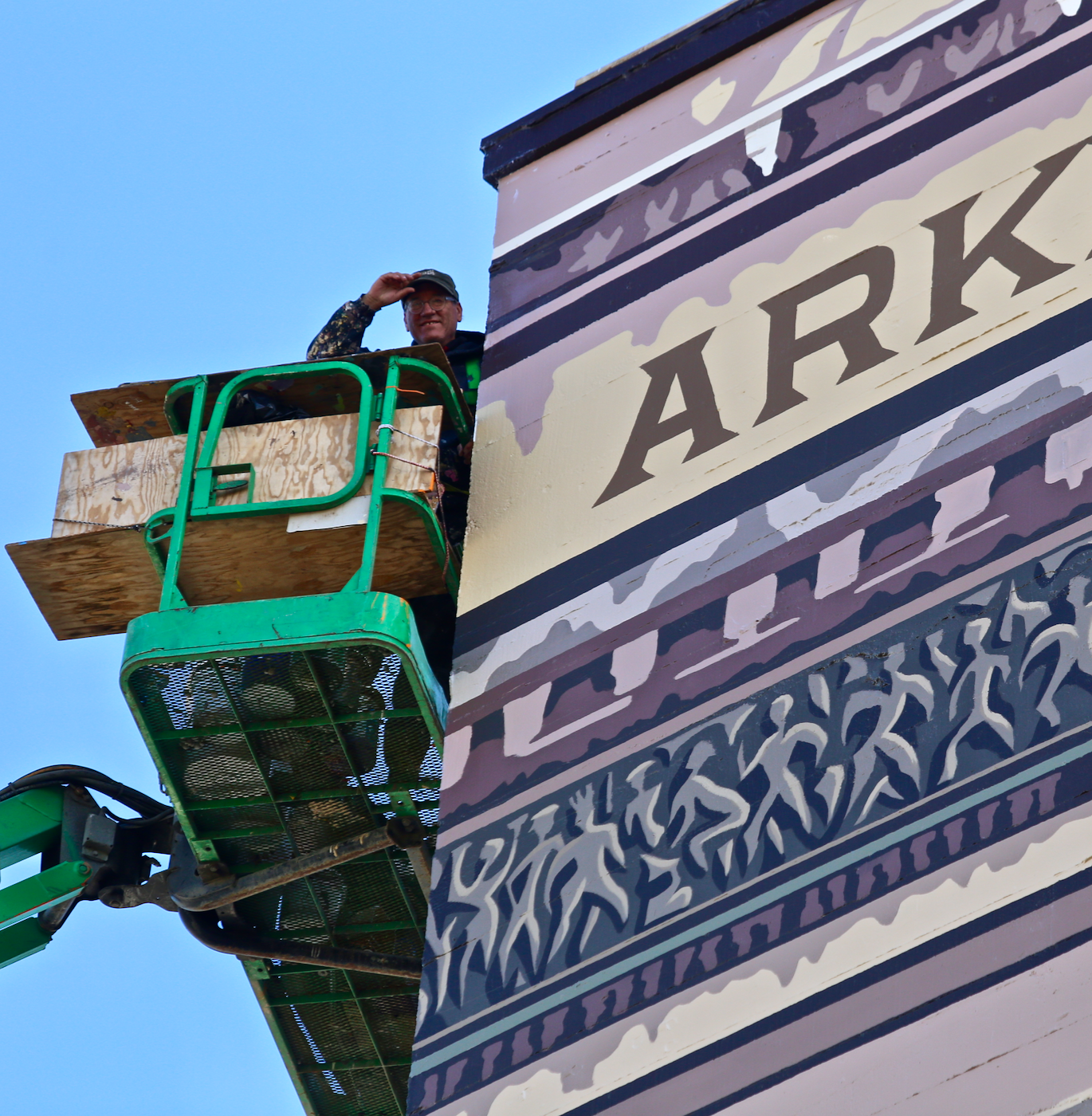 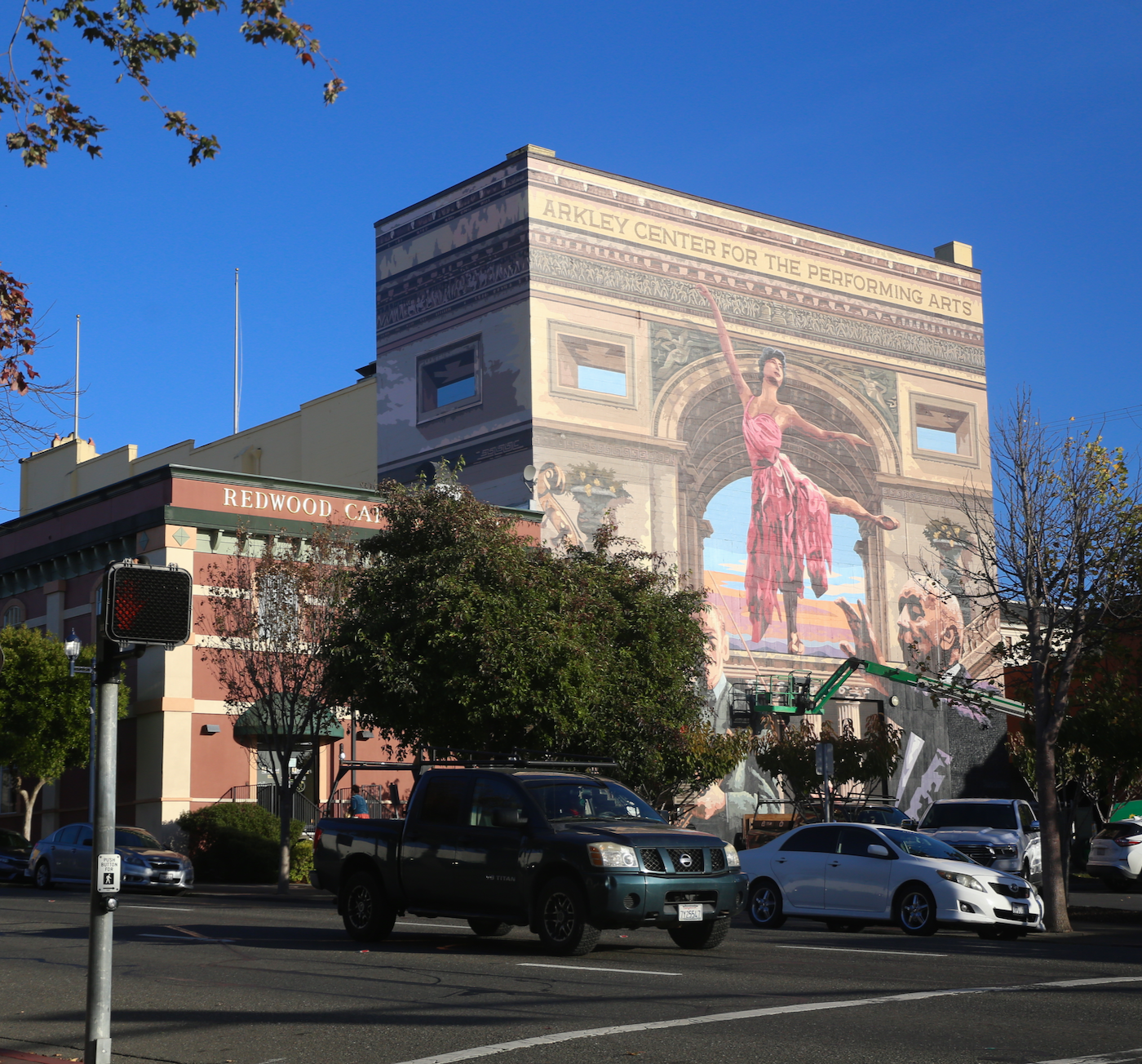