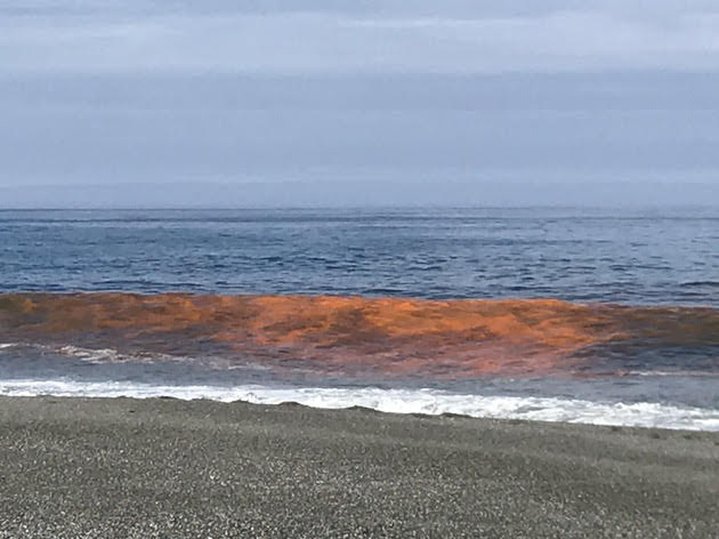 Photos of the shores near Big Lagoon this morning. | Mara Friedman

A local reader sent the Outpost these photos of tangerine waves crashing along the shoreline near Big Lagoon today.

“I was walking on the beach this morning, and though the sky was blessedly blue, there was a lot of orange stuff floating in the ocean,” reader Mara Friedman said.

While the reddish seas might seem like the latest biblical plague set upon Humboldt County, local biologists say that the coloration is likely a harmless bloom of phytoplankton.

Humboldt State University Professor of Botany Frank Shaughnessy and HSU Marine Lab Equipment Technician Grant Eberle both said that the substance appears to be Noctiluca, a dinoflagellate that produces some pretty neat colors.

“I haven’t actually gotten down to take a sample and look at it under a microscope, but my opinion form past experience is that it’s probably a bloom of dinoflagellate called Noctiluca, which tends to form pinkish, orangish or reddish slicks or blooms usually concentrated around the shoreline or in bays,” Eberle said. “They are fairly large single-celled algae that bioluminesce at night time. They can cause the waves to sparkle.”

While the blooms are non-toxic to humans, Eberle said that fish can sometimes be affected.

Eberle told the Outpost that he might collect a sample of the orange stuff later today to confirm his suspicions. We will update if we learn more.

PREVIOUSLY: People Thought There’d Been a Toxic Spill in Trinidad Harbor. It Turned Out to be Naturally Glowing Marine Life