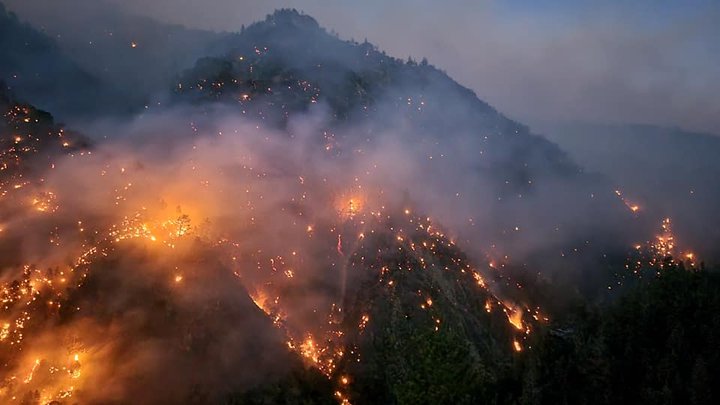 The Monument Fire burning along Highway 299 in Trinity County between Burnt Ranch and Weaverville has grown to 119,280 acres and remains 10 percent contained.

Public Information Officer Nathan Judy with the U.S. Forest Service told the Outpost that spot fires advanced the blaze into the boundaries of Junction City last night as the fire pushed east. However, he said that firefighters are protecting the community by actively extinguishing those fires.

“The fire remained active throughout the night and significant growth occurred to the east and southeast flanks,” the fire’s incident management team stated today. “Crews were confronted with gusty, northwest winds that continued to transport firebrands ahead of the fire front which supported the increase to 119,280 acres.”

A team of 911 firefighters is actively working to contain the fire.

American Red Cross evacuation shelters are set up at Shasta College at 1555 Old Oregon Trail, Building 1900 in Redding and at Trinity Valley Elementary School at 730 Highway 96 in Willow Creek.

The latest map of the Monument Fire. | InciWeb

A domestic animal shelter is in place at the Trinity County Animal Shelter at 563 Mountain View St. in Weaverville (530- 623-1370). Domestic and large animals can be taken to the emergency shelter at the Hoopa Rodeo Grounds on Pine Creek Road in Willow Creek.

The Highway 299 closure has been extended from Hawkins Bar to Oregon Springs Road due to the fire’s progress toward Junction City.

It’s unclear at this time how many structures have been damaged or destroyed by the fire.

Firefighters estimate that the Monument Fire will be fully contained by September 1.