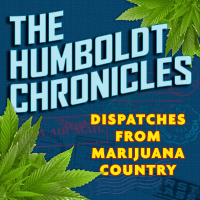 For our final episode in 2021, we sat down with former Humboldt County Supervisor Mark Lovelace, who is now Senior Policy Analyst for HdL Companies, in which capacity he advises cities and counties in California on cannabis policies. Our conversation with Mark included discussions of marketing, the value of the “Humboldt Brand”, the tax and regulatory structure in the cannabis industry, and the impact of the large unregulated cannabis market.

Large, well-funded corporate cannabis entities are operating in Humboldt County. Competing with these entities poses significant challenges for Humboldt's small, craft cultivators. Could forming and participating in co-ops offer advantages in this regard? In our October episode, we talk with Nicole Riggs, of the Center for the Study of Cannabis and Social Policy, which, along with Cooperation Humboldt, recently completed a survey of cultivators to measure interest in co-ops. We also spoke with Drew Barber, a member of the Uplift Co-op.

Cannabis cultivators and others at the production step in the supply chain are required by California regulations to use a distributor to bring their products to market. In our September episode, we take a look at the sometimes cumbersome and expensive distribution system within the cannabis industry. Our guests are Shenell Kress of humboldt.farm, and Tara Gurley of Proper Wellness Center.

Our August episode examines the persistence of the unregulated market in Humboldt County after Prop 64 legalization, and considers some theories as to why the market continues to thrive. Our guest is cannabis entrepreneur Chip Baker.

For July, we continue our discussion of the effects of cannabis legalization on the economy and culture of Southern Humboldt. Our guest was Sunshine Cereceda, owner of Sunboldt Grown.

For June, we began a multi-part discussion of the effects of cannabis legalization specifically on Southern Humboldt. Our guest was Hezekiah Allen, a SoHum native, cannabis policy analysist and educator.

Chuck and Larry talk about some stuff.

Federal, nationwide legalization is a development that will potentially have a profound impact on the Humboldt cannabis industry. And while we've been hearing about its inevitability for a long time now, it remains uncertain when, or even if, it will ultimately happen. In our April edition, we took a look at the state of legalization in the US, both at the federal and state levels, and we took a special look at the legalization effort in Idaho, where advocates are facing especially aggressive opposition from the state legislature. Our guests were Jackee Winters of Kind Idaho and Russ Belville of the Idaho Citizens Coalition.

Cannabis businesses don't have access to many services other types of businesses enjoy. Banking is more difficult or impossible, interstate commerce is not allowed, and access to capital, such as small business loans, is limited or non-existent. Humboldt County government, together with the local cannabis industry, created Project Trellis in an attempt to remedy this imbalance. We spoke with Scott Adair and Peggy Murphy of the Humboldt County Office of Economic Development about Project Trellis.

Last year, the US House of Representatives passed the MORE Act, which lays out a framework according to which cannabis legalization at the federal level might occur. While the MORE Act has not yet been taken up by the Senate, it raises a host of issues that merit consideration as legalization measures proceed on Capital Hill. Our guest is Ross Gordon, who is Policy Director at the Humboldt County Growers Alliance.

To start off the new year, we took a look outside of Humboldt County to see what we could learn. Oklahoma implemented a medical marijuana program in 2018 pursuant to a voter initiative. To help us understand the very different way Oklahoma chose to roll out it's cannabis market, we spoke with journalist Paul Demko of Politico.

The November episode examined the ways in which cannabis businesses face regulatory and other hurdles that non-cannabis businesses do not, and what might be done to level the playing field. We also took a look at the cannabis-related implications of the recent national election. Our guests included Joanna Hossack of LA law firm Clark Howell, LLP, and Craig Nejedly of Satori Wellness.

For October, we spoke with Ross Gordon of the Humboldt County Growers Alliance, Craig Nejedly of Satori Wellness and Congressman Jared Huffman about a cannabis marketing assessment currently being considered by the Humboldt County Board Of Supervisors.

In the September episode, we examined the potential implications of the November election on the chances for cannabis legalization. Our guests included Congressman Jared Huffman, and Jared Moffat, of the Marijuana Policy Project in Washington, DC.

In the August episode, we took a look at coming January 2021 implementation of the CDFA's cannabis appellation program and spoke with Dr. Hollie Hall, of Compliant Farms, about the Appellation of Origin Baseline Study.

In the July episode, we spoke with a local dispensary owner about the trials of opening a new business in the midst of the COVID-19 pandemic. Our guest was Chrystal Ortiz of Herb & Market Humboldt.

In the May episode, we spoke with three local businesses, each at a different point in the supply chain, to examine the effect of COVID-19 and the shelter-in-place procedures on the Humboldt cannabis industry. Our guests were Andelain Roy of Dew Point, Craig Nejedly of Satori Wellness, and James Hardin of Bear Extraction House.

In the March episode, we examined cannabis appellations and took a look at newly proposed rules issued by the California Department of Food and Agriculture. Our guests were Ross Gordon, Policy Director at the Humboldt County Growers Alliance and Genine Coleman of Origins Council.

In the February episode, we took a deep dive into soil and it's critical role in cannabis cultivation. We also spoke with a Humboldt farmer who takes a very unique approach to her craft. Our guests were Michael Beck of Royal Gold Soils and Jill VanderLinden of Organic Medicinals.

In the January episode, we took a look at some of the policy and regulatory changes coming in 2020 as well as changes desired as the cannabis industry evolves. Our guest was Ross Gordon, Policy Director at the Humboldt County Growers Alliance.

In the November episode, we took a retrospective look at the state of cannabis legalization in California from a market and regulatory perspective over the last two years. Our guests included Ashley Toms of River Day Farm, Erica Gray of Permanent Holiday, Ross Gordon of Humboldt County Growers Alliance, and Tara Gurley of Proper Wellness Center.

In this episode, we took a look at the track and trace system, or METRC, that has been implemented in the regulated California cannabis market. Is it working? Is it necessary? Our guests included Joe Wynne from Sisu Extracts and Richard Parrott, Director of CalCannabis Cultivation Licensing, California Department of Food and Agriculture.

Our guest for the September edition of the Chronicles was Humboldt County Sheriff William Honsal. We spoke with Sheriff Honsal about the Sheriff's Office's enforcement activities regarding non-permitted cannabis grows and related topics.

In the August edition of The Humboldt Chronicles, we spoke with local leaders in the cannabis industry about opportunities for women. Our guests were Terra Carver of Humboldt County Growers Alliance, Andelain Roy of Dew Point and Jaymi Dark of Dark Staffing Solutions.

In the June episode of The Humboldt Chronicles, we looked at the complicated distribution chain in the cannabis industry. Our guests included Andelain Roy of DePoint and Craig Nejedly of Satori Wellness.

In May, we examined the impact that cannabis legalization has had on the overall retail economy in Humboldt. Our guests included Jayce Walker from Eco Groovy Deals, Meredith Maier from Six Rivers Brewery and Gregg Foster of the Redwood Region Economic Development Commission.

In April, we took a look at two ostensibly similar cities — Fortuna and Rio Dell — that are taking decidedly different paths in their implementation of Proposition 64. Our guests included Mayor Sue Long of Fortuna, Mayor Debra Garnes of Rio Dell, and Nick Angeloff of Archaeological Research and Supply Company.

In the March episode, we examined the potential of cannabis tourism on the North Coast with a particular focus on the City of Eureka. Our guests included Rob Holmlund, Director Of Development Services for the City of Eureka and Eureka City Councilperson Austin Allison.

In the February episode, we focused on three Humboldt companies that have been able to navigate the difficult tax, regulatory and competitive challenges and create successful businesses and local jobs. Our guests included Bryan Willkomann from Humboldt Patient Resource Center; Joe Wynn and John Figueiredo from Sisu Extracts; and Guy Rocourt from Papa & Barkley.

In the January episode, we examined the role that co-ops can play in the cannabis marketplace, with a specific emphasis on the advantages they might offer to industry professionals in Humboldt County. Our guests were Drew Barber and Dylan Mattole of the Uplift Cannabis Cooperative and Hezekiah Allen of Emerald Grown.

For the December show, we took a look back at some of the highlights from past shows. We talk about the formation of the connection between Humboldt County and cannabis; a patent mystery and the value of The Humboldt Brand.

In the November episode, we looked at the results of the mid-term elections and the impact of the results on cannabis regulation. Our guests included and Congressman Jared Huffman, Eureka Mayor-Elect Susan Seaman and Eureka City Councilpersons Austin Allison, Natalie Arroyo and Kim Bergel.

In the October episode, we examined medical cannabis from both a consumer and a provider perspective. Our guests included and Harry Balance and Nigel Wallach from Arcata-based Heart of Humboldt dispensary.

In this episode, we explore the impact of cannabis legalization on the culture and economy of Southern Humboldt. Our guests include attorney and blogger Eric Kirk and Humboldt County Supervisor Estelle Fennell.

Our guest is Terra Carver, Executive Director of the Humboldt County Growers Alliance and we discuss the state of legalization so far — what's working and what needs to change.

In the June episode, we examined the value of the Humboldt Brand, both in a cannabis and non-cannabis context and explored possible ways to maintain and increase the value of the brand. Our guests included Mary Keehn, founder of Cypress Grove, Briar Bush, National Sales Manager for Lost Coast Brewery, Joshua Kappel, Partner, Vicente Sederberg LLC and Sean Trainor, CEO of Sensi Valley, Inc.

In this episode, we spoke with Bryan Wilkomm of Humboldt Patient Resource Center and John Dalby, CEO of Redwood Capital Bank regarding banking and finance in the cannabis industries.

In the February episode, we examined the local implementation of Proposition 64 in a few areas of Humboldt County and also took a look at the present situation and future implications for Southern Humboldt. Our guests were Kym Kemp, Publisher of news blog The Redheaded Blackbelt, Kevin Jodrey, Owner of Wonderland Nursery, and Rob Holmlund, Director, City of Eureka Development Services Department.

In this episode, we spoke with Ray Markland of Eco-Cann in Eureka and Nate Wittington of HCGA about the challenges of doing business in an industry that is legal in California but illegal in the eyes of the US Department Of Justice. We also spoke with Cong. Jared Huffman and Mason Tvert, Vice President at VS Strategies in Denver, CO.

In this edition of The Humboldt Chronicles, we take a look at some of the changes coming our way on January 1 as Proposition 64 is implemented in Humboldt County. Guests include Patrick Murphy (Public Policy Institute of CA), Mike Wilson (Humboldt County Supervisor), William Honsal (Humboldt County Sheriff) and Patrick Finnegan (CPA).

In this episode, we continue our look at the history of marijuana in Humboldt County and also take a peek at what the future might bring. Guests include Dr. Dominic Corva, Hezekiah Allen and Anna Hamilton.

The Humboldt Chronicles: For residents of Humboldt County, there's no telling how much of their spending money has filtered through the local marijuana industry. Or is there? Hear from a banker, a grower, a business owner, and an economist. See lostcoastoutpost.com for more.