Your Week in Ocean: The Ocean is Scary 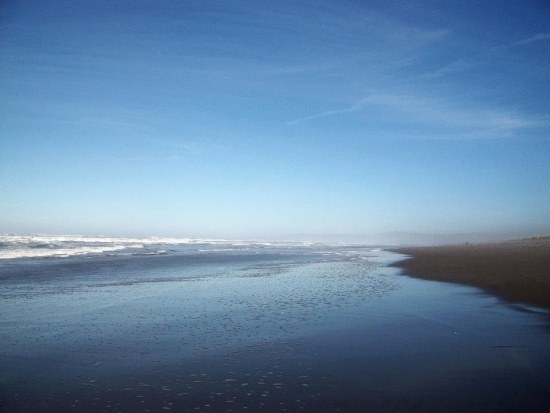 An invitation… to doom.

What a morning, all sunshine and blue and beautiful! Although at this point in our dry, dry winter, waking up to clear skies barely registers. But even as the lack of rain creates unease, it also entices people to the beach. If we have to suffer through sunny days, why not do it in the most glorious of places? Like the siren’s song, the ocean calls. No wonder NOAA and the Coast Guard keep sending out warnings.

My family spent some time at the beach yesterday. Between my personal interactions and my Facebook feed, a significant percentage of Humboldt’s population did the same. The cautions for “sneaker waves” were high and widely shared. And rightly so – the swell today is running 7 at 18, 6 at 20, slightly larger than predicted with a forecast of more of the same. Compared to yesterday, the waves are larger and further apart. Because the sets come less often, the danger of underestimating the ocean is greater. Whether you’re paddling out into it or walking alongside it, odds are, unless you regularly pay attention, a lot more is happening out there than you think. And that lot more can scare the hell out of you – and worse.

Here’s a cautionary tale: Several years ago, on a day with conditions much like today, I took my dog for a walk on the beach. Now, I pay attention to the ocean. I check the swell and tides almost every day. I’ve written safety missives for other publications and personally warned people to please not walk out on the jetty or let their kids play in the shorepound at Big Lagoon. So I have no excuse for what happened other than I was lost in thought about life and forgot to pay attention.

Until I noticed the ocean gathering into itself. The water had receded further than before. Mountains were rolling in from the horizon. This was winter and, as happens in the spot I stood in, the sand dunes had been carved into 12-foot cliffs impossible to scramble up. My only escape was to try and outrun the oncoming freight train. So I ran.

I was still running when the ocean smashed into me, lifted me off my feet. I hit my ankle on a log as I kicked trying to stay on the surface. Whitewater foam covered my face, filled my mouth as I sucked for air. I was sure I was going to get pulled out to sea and die at this point. Regret filled my heart. My family would be so sad.

This was not a good place to be. Somehow I managed to catch my footing as the waves subsided, was able to scramble to safety (where the dog was, of course, wagging her tail in wait). I shivered the entire two miles home, but at least I wasn’t dead.

We’ve lost a lot of people to the ocean in the 16 years I’ve lived in Humboldt. Many other have had near misses similar to my experience. This is just one more story rehashing what we already know: pay attention, don’t turn your back, sunshine does not equal safety. When warnings become too regular, we risk forgetting they exist for a reason. Nonetheless, I encourage you to be careful out there, especially today.

Further, a resource you can use to clue yourself in to what’s happening with the swell and the tides before you trek down to the sand: NOAA’s marine page for the Eureka area. It’s got everything you could want to prepare yourself for time in the ocean and time around it.