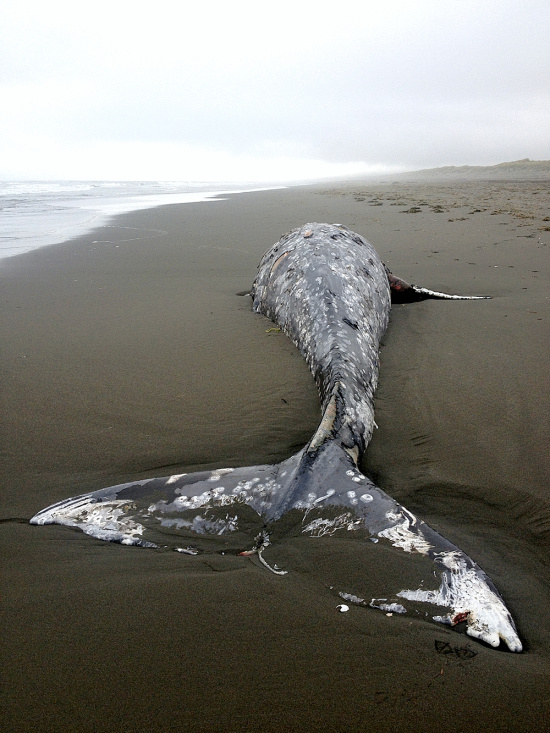 Yesterday dawned blue, bright and warm, bringing Humboldt to the beach in droves – most notably to Friends of the Dunes’ 18th annual Sand Sculpture Festival. Today is already toasty, but the gray sky heralded a beach visit somewhat less celebratory. The high tide had transformed yesterday’s magnificence into damp lumps – castles made of sand and all that – as well as deposited a dead juvenile gray whale just down the shore.

I’d been expecting both, having witnessed the aftermath of the dunes contest many times during my years here in Manila and having seen mention of the whale on Facebook last night. Still, despite the life and death cycles of both sand sculptures and whales being a natural thing, a certain melancholy colored the scene. The crew of ravens circling through the gray sky, the vulture that reluctantly flapped away as I approached – inevitable fodder for those of us with poetic dispositions. 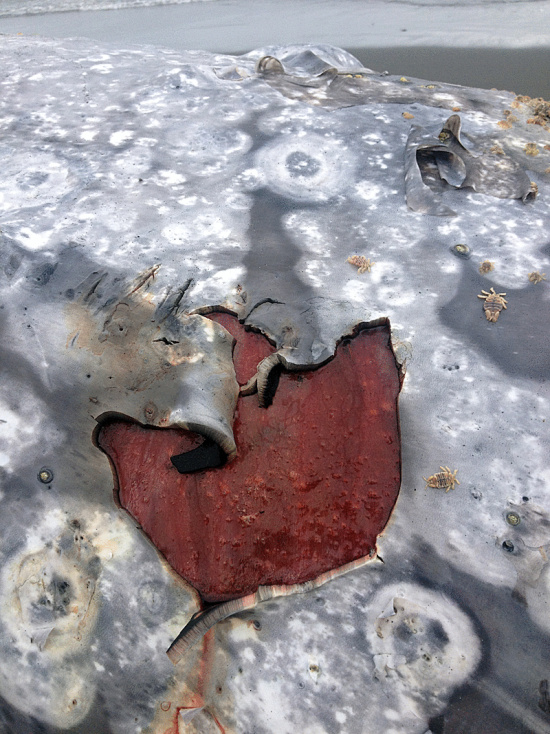 Note: I am not a whale expert. I hope the cause of death was natural, and I didn’t see anything obviously saying otherwise, but until some science type takes a gander, the reason for the whale’s demise is unknown. (If the whale died from choking on plastic in the ocean – as happens, people – or being struck by a ship, expect more serious commentary.)

So, yeah, a dead whale on the beach saddens me, the same way seeing a deer or a cat splayed out on the side of the road tugs at my heart. It’s unfair to the possums (ick) and raccoons (horrible things) whose deaths fail to move me, but the former are hideous and I’ve had to chase the latter off my porch far too many nights for me to have much sympathy. And spending as much time at the beach as I do means I’ve come across more seal, sea lion and seabird carcasses than I can remember. (Sometimes marine mammals get rescued, hooray.) 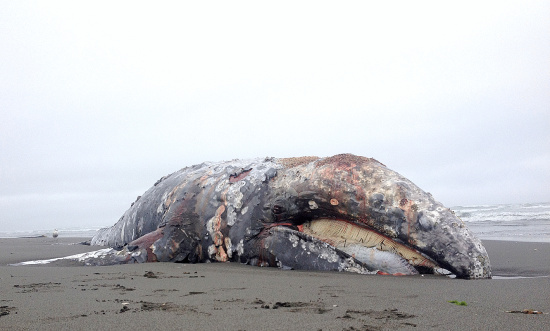 But along with the “Poor thing!” reaction is the less sentimental, far more practical observation of, “Wow, that’s one gut-wrenching stench.” If our dear old yellow mutt was still around, she’d have had a field day rolling in, along and into a giant stinky dead thing.

Oh, the repeated experience of yelling, “Nooooooooo!” as she flopped over and scritched all over some rotten animal flesh. Her joy was no match for my disgust. I’ve heard stories of a dead whale that wound up in the boneyards between Moonstone Beach and Camel Rock – awful tales of dogs who dug in and wouldn’t come out. The best method I’ve used for eradicating the stink from your faithful companion is a mix of peroxide, baking soda and soap.

Today’s supposed to clear up, warm up. If the beach calls you, be aware of the sad, stinky whale action outside Manila. Your dog is supposed to be leashed or under voice command, anyway, and today is an especially good day to go elsewhere or be attentive to the law. If more information arises concerning the dead whale, I’ll pass it on.

UPDATE: Bird Ally X was on the scene the evening prior with HSU prof and whale expert Dawn Goley. 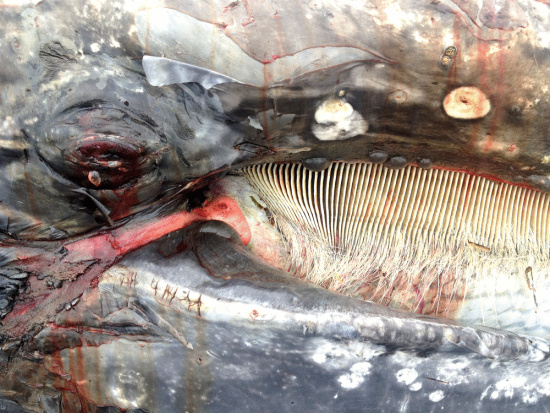