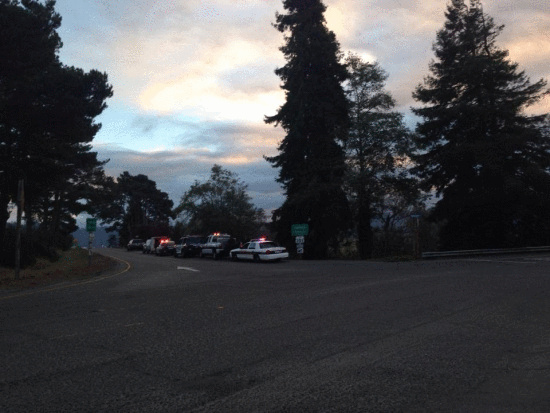 Photo provided of the stop by Kristin Biernacki.

On October 31st, 2013 at approximately 5:00 pm while monsters and superheroes wandered the streets in search of candy, a Fortuna Police Department Officer conducted a traffic stop on a 2010 Silver Toyota truck towing a cargo trailer at Kenmar Road and the Southbound Highway 101 On-ramp. During the stop officers located and seized 17 large black colored plastic bags containing approximately 150 lbs of dried unprocessed Marijuana from the cargo trailer and arrested the driver and sole occupant of the vehicle, Corbett Michael Baird (age 37) of Scotia, California.

Humboldt County Drug Task Force responded and assisted in seizing approximately $2,500.00 in cash that Baird was in possession of. Baird was transported to the Humboldt County Correctional Facility where he was booked on the charge of;