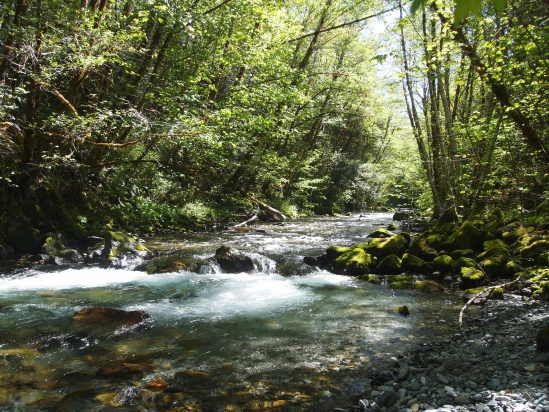 So basically, the Forest Service acquired 160 acres (apparently with oil company money) from the Smith River Alliance, who then handed over another adjacent 160 acres.

Both organizations are pretty excited, since the Smith River, its Siskiyou Fork, and Hurdygurdy Creek are premiere salmon spawning grounds.

From a Six Rivers National Forest press release (see below):

“This stream (Hurdygurdy creek) is a true salmon sanctuary,” said Gasquet Ranger District Fisheries Biologist Mike McCain. He added that one reach within the protected area contained the most Chinook salmon habitat in the entire 2013 Siskiyou Fork survey.

These parcels were heavily logged over 50 years ago, Grant Werschkull of the Smith River Alliance told the Lost Coast Outpost. He emphasized that in addition to fish habitat, the parcels also serve as a wildlife travel corridor for bears, cougars, and other fauna.

The land will stay accessible to the public, but timber harvest, gravel mining, or other resource-extraction will be prohibited in perpetuity, he said.

“It’s incredibly important to protect these large landscape areas from fragmentation, and it’s a good investment so that the public isn’t obligated to fight fires around these little islands of private property.” 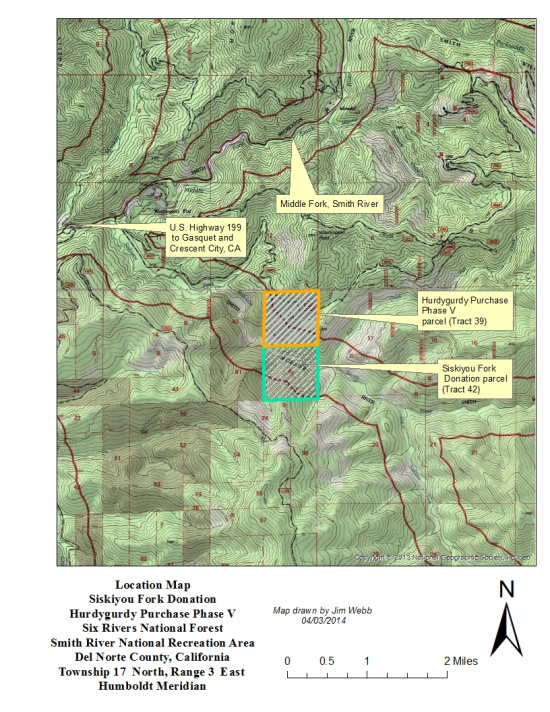 Through the Land and Water Conservation Fund (LWCF), the Forest Service was able to secure funding to purchase one 160-acre parcel – called the Hurdygurdy parcel, from the Smith River Alliance (SRA). The SRA donated the second 160-acre parcel, the Siskiyou Fork area of the Smith River. Established in 1965, the LWCF is funded through federal offshore oil and gas drilling revenues. A portion of these revenues, about $900 million per year, is reinvested through LWCF into conservation and outdoor recreation sites on public lands.

Over the last eight years, the Forest and SRA have worked to obtain LWCF funds to convey 3,705 acres into the Smith River National Recreation Area. The sale and donation are associated with the Hurdygurdy Purchase, where the Forest Service is making phased acquisitions of approximately 5,300 acres for inclusion in the national recreation area.

The SRA retains 1,812 acres of land and will continue to seek additional LWCF appropriations to add the land to the national recreation area. “We’re extremely pleased to have permanently protected the entire property—and to have conveyed the 3,705 acres into the Smith River National Recreation Area,” said Grant Werschkull, Executive Director of the SRA. “We’re also grateful for the partnership of our elected representatives and support of the many state and national agencies and organizations that have worked with us.”

“We’ve been working collaboratively with Smith River Alliance for many years to make this happen,” said Acting Forest Supervisor Mike Minton. “With the efforts of the Alliance and funding from the LWCF, we’ll be able to further protect spawning and rearing habitat for salmon, steelhead and coastal cutthroat trout, which are listed as Forest Service Sensitive Species.”

Hurdygurdy Creek is a significant spawning and rearing tributary for salmon and steelhead and it’s one of the most productive salmon streams in the Smith River National Recreation Area. 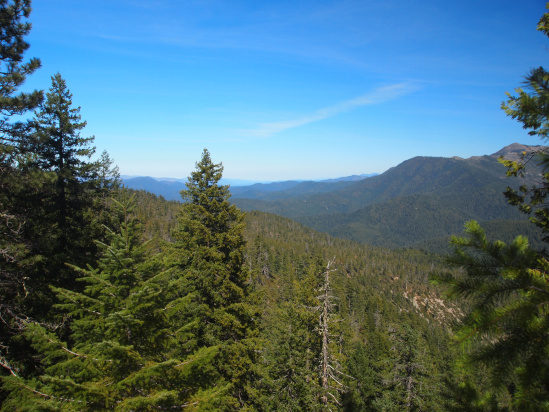 “This stream is a true salmon sanctuary,” said Gasquet Ranger District Fisheries Biologist Mike McCain. He added that one reach within the protected area contained the most Chinook salmon habitat in the entire 2013 Siskiyou Fork survey. “Fish use almost all of the available spawning gravel in this reach and twenty redds—or spawning nests—were observed during the survey,” he said.

Many wildlife species also benefit as the new public lands provide habitat and a travel corridor for species such as black bear and cougar, as well as smaller mammals. The Siskiyou Wilderness is only a few miles upstream and passage through these lands is necessary to reach the lower reaches of the Siskiyou Fork and the Middle Fork.

The project also guarantees public access in perpetuity to the Siskiyou Fork. “This is a win-win for public access and fish and wildlife, said David Palmer, District Ranger for the Gasquet Ranger District/Smith River National Recreation Area. “Here we’re protecting habitat for salmon and wildlife and we’re also making sure the public will always have access to these lands.”

This is a first for the Six Rivers NF, to be able to simultaneously close two land adjustment cases working with the same partner.