Be On the Lookout: Suspect Smashed Car Window Stole Laptop—Photo of Theft »

UPDATE, 4:07 p.m.: Updated below with a press release from Rep. Jared Huffman.

In a series of conference calls today, the federal Bureau of Reclamation has informed stakeholders along the Klamath and Trinity rivers that this year it will abandon its practice of releasing extra Trinity River water in August to prevent a repeat of the 2002 Klamath Fish Kill.

Extreme drought conditions around the state, along with low reservoir levels, mean that there is not enough water in the system to release “preventative” Trinity flows in order to increase and cool water at the mouth of the Klamath, according to Brian Person, area manager for the Bureau of Reclamation’s Northern California Area Office.

Instead, the bureau will monitor river temperatures and fish health at the Klamath’s mouth, where migrating salmonids will soon gather before pressing upstream to spawn. If fish start to get ill, he said, the bureau will release additional cool water into the system in an effort to stop the spread of disease.

“This is looking at the relative risks within the system and being ready to react,” Person told the Outpost.

Local tribes and fishing interests are bound not to be pleased. In the past few years, the bureau has released such water as a matter of course during the period of crisis, when salmon are crammed into the lower Klamath’s shallow mouth. Mike Orcutt, director of the Hoopa Valley Tribe’s fisheries program, told the Outpost that it could take as much as four days or longer for water to travel between Trinity Lake and the mouth of the Klamath — plenty of time for the deadly gill rot disease, which flourishes in high water temperatures, to spread and kill plenty of fish.

Orcutt further maintained that the Bureau of Reclamation has failed to follow the law when it comes to managing the Trinity’s assets. For many months now, he said, the bureau has continued to ship Trinity water into the Central Valley Project for agricultural uses, despite the fact that everyone knew a severe drought was upon us and the law states that environmental protection of the Trinity is the first priority in managing the river’s assets. The water that might otherwise be used to prevent a fish kill, rather than react in case of emergency, has already been shipped away.

There appears to be no time or avenues available for an appeal of the decision, either legally or politically. Of course, the Bureau has continued to refuse to release the annual 50,000 acre-feet of water due to Humboldt County. The system is pretty dry now. If fish start to die this year, there is sure to be a huge, national political firestorm originating out of Requa next month.

“What’s the next step?” Orcutt told the Outpost, when asked. “I don’t know. Frankly, we’re rolling the dice.”

The Secretary of the Interior today rejected calls by Indian Tribes, communities and scientists in the Klamath Basin to release water to protect migrating adult salmon.

Just a week after California officials reported salmon deaths in the Klamath basin, Bureau of Reclamation officials announced that Secretary Jewell has decided to roll the dice. She will continue to divert water to irrigation uses and set aside the senior rights to water under federal and state law for Trinity and Klamath River salmon.

The Hoopa Valley and Yurok Tribes have fisheries on the Klamath River, and its largest tributary the Trinity River. Those rights are protected by federal law and held in trust for the tribes by the United States.

“The Secretary is betting that if fish start dying she can make an emergency release of water to provide relief,” said Mike Orcutt Hoopa Valley Tribe Fisheries Director. He added, “But our scientists say that water wouldn’t reach the fish for 4.5 days and once disease appeared in 2002, up to 70,000 adult salmon were dead within days.”

In prior years, including 2012 and 2013, the Secretary released water to create water conditions for safe migration of salmon.

In 2013 Central Valley Project contractors filed suit to block flow releases. The court rejected their claims, water flowed, and there was no fish kill.

This year, however, the Secretary abandoned this science-based, field-tested flow release fish protection measure that is widely recognized as prudent and necessary.

“It is as if the Secretary of Transportation said let’s forget about automobile seat belts, airbags and antilock brakes and spend the savings on ambulances,” said Hoopa Valley Tribe Chair Danielle Vigil Masten. She added, “The problem is that the ambulance may or may not get to a crash scene in time, and when it does arrive, the crew will have to deal with far more serious injuries.”

Council Member Ryan Jackson said, “We have made numerous trips to Washington, D.C. and Sacramento visiting with Congressmen, Senators, Interior Department officials, White House representatives and countless staff. We are extremely disappointed in the wide gulf between the Administration’s statements professing commitment to Indian trust responsibility and respect for Indian Tribes, and the federal actions that are taking our trust resources to the brink of destruction. That is no way for a trustee to act.”

“The law of the Trinity River has been set aside by the Secretary’s decision; in its place she has put the risk of catastrophe entirely on us and Trinity Basin communities, in order to cater to politically favored interests,” said Masten.

Press release from the office of Congressman Jared Huffman:

WASHINGTON­—Congressman Jared Huffman (D-San Rafael) released the following statement after the U.S. Bureau of Reclamation announced its decision today to withhold water releases on the Trinity River needed to prevent a repeat of the 2002 Klamath fish kill:

“The U.S. Bureau of Reclamation’s decision today to withhold water releases needed to prevent a repeat of the 2002 fish kill in the Lower Klamath River is the latest example of how the federal government fails to plan for drought to the detriment of tribes, fishermen, and the environment.

“Even now, Reclamation continues to divert Trinity River water to the mismanaged Sacramento River system and has drained Trinity Reservoir so there is virtually no available water to protect salmon in the Trinity or Klamath rivers. By state law, Trinity River salmon – which begin their upstream migration in the Klamath River – must be protected before water is used to bail out the Central Valley Project. When you find yourself in a hole, you’re supposed to stop digging, but Reclamation has dug itself a hole it cannot get out of, and tribes and fishermen may once again pay the price.”

Prior to today’s announcement, Huffman had sent a letter calling on the Bureau to immediately address the increasingly hazardous conditions for salmon and steelhead trout in the Klamath and Trinity River watersheds during this drought year. 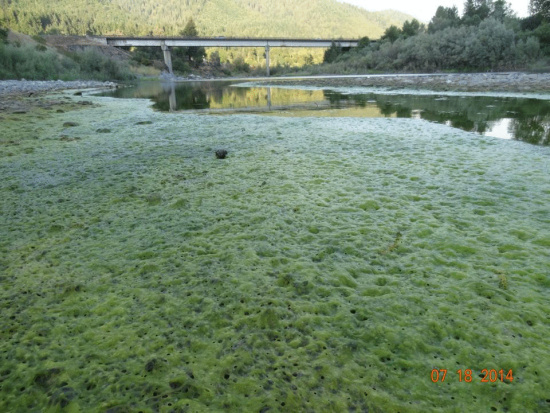