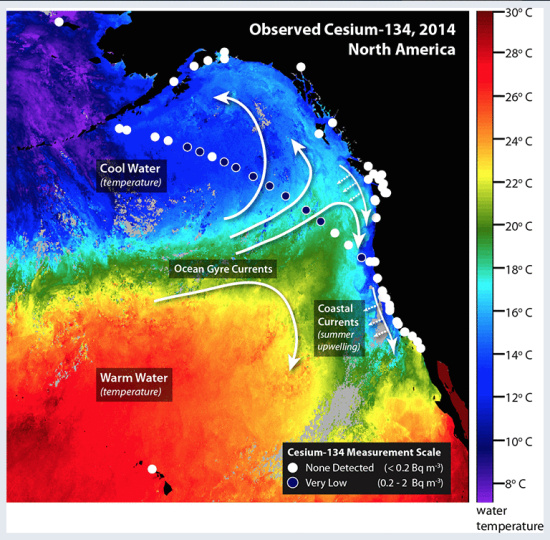 No cesium-134 has yet been detected along the coast, but low levels have been detected offshore. By Woods Hole Oceanographic Institution.

WHOI chemist Ken Buesseler will be responding to questions from the public on the “Ask Me Anything” forum on Reddit at 10 a.m. PST on Nov. 10.

Monitoring efforts along the Pacific Coast of the U.S. and Canada have detected the presence of small amounts of radioactivity from the 2011 Fukushima Dai-ichi Nuclear Power Plant accident 100 miles (150 km) due west of Eureka, California. Scientists at the Woods Hole Oceanographic Institution (WHOI) found the trace amounts of telltale radioactive compounds as part of their ongoing monitoring of natural and human sources of radioactivity in the ocean.

In the aftermath of the 2011 tsunami off Japan, the Fukushima Dai-ichi Nuclear Power Plant released cesium-134 and other radioactive elements into the ocean at unprecedented levels. Since then, the radioactive plume has traveled west across the Pacific, propelled largely by ocean currents and being diluted along the way. At their highest near the damaged nuclear power plant in 2011, radioactivity levels peaked at more than 10 million times the levels recently detected near North America.

“We detected cesium-134, a contaminant from Fukushima, off the northern California coast. The levels are only detectable by sophisticated equipment able to discern minute quantities of radioactivity,” said Ken Buesseler, a WHOI marine chemist, who is leading the monitoring effort. “Most people don’t realize that there was already cesium in Pacific waters prior to Fukushima, but only the cesium-137 isotope.  Cesium-137 undergoes radioactive decay with a 30-year half-life and was introduced to the environment during atmospheric weapons testing in the 1950s and ‘60s.  Along with cesium-137, we detected cesium-134 – which also does not occur naturally in the environment and has a half-life of just two years. Therefore the only source of this cesium-134 in the Pacific today is from Fukushima.”

The amount of cesium-134 reported in these new offshore data is less than 2 Becquerels per cubic meter (the number of decay events per second per 260 gallons of water). This Fukushima-derived cesium is far below where one might expect any measurable risk to human health or marine life, according to international health agencies. And it is more than 1000 times lower than acceptable limits in drinking water set by US EPA.