Your Week in Ocean: So Many Ways to Step Into Liquid » 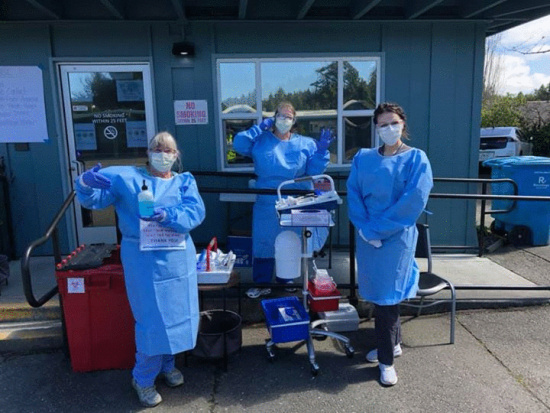 Here’s a test of a post. I’m going to include a photo and an audio file.

Update from the Secretary of State’s Office as of right now. The statewide propositions on the ballot should particularly upset Humboldt County residents for a couple of reasons: Proposition 48, which would have cut the Wiyot Tribe in on a big casino elsewhere on the state is losing, and the governor’s water bond — Prop. 1 — is winning, which could spell bad news for the Trinity River. 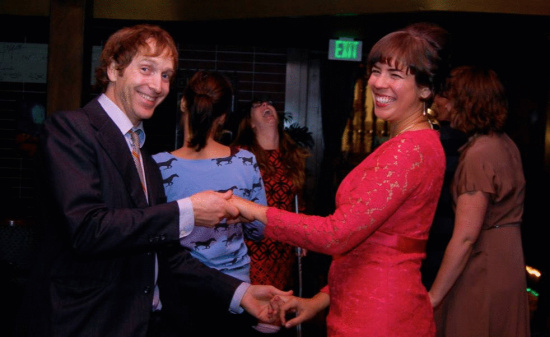 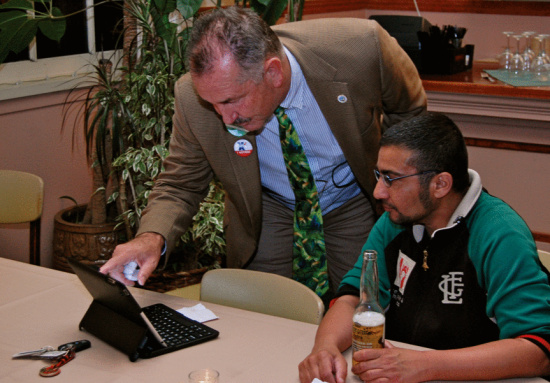 The party was pretty hopping at the Sea Grill about 20 minutes ago, despite the mixed results for revelers there. Mike Newman, with a strong lead in the absentee returns, told the Outpost that he was “guardedly optimistic.” Chet Albin seemed less sure, and rushed to praise his opponent, Natalie Arroyo — a “nice young gal” who ran a “clean campaign.”

Albin said that he’d been out doorwalking up until the bitter end of the election season, so perhaps GOTV could swing this thing around for him. “We’ll see what happens,” he said. 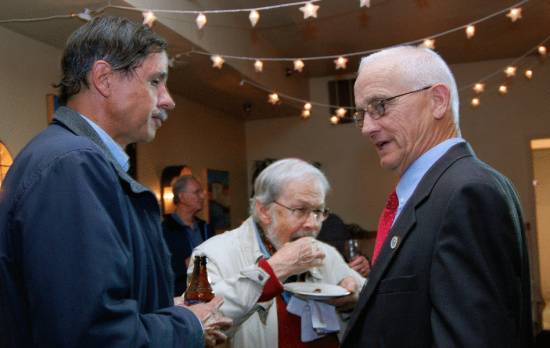 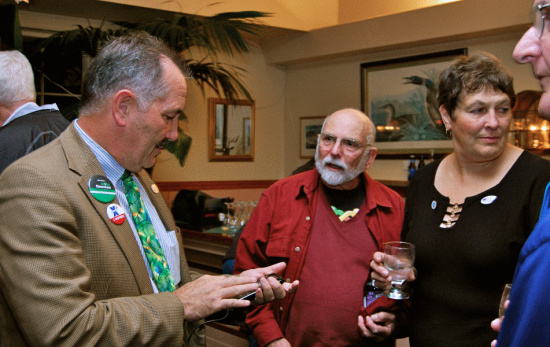 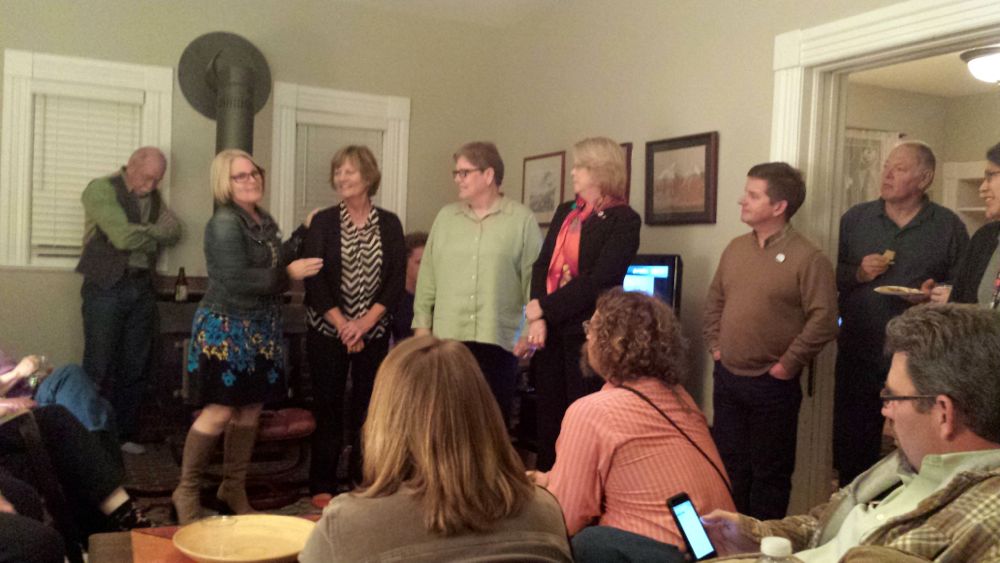 While still waiting for the second report from the Elections Office, Bergel gathered the key members of her campaign team, including Ciarabellini, Atkins and former Eureka City Councilmember Jeff Leonard. Standing in front of a roaring stove she thanked them one by one. Atkins, she said, “started this whole thing” while Leonard “inspired me.”

“No matter what happens,” she said, “we worked really hard. … And I feel really supported. 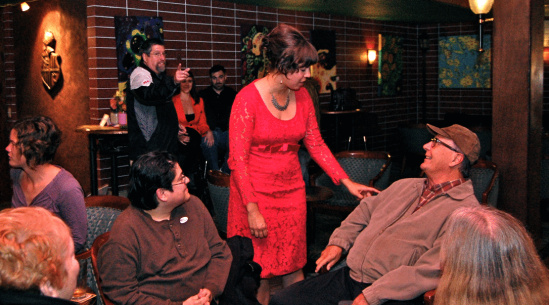 First results are in! Candidate Natalie Arroyo approached this LoCO correspondent’s laptop hoping for an update and was pleased to discover she led opponent Chet Albin by a 55%/43% margin.

“I feel great,” Arroyo noted when asked for a reaction to the positive numbers, but quickly reconsidered her overuse of that word. “I’ve gotta quit saying that. I need a new word.”

She thought a moment: “I feel … ’splendiferous’.” 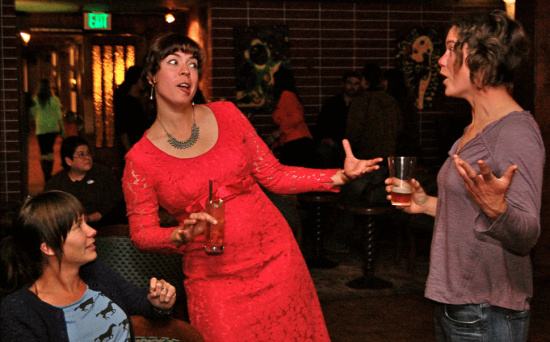 “So you’re not worried?” this reporter asked.

Meanwhile, conversations around the food table range from the apparent Republican takeover of the U.S. Senate majority and — we kid you not — a supernova, upon which a rocket scientist and HSU professor is holding forth.

As Bergel munches on what appears to be a jalapeño popper she tells a concerned supporter, “You know what? I worked as hard as I could.” 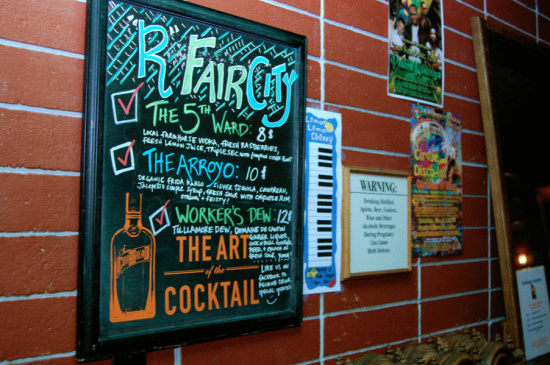 LoCO has landed at its first Election Night party, namely Natalie Arroyo’s soiree at The Palm Lounge. Much like Chris Kerrigan’s June campaign shindig, the bartenders here have cooked up a special drink menu for the evening. Cocktails include: 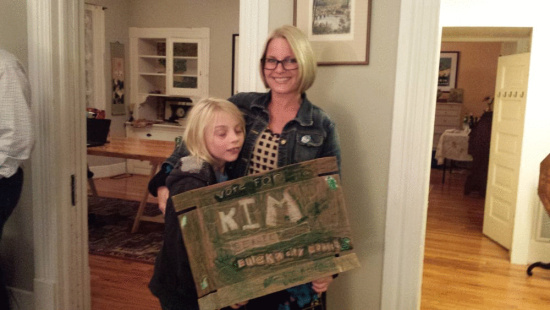 Bergel poses with her son Asher and the campaign sign he made.

“How you feelin’?” Ciarabellini asked Bergel a few minutes ago.

Bergel told the Outpost that she’s worked really hard, knocking on roughly 5,000 doors in the city since July.

“It’s been a great experience,” she said. “I’ve loved meeting people, and I’ve even been able to help a few.”

As for her prospects, Bergel said she’s staying away from predictions.

It’s about 20 minutes until the polls close, maybe half an hour until the first election report is published. Here are the things that we’ll be looking for tonight.

EUREKA CITY COUNCIL: There is a strong premonition out there that the left will take at least one seat from the conservative faction that has controlled the Eureka City Council for quite a few years, now. See, for example, Richard Marks’ predictions — he picks challenger Natalie Arroyo to knock off appointed incumbent Chet Albin, and that does seem the most likely scenario to us, if the left does pick up a seat. However, there’s an outside chance that Kim Bergel could surprise incumbent Mike Newman also, or instead. Any left-of-center victory would be enormously heartening to Eureka liberals, who have become grimly accustomed to defeat.

If the first results — those generally cast by right-of-center absentee voters — show Arroyo and/or Bergel ahead, things are not looking good at all for their respective opponents. One would be tempted to call the race over. The Outpost will be making the rounds of Eureka election parties, and we’ll be reporting live.

MEASURE P: Anything less than a decisive victory for the GMO ban would be a shocker.

MEASURE R: Wild card! Hand it to Verbena and James Decker — they’ve run a pretty great campaign in favor of the Eureka $12/hour minimum wage, all things considered. A lot of money has poured into this late from the other side, though, and the generally conservative Eureka electorate may have been mobilized. If R wins, Verbena is this Humboldt County election cycle’s MVP, horrifying as that may seem.

ARCATA CITY COUNCIL: Estabilshment candidates Mark Wheetley and Sofia Pereira are the strong odds-on favorites for the four-year seat … but has Juan Fernandez rallied the not-inconsiderable Freak Power vote enough to topple one of them? Unlikely, but let’s see. Paul Pitino should win the two-year seat walking away.

MEASURE Q, MEASURE Z, VARIOUS OTHER MUNICIPAL SALES TAX MEASURES and MEASURE S, MEASURE X, AND VARIOUS OTHER SCHOOL BOND MEASURES: My sense is that the general public is in no mood to be taxed any further, nor to take out further bonds, but Measure Q — Eureka’s half-cent sales tax continuation — has run pretty hard. My sense is that most or all of these fail. Remember: The school bond measures need 55 percent to pass.

OK, see you in a few! The Lost Coast Outpost staff and its various robotic helpers will be updating this post continuously all night. You will get it here first.

As always, your Lost Coast Outpost will be the first and easiest place to find local election results as they roll in tonight after the polls close at 8 p.m. LoCO correspondents will be out on the town hitting up election parties, gabbing it up with politicos, snapping blurry, lowlight photos and resisting vegetable trays.

Of course, today is that last chance to rally the populace. Early this morning, we spotted Eureka City Council candidate Natalie Arroyo rocking a sign in front of the courthouse in close proximity to megaphone-equipped Measure R advocate James Decker (pictured above). Also, watch the pair of videos below to see how candidates Kim Bergel, Mike Newman and Chet Albin attempted to raise last-minute excitement for their campaigns.

Check back throughout the day for more election day updates. We’re going to assume that since you’re a LoCO reader, you’re plugged into your community and that you’ve already voted, but if you’ve failed to do so and need help knowing if you’re registered or finding your polling place, click here.