Press release from the Yes on P campaign: 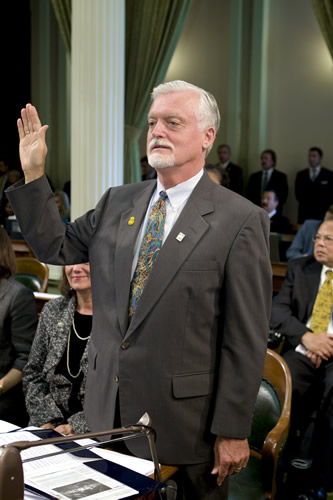 “I am voting in favor of Measure P because it will send a message that Humboldt County, along with our neighbors in Mendocino and Trinity counties, is committed to sustainable agriculture and we are opposed to uncontrolled, unregulated release of GMO organisms into our environment,” Chesbro said.

In the Legislature this year Chesbro authored successful legislation that protects California’s wild salmon fisheries by banning the commercial production of genetically modified salmon throughout the state. The bill, AB 504, was signed by the governor last month and becomes law Jan. 1.

“GMOs are not compatible with our North Coast commitment to restoring and using our natural resources in a sustainable way,” Chesbro said.

If Measure P is approved, Humboldt County will join neighboring Mendocino and Trinity Counties in prohibiting the cultivation of genetically engineered crops, often called GMOs. Coming on the heels of similar actions by the Yurok Tribe and the Sierra Club, Chesbro’s endorsement shows broad and growing support for Measure P as election day approaches.

“Measure P is about promoting our local agricultural economy and protecting our local environment,” said Bill Schaser, spokesperson for the Measure P campaign. “Forward-thinking elected officials know that this measure will be good for the future of Humboldt County, and we’re happy that many of them have publicly stepped up to support it.” Other elected officials who have endorsed Measure P include Trinidad Mayor Julie Fulkerson, Arcata City Councilmembers Susan Ornelas and Michael Winkler, McKinleyville Community Services District Director George Wheeler, and Third District Supervisor Mark Lovelace. A number of current candidates for local office have also expressed their support in recent statements and interviews.

GMOs are produced by manipulating DNA in a laboratory to overcome natural reproductive barriers. The resulting organisms contain genetic codes which could not have been created through natural processes. The most widespread GMOs today are crop plants engineered to resist the effects of certain herbicides or to produce their own insecticides.