We Live in Heaven: A Time-lapse Video »

One day after the People’s Climate March grabbed headlines by filling the streets of New York with marching activists, a smaller crew looked to keep that climate change protest momentum flowin’ by conducting a sit-in on the steps of the New York Stock Exchange. Dubbed “Flood Wall Street,” the Occupy-ish group aimed to confront “the system that both causes and profits from the crisis that is threatening humanity” by jacking up the people-flow of NYC’s financial district.

Great times, for sure. But we mention #FloodWallStreet here on the #LostCoastOutpost to bring attention to the delegate most of us Humboldters didn’t even know we were sending: a justice-minded, sign-wielding, take-no-shit polar bear.

Happy & carnival-like here. Yet we are deadly serious about change. #FloodWallStreet pic.twitter.com/7zeBkBmiZ2 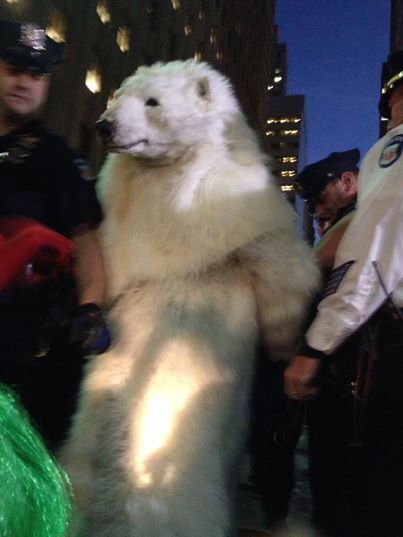 Who was beneath the fur? The man the Washington Post dubbed “an overnight social media phenomenon” was none other than environmentalist and Shelter Cove resident Peter Galvin, co-founder and director of the Center for Biological Diversity. In addition to drawing attention to climate change Monday, Galvin’s furry turn was quite the hit on Twitter. Who wouldn’t want to grab a shot of the largest living species of terrestrial predator roaming Broadway, after all?

Our local polar bear’s rabble rouser status was further solidified Monday night. At a certain point, police had had enough and ordered the crowd to vamoose. They did not. In the end, around 100 protesters were arrested and our fuzzy friend submitted to having his paws cuffed behind his back (see below).

Hear chants to “Save the Polar Bear!” in the clip below.

The Guardian reports the bear made bail and was released from human jail around 2 a.m. this morning (see below).

No word yet on how bearable his stay behind bars was.