Humboldt State Putting Up Tired Firefighters in the Dorms »

UPDATE, MONDAY MORNING: Carol Grimes, operations manager for the Arcata Unified School District, tells the Outpost this morning that she had been on vacation for the last couple of weeks, and so had missed news of the new watering restrictions.

It will not happen again, Grimes says. 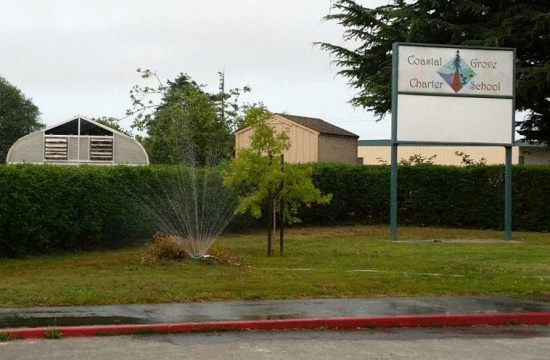 LoCO reader William Ross today sent us this photo of a sprinkler doing its sprinkler thing in front of Arcata’s Coastal Grove Charter School. Ross reported that the sprinkler was running from 7 a.m. to 3 p.m. yesterday, in violation of Arcata’s recently enacted Mandatory Water Conservation Measures.

No. 4 on that new list of rules forbids “[t]he application of potable water to outdoor landscapes and turf between the hours of 10 a.m and 6 p.m.”

And look at how wet that sidewalk is! Rule No. 1 forbids “[t]he application of potable water to outdoor landscapes in a manner that causes runoff such that water flows onto adjacent property, non-irrigated areas, private and public walkways, roadways, parking lots, or structures.”

Ross, who is a neighbor of the public school, said he moved the sprinkler after taking this photo so it wasn’t watering concrete. But it did all day yesterday, he said. “It’s already been on for 4 hours today,” Ross reported shortly after 11 a.m.

We put a call in to Coastal Grove but no one answered, and there’s a good chance nobody’s there, this being the summer and all. So we called the Arcata Elementary School District and were told that the Director of Maintenance and Operations would call us back. Nothing yet, though.

At 11:25 a.m. Roth messaged us again: “It looks like the guy’s here to turn them off. The cops were down here looking at it this morning. I think they may have called them.”

But alas, five minutes later Roth provided an update. “No, it looks like he just moved them [the sprinklers] over to a different spot. … Yeah he just drove off so he’s not turning them off.”

Per the Governor’s decree Arcata must reduce its per capita, per-day residential water use by eight percent for each month, compared to the same month in 2013. The City may need some volunteers to forgo showers this month.