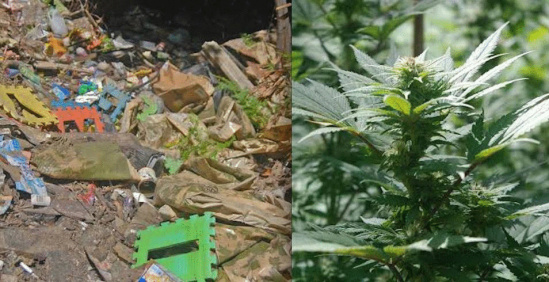 What follows is not your typical press release. The official statement from the Yurok Tribe dispenses with the clinical detachment usually seen in law enforcement releases, instead lambasting “greedy growers looking to make a quick buck.” Describing deforestation, illegal buildings and mass amounts of waste, the statement says, “The industrial-scale grows resemble mountaintop coal mining [more] than any type of agriculture.”

An early morning raid Monday marked the beginning of an aggressive effort, led by the Yurok Tribe, the California National Guard Counterdrug Unit and the Humboldt County Sheriff’s Office, to eradicate dozens of environmentally destructive marijuana farms from the Yurok Reservation and adjacent lands.

“The illegal plantations that we are targeting pose a severe threat to our natural resources, our water and our way of life,” said Susan Masten Vice Chairperson of the Yurok Tribe. “It breaks my heart to see these 10,000 plant grows sucking our watersheds dry, while our community is on the brink of running out of water. It is unacceptable and it is immoral.”

Monday’s operation removed multiple illegal marijuana crops, including one that an environmental scientist at the scene described as an “environmental disaster.” Dozens of abandoned vehicles, 20-plus broken car batteries and several cubic yards of household waste were strewn across the grow site and nearby ravine. Numerous tires, refrigerators and piles of grow-related garbage were also found on the property, which had recently been illegally graded to cover up some of the toxic debris. The collaborative effort will continue into next week.

The unlawful pot plantations are diverting untold millions of gallons of water from the creeks that feed the Tribe’s community water systems, which are barely producing enough to satisfy the basic needs of 300-plus families on the east side of the reservation. The illegal diversions are also impacting crucial cold streams that are critical for fish health. Currently, the temperature of the Klamath River is nearly 75 degrees, a significant threat to the salmon starting to migrate upriver to spawn. High numbers of the anadromous fish are already holding at the creek mouths, where it is up to 20 degrees cooler, to regulate their body temperatures. In times of drought, these fish could not survive without these cold water refuges.

Operation Yurok is a collaboration between Tribal, federal and state law enforcement, including: California National Guard Counterdrug Unit, Bureau of Indian Affairs, CA Fish and Wildlife, Water Quality Control Board and others. The collaborative effort was initiated after the Yurok Tribe reached out to California Governor Jerry Brown for assistance. Governor Brown responded by sending members of the state’s National Guard to aid in reining in the enormous environmental impact and massive water theft uncovered during a lengthy investigation into dozens of industrial-size marijuana plantations. Prior to the main operation, Tribal and County law enforcement took down a large grow, containing more than 10,000 plants.

“These pot farms are the largest that we’ve ever seen in the Tribe’s ancestral territory,” said Yurok Public Safety Chief Leonard Masten. “We are going to file charges for every environmental crime and hold accountable the individuals responsible for damaging the Tribe’s sacred resources.”

In the past five years, a deluge of clandestine cannabis growers from all over the United States have moved to lands within and adjacent to the Yurok Reservation. The combination of the mountainous terrain and minimally funded law enforcement has made it a desirable destination for greedy growers looking to make a quick buck. The migration is eerily similar to what happened to the Tribe in 1849, when men throughout the U.S. flocked to Northern California in search of a shiny, yellow metal.

“First, our Tribe was hit by the Gold Rush and then it was unregulated, clear-cut logging,” Vice Chairperson Masten said. “The Green Rush threatens to destroy what is left of our forests and rivers.”

Last year, a coalition, comprised of many of the same law enforcement agencies, conducted a similar operation and found horrifying abuses to the environment, such as grading in sensitive riparian areas, illegal dumping of petroleum products and the depositing of waist-high piles of human excrement near waterways. At one grow site on the south side of Bald Hills Road, a four-inch pipe and a massive generator were used to divert every last drop of a cold creek to a large plantation. At another location, east of Weitchpec, a group of growers deforested an entire mountaintop to grow 5,000 plants. They used some of the logs to build a two-story shanty and the rest of the timber to construct giant barricades around the property.

The industrial-scale grows resemble mountaintop coal mining [more] than any type of agriculture. These deep scars on the ecological landscape are challenging and extremely expensive to remediate. At one site, cleaned up by the Yurok Tribe and the California National Guard, it cost $30,000 to remove tons of trash, dismantle the hundreds of yards of hose and properly dispose of hazardous chemicals.

Last year’s collaborative effort netted more than 15,000 pot plants. It is estimated that it takes three to six gallons of water per day to grow one marijuana plant. The crop would have conservatively wasted 5 million gallons of water meant for the community, as well as fish and wildlife. What is not taken into consideration are leaks in the miles of plastic pipe used to move water from a spring or creek to the growing operation, a common feature at the 43 sites visited last year. Officers witness water trickling out of pipes onto the ground at almost every plantation.

This year, Operation Yurok is expected to eradicate at least three times as many crops.

“We are trying to send a loud message that illegal pot growers are not welcome on Tribal lands. Operation Yurok will continue until we stop the theft of our water and egregious environmental destruction,” concluded Vice Chairperson Masten.

The Yurok Tribe is largest federally recognized Tribe in California. The natural resource-based Tribe is best known for the implementation of leading-edge watershed restoration projects, language preservation program and cultural protection effort. The Tribe is a Zero Tolerance Ordinance, making all illicit drugs illegal on the Reservation.