Eureka Police Chief Lays Out Events Leading to the Barrage of Bullets in Dec. 6 Officer-Involved Shooting; Admits to ‘Some Concerns’ About Police Response 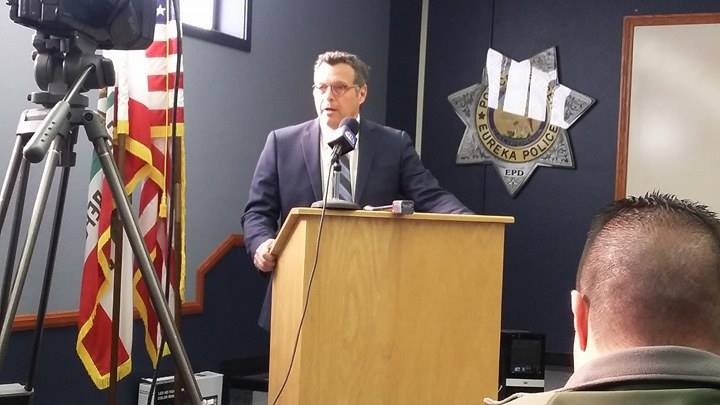 Eureka Police Chief Andy Mills told reporters this morning that he has “some concerns” about the way his officers responded on the evening of Dec. 6, when they fired over 40 rounds just before 5 p.m. in downtown Eureka in an effort to stop an armed suspect who had attempted to flee arrest.

Mills said that two eyewitnesses to the incident reported seeing 26-year-old Clayton Lee Lasinski — who was struck with one round and wounded before being taken into custody — level his handgun at pursuing officers near the end of the chase. (It was later determined that Lasinski never fired his weapon.) But Mills said that the internal investigation into the incident had raised, in his mind, anyway, some initial questions about whether proper police procedures were followed.

At a press conference at Eureka Police Department headquarters that was convened in part to combat some “inaccurate information” that had appeared in local media, Mills said that that there would be a full, transparent review of the case, which would involve not only an internal affairs “shooting review board” investigation, but an examination of the incident by his civilian Chief’s Advisory Panel.

Still, while Mills said that the decisions of police, especially those that involve the use of deadly force, must be “legally and morally justified,” he noted the burden of the expectations that his department and the public place on its officers.

“We ask our young men and women to make decisions in microseconds, and we expect them to be right 100 percent of the time,” Mills said. “We ask them to make these decisions while running, with 30 pounds of gear on.”

Three of the four officers who fired their weapons that day are set to return to duty tomorrow, Mills said. The other — Ofc. Abraham Jansen — had been on a prescheduled vacation, and has not yet debriefed with a police psychologist as the others have.

Mills said that investigation of police actions during the incident will continue, and he outlined the next steps the department will take to review the action. There are more interviews that need to be conducted, including with the officers involved. Investigators are awaiting forensic evidence reports from the state Department of Justice.

In the meanwhile, Mills released some new information obtained during the interview with the suspect in the case. He said Lasinski told investigators that when he ran from a traffic stop by a California Highway Patrol officer — the incident that triggered the roughly 18-minute sequence of events that included the theft of a vehicle, the attempted carjacking of another, and the volleys of shots that finally brought the chase to a close — he had thought that the CHP officer was doing the bidding of an “organized crime figure” from Modesto to whom he owed money.

Mills said that Lasinski apologized to police for his actions.

In a PowerPoint presentation offered to reporters, Mills laid out a timeline of events that ran from 4:39 p.m. — the moment the CHP traffic stop was initiated — to 4:57 p.m., when Lasinski, gravely wounded, was taken into custody on Fifth Street.

Lasinski, after apparently attempting to ditch the CHP officer, parked in the lot of the Best Western Inn at the corner of Fourth and Commercial. From there, he fled on foot, threatening two of the motel’s employees with the handgun he carried before scaling a wall and landing in the streets of Eureka. Eureka police officers were brought in to try to track down the suspect and detain him.

Moments later, Ofc. Steven Linfoot spotted Lasinksi near the intersection of California and A streets, and pursued him toward the Sole Savers auto dealership on Sixth, where he hopped into the passenger side of an idling car and climbed across into the driver’s seat, to speed away. Linfoot told investigators that Lasinski pointed his handgun at him through the dashboard. Linfoot opened fire as Lasinksi drove away. Linfoot fired 16 rounds at the vehicle as Lasinksi stepped on the gas and passed him by. Mills told reporters that Lasinski would later tell investigators that this is when he was struck by gunfire.

As he drove out of the lot, he came upon Ofc. Dustin Nantz, who told investigators that Lasinski appeared to be aiming the vehicle at him. Nantz fired five rounds at the car. He then passed by Ofc. Jansen, who fired 15 rounds at the car as it drove past and away from him.

Later in the press conference, Mills would indicate that it was this stage of the incident that presented concerns, to his mind. He said that investigators would probe the officers further as to why they fired at the vehicle after it had passed them by.

The stolen vehicle stalled just outside the police station, near the intersection of Sixth and B streets, Mills said. Lasinski ditched the car and tried to carjack another from a passing driver. That driver stepped on the gas and fled, while Detective Ron Harpham arrived at the scene. He fired one shot at Lasinski before he fled down B Street, with police in pursuit. Ofc. Jansen fired two shots at the suspect as he ran down B Street, and another three as he cut across the parking lot of the Hertz Rent-a-Car lot at the corner of Fifth and B.

Two witnesses saw Lasinski point his handgun at officers as he ran across the Hertz lot, according to Mills. Apart from the testimony of the officers involved, this is the only independent evidence supporting the charge that the suspect threatened police with his weapon. No video surveillance was available at the Sole Savers lot where shots were first fired, and of the officers on the scene only Nantz’s body camera was functional. (Linfoot had just come on shift and did not have time to activate his body cam when the call arrived at the Eureka Police Department, Mills said.)

Lasinski continued on to Fifth Street and slumped down against a car, where he was taken into custody. His weapon — a .45 caliber handgun — was loaded and the hammer was pulled back, but it had not been fired, Mills said. There was no bullet in the chamber, and Mills said he believes that the only thing that stopped Lasinski from firing on officers was operator or mechanical error.

At least some of the officers involved believed that they were being fired upon, Mills said. One officer said that he heard two different types of gunshot as the chase was underway. Mills speculated that this was likely due to the acoustics of gunshots in the city streets, with the echoes of the identical police-issued handguns bouncing off walls, changing the sound.

In total, Mills said, 42 rounds were fired. Twenty-seven bulletholes were found in the car stolen from Sole Savers, and two of them were likely “exit” holes. Fourteen bullets hit walls and other nearby objects, including a parked truck. It’s not known where the other three bullets ended up.

The EPD has launched a new “transparency portal” on its website, Mills said. Further documents and updates concerning this incident will be posted there. Also, Mills said that it will be posting material relating to the Tommy McClain case — the only other EPD officer-involved shooting in the last six years — to the site later today.

Mills said that the EPD will also post a video relating to the case of former EPD Sgt. Adam Laird, who left the department following an internal affairs investigation relating to the excessive use of force. The video depicting Laird’s use of force in the arrest of a juvenile was the subject of a lawsuit brought by the North Coast Journal, which successfully argued for its release.