HARDIN: What’s a Picture Worth? 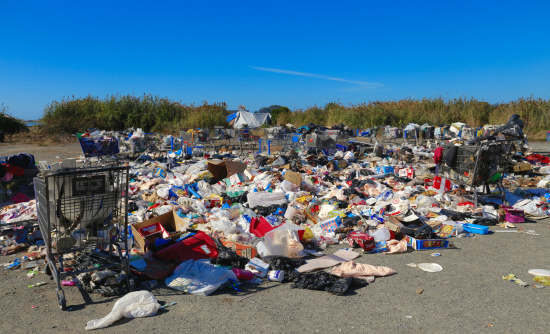 I noticed this image most recently in the North Coast Journal, but I’ve seen it, in one variation or another, in most of our local media outlets: Pretty much anytime the cops evict people from an “illegal” encampment, the press report appears beneath, or at least includes, a picture of a trash-strewn field. We treat human beings like garbage. We force them into impossible conditions, harass them, abuse them, and then forcibly evict them. Then we show the picture of the trash-strewn field, as though the purpose of the whole cruel, violent, unconscionable operation were to clean-up litter.

That picture is enough to incapacitate most liberals, whose feeble minds freeze at the sight of it, caught in the cognitive dissonance between wanting to help the poor and wanting to protect the environment. Liberals like to think that they are smarter than gun-toting, bible-thumping, immigrant-bashing red-neck conservatives, but they’re not, not by a long shot, and liberals fall for this stupidity every time.

Liberals watch well-fed, well-equipped and well-armed police officers forcibly evict the most wretched of the wretched from the most squalid of squalid, and treat them as though their condition amounted to criminal behavior, and the cops say “See, it’s not about the violent oppression of local citizens; it’s about cleaning up the environment.”

Liberals hear that and think, “Look at all that litter. That’s a real problem. I hate litterbugs.”

In truth, it’s worse than that. It’s about economic pressures forcing all of us into impossible situations. It’s about watching our neighbors crumble under the stress and then stepping around them, and avoiding their gaze. It’s about looking around, and wondering “How did it come to this?”

We used to have a guy down here in SoHum who loved to to take pictures of garbage and human feces. He often visited the makeshift encampments in SoHum to take pictures, and he eagerly showed his photos to anyone who would look. More than once, I overheard this conversation, as he grimly showed someone a picture on his phone. “How do you know that didn’t come out of a dog?” the person looking at the picture would invariably ask.

“I know! You can tell. Look at that.” the guy would say, flipping to another picture, and then showing it to the person, adding, “Have you ever seen that much of anything come out of a dog.”

“Ewww” the person would say.

He mounted some of the pictures on poster-board and brought them to town meetings, and he regularly called our community radio station to tell us, angrily, always angrily, that those people living down on the river bar were ruining our community.

To be fair, the guy did clean up a hell of a lot of garbage, and he did pay a some of the people living in these encampments to fill bags with garbage and clean up the area. I know he cleaned-up a lot of trash, because he would leave impressively large piles of it along Redwood Drive between Redway and Garberville. He used these massive pyramids of garbage as fundraising tools, to solicit donations from passing motorists. A lot of people supported this man’s efforts with cash donations, even though he offered no accounting of how much money he raised, or how he spent it.

I cheered when he moved out of the area. He rubbed me the wrong way for three reasons: 1. He was always angry. 2. He blamed poor people. 3. His wife sold real estate, and he had a contract to clean up foreclosed-on houses after the housing bubble burst. In other words, he and his wife, made money by making people homeless. Still, I felt sorry for him, in a way.

I could see that the guy was genuinely upset. He wasn’t happy. He looked like his head was about to explode. You could tell that it was more than he could take. He could not fathom the depth of the problem, and it all came out as displaced aggression. I can relate. It’s fucking brutal out there, and we’re all in over our heads. We’re all looking for someone to blame.

Democrats blame Republicans. Republicans blame immigrants, Muslims, women, liberals, the media, “welfare queens,” the poor, and anyone else they find, and all of those people blame the government. We all know it isn’t working, but we all blame different people for it. Our problems are much bigger than these petty quarrels. Much, much bigger.

For instance, when it comes to housing, we have two choices:

Between those two ridiculous options, we have nothing. We know from statistics that most people who live in Humboldt County cannot afford a home here. Either they spend more than they can afford on housing, skimping on necessities like food, medicine and utilities, while they work themselves to death, or they find themselves without housing and learn to survive that way.

They’re both shitty options, and I wouldn’t even call it a choice. More like, you try Option 1. You give it your best shot. If things don’t go well, you discover Option 2. Meanwhile, if you listen to the County Supes, the Eureka City Council and their special consultant on homelessness for long, you realize that government will never solve this problem. In fact, the government exists specifically to create this problem, which is why there are cops out there evicting people from their squalid makeshift camps in the first place.

A hundred years ago, we built innovative new technologies that allowed us to exploit the Earth’s resources more efficiently. We built new mining equipment culminating in the giant drag-lines used in mountaintop removal coal mine operations. We developed new oil technologies, leading to innovations like the Deep Water Horizon deep sea oil drilling platform, and the latest craze sweeping the nation, “Fracking.” Inventions like the chainsaw literally changed the face of the Earth. Today, we see the disastrous consequences of the enormous success of these technologies all around us.

Right now, technology revolves around exploiting you, the user. How are they doing on that? Do you think there’s still room for improvement? Is there anything left of you? I wonder. No, technology won’t save you. There’s no “app” for that. We inhabit a culture that has run out of options. No one, sees any realistic hope that things will get better, and it only goes downhill from here. That’s the story.

When you see cops intimidating, harassing and evicting people who have nothing, and nowhere to go, you are looking at the end of civilization. You are watching the interests of capital crush your neighbor’s last refuge and pitch it into a dumpster. That picture shows the brutality of the system, and that’s the picture that tells the story.

When you see that debris-strewn field, it means they missed the story completely. It’s like they went to cover the Superbowl, but the only picture we see is the empty stadium, strewn with beer cups and fast-food wrappers. Unless they wanted to remind us that sports fans are a bunch of drunken slobs, which is true of most of us, by the way, they missed the story.