It’s going to be a week of much popcorn nomming for American political junkies. After enduring last week’s Republican National Convention in Cleveland, the spotlight shifts to Philadelphia for the Democratic National Convention, an event already off to a rocky start with yesterday’s announcement that DNC Chairperson Debbie Wasserman Schultz would be stepping down after Wikileaks published 20,000 unflattering DNC emails — see her being booed into oblivion this morning, here. Who’s ready to party?!

A little over a week ago, LoCO readers will recall a rally in Eureka in front of Congressman Jared Huffman’s office in which we spoke with Bernie-supporting local delegate at large Robert Shearer who was gearing up for his convention trip to the City of Brotherly Love.

Did our man make it? Oh, yes! And he even got to spread the Bernie movement gospel on CNN. Watch below.

When we spoke with Shearer at the rally in Eureka he informed us that he would be streaming live video from the floor of the convention on his Facebook page.

Over the weekend, Shearer sent the Outpost a statement which sheds a little light on how he will be expending his energies in Philadelphia. 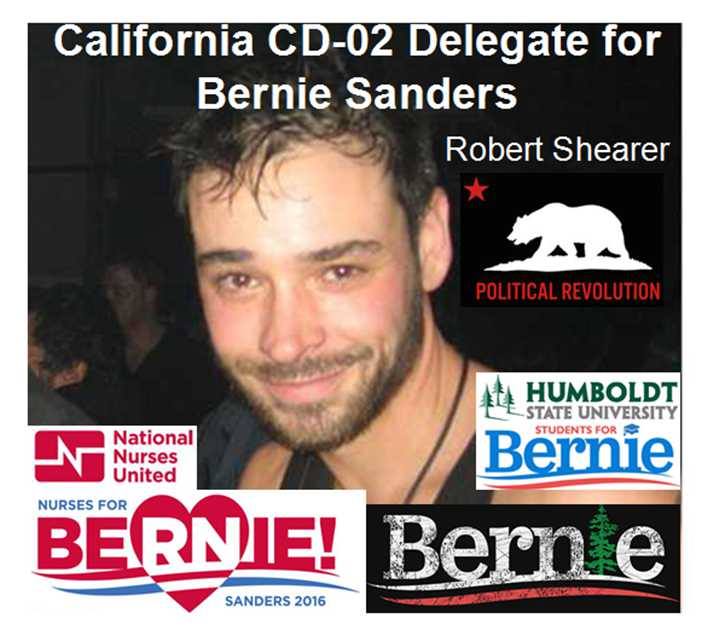 On Monday, a statement will be publicly released which has been signed by hundreds of Senator Bernie Sanders’ delegates and committee members in less than a week. It calls for all voting delegates to cast their votes at the Democratic National Convention for the strongest general election candidate.

Ten Sanders delegates will each briefly highlight an important position on a key issue of the political revolution which they do not feel the presumptive candidate or the Democratic Party establishment has truly embraced.

Hillary Clinton is *not* a strong general election candidate. According to recent polls, this may hold true now even more than it did before Sanders endorsed Clinton.

In very recent and reliable polls, Clinton is statistically tied to Donald Trump in key swing states like Florida, Ohio, and Pennsylvania. Swing state New Hampshire primary election exit polls, and many others over the last year, clearly demonstrate voter’s strong doubts in Clinton’s honesty and integrity. Sanders supporters are rushing to the Green Party while Jill Stein’s donations are up 1,000% since Sanders endorsed Clinton.

Meanwhile, Senator Bernie Sanders defeats Trump by double digits in almost all polls from the last several months. This is due to the Senator’s widespread popularity not just among the Democratic Party’s progressive voter base and those who have been disenchanted with politics for decades or their entire lives, but also among independent voters, Greens, Libertarians, and even Republicans, especially this year.

It is up to delegates to contest a nomination. Sanders delegates will make our cases to superdelegates as we have been for fifteen months, and to our counterparts, Clinton’s pledged delegates, at the Democratic National Convention and in the days leading up to it.

While Sanders delegates intend to work diligently towards influencing election rules and perhaps some platform minority reports at the convention, many of us have, by and large, *not* surrendered the nomination, and we anticipate a full role call vote of every state.

The struggle continues. We will all fight for the issues that we hold dear in the months and years ahead, largely unified by our work for the political revolution, but this primary isn’t over. We owe it to thirteen million voters and twenty three states to make a stand in Philadelphia.

Contesting the convention, even in the face of such likely defeat, is a statement of unified rejection of status quo politics that put profits before people and corporations before the climate.

We feel it is important that even in the face of immense pressure for the outward appearance of party unity that we continue to call for the social, economic, international, and environmental policies that families and the climate require immediately, not possibly sometime in the future.