Nurses at St. Joseph Hospital to Vote on Possible Strike Wednesday in Protest Over Planned Merger With Larger Catholic Nonprofit 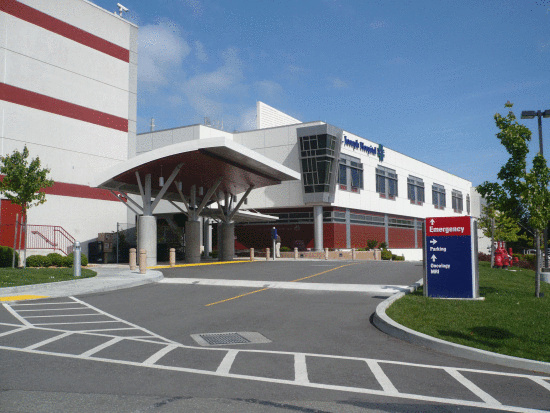 Late last month, the California Attorney General’s office approved a merger between Irvine-based St. Joseph Health, the Catholic nonprofit that operates St. Joseph Hospital in Eureka and Redwood Memorial Hospital in Fortuna, and Renton, Wash.-based Providence Health and Services, a union that will create the third-largest nonprofit health system in the country.

National Nurses United opposed the merger, arguing that it would have “a major impact on the cost, quality and availability of critical hospital services.” Now that the merger has been green-lit, the nurses’ union is planning a series of strikes votes on possible strikes at hospitals in the St. Joseph Health system, starting with one in Eureka Wednesday.

Here’s a press release from the group:

As two large, Catholic hospital chains—St. Joseph Health and Providence Health and Services—celebrate their official merger this week, nurses at three of the chains’ California hospitals are marking the alliance with a strike vote, California Nurses Association announced today.

“Nurses are seriously concerned about this merger being considered a reason to celebrate, when the reality, inside the hospitals—as evidenced by this week’s strike votes—is that the decision to merge falls short of defending the rights of RNs and patients,” said CNA Co-President Melinda Markowitz, RN. “Management has failed to address understaffing and other poor working conditions for too long.”

“We have chronic understaffing in Eureka that makes our hospital unsafe for patients and nurses,” said Lesley Ester, RN, of St. Joseph Hospital Eureka. “Nurses are voting to strike to make it clear to our hospital management, as well as to our new owners, Providence Health, that things need to change. Our community deserves better.”

Queen of the Valley, Napa—Thursday, July 7

“Queen’s RNs have waited long enough for our management to agree to a fair contract,” said Marylou Bahn, RN. “Since we started bargaining in 2013, we’ve lost more than 150 great nurses to hospitals that treat their nurses with the dignity and respect we all deserve. Our community deserves a hospital that recruits and retains the best nurses, and we hope our strong yes vote for a strike sends the message that RNs and our community are done waiting for a contract.”

“Our nurses are voting yes to give us the power to strike now because management refuses to address unsafe staffing issues, and also refuses to commit to keeping our benefits intact—which helps us retain the most experienced nurses for our patients,” said Lois Sanders, RN, of St. Mary’s Medical Center. “Nurses at Apple Valley deserve a contract that provides safer staffing and benefits that make us the employer of choice, not the employer of last resort.”

The merged system will eventually include some 40 hospitals operated by St. Joseph Health and Providence Health and Services, in California, Oregon, Washington, Alaska, Montana, New Mexico, and Texas.

CNA has been especially critical of the role of the St. Joseph system noting a sharp erosion of care standards, including inadequate staffing and insufficient supplies in St. Joseph hospitals, egregious violations of nurses’ rights, a weak commitment to providing essential services, and grossly inadequate levels of charity care.

The nurses have also objected to St. Joseph practices in investing patient care and tax subsidized funds into for profit companies, including hedge funds in the Cayman Islands. Both systems, for example, have reaped millions of dollars in tax subsidies from California taxpayers while providing among the lowest level of charity care as a percent of their operating expenses of any Catholic system.

Nurses have also cited widespread violations of the rights of nurses by St. Joseph that includes regular harassment and intimidation of RNs who want to advocate for improved patient care and working conditions. The National Labor Relations Board has found merit to more than a dozen unfair labor practices charges made by CNA and late last year issued a number of complaints against St. Joseph hospitals.

“St. Joseph Health is now among the worst violators of RN rights to advocate for their patients in the nation,” Markowitzsaid.

Corporate hospital mergers, like mergers in other segments of the health care industry, have done little to protect patients and communities. For the most part they have resulted in tacit or explicit endorsement of higher prices, and closures and other reductions in patient services, all while resulting in higher corporate profits.

Indeed, a recent University of Southern California study, as Los Angeles Times columnist Michael Hiltzik noted June 14, documented that similar hospital mergers “not only drove up prices everywhere their institutions were located, but allowed even nonaffiliated hospitals to charge more.”

“Experience suggests,” Hiltzik similarly wrote May 27, “that regulators can have only one response if they’re serious about protecting the public interest. Just say no.”

“CNA will continue to fight for nurses and patients in these communities,” Markowitz said. “Striking is always a last resort for RNs, who would prefer to be at the bedside, providing care. But our nurses know that they are duty-bound to advocate for their patients. We hope that, while management is marking their merger—they can find a way to listen to the serious concerns of nurses, who will be voting whether or not to strike this week, given that a lack of protections for patients and nurses is no reason to celebrate.”

Note: This post has been changed to clarify that nurses plan to vote on a possible strike.