McKinleyville Man Responds to Eviction Notice by Barricading Himself Inside Home » 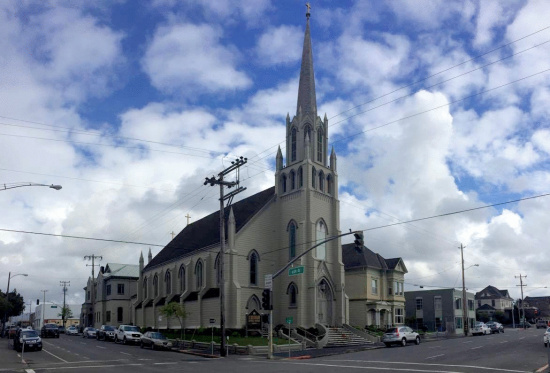 St. Bernard’s Catholic Parish on the corner of Sixth and H streets in Eureka, with the rectory next door. | Ryan Burns

In the dark pre-dawn of New Year’s Day 2014, Southern Humboldt man Gary Lee Bullock — freshly released from the Humboldt County Jail — spent more than five hours on and around the St. Bernard Catholic Parish property in Eureka. Today a jury watched much of his disturbing behavior as it was captured that night on grainy security camera footage.

Bullock is standing trial for torturing and murdering Father Eric Freed, as well as attempting to set the church rectory on fire twice and stealing Freed’s car.

The footage starts with Bullock calmly knocking on the front door of the church rectory, a Victorian-style house that served as Father Freed’s home. But as the hours wear on Bullock’s actions grow increasingly frenzied and erratic. At some point, witnesses today testified, Bullock broke into a side window to gain entry to the rectory, where there were no cameras. Exterior cameras catch Bullock leaving the property in Freed’s stolen car close to 7 a.m.

By that time, witnesses testified, Freed had been tortured and beaten to death, his body wrapped in liquor-soaked bedding.

Isaac and Perrone worked through the footage methodically, showing chronological clips to the jury on a large flatscreen TV. Often the screen was arranged in a grid pattern showing up to 12 different views from 12 different cameras, but Perrone cut to an individual camera’s view whenever that camera had picked up a clear shot of the action.

When Bullock first knocks on the rectory door it’s just after 1:44 a.m. He appears calm, knocking a few times, wiping his nose on his sleeve and milling around the front of the property. At roughly 1:55 a.m. a pair of headlights pulls into the parking area behind the rectory and a security guard emerges with a flashlight. But the guard doesn’t see Bullock, who’s on the other side of the building. The guard leaves.

Bullock walks back and forth along a walkway between the church and the rectory numerous times, stopping to check a side door, peering into a side window and generally wandering aimlessly. At about 2:10 a.m. two officers with the Eureka Police Department show up and talk to Bullock for several minutes. One of those officers, EPD Detective Amber Cosetti, testified today that Bullock told them he’d been arrested the previous night in Garberville, taken to the Humboldt County Jail and released after midnight. The officers saw “no red flags” in Bullock’s behavior, Cosetti testified, and so they escorted him off the property and directed him toward the Eureka Rescue Mission at 110 Second Street.

But after the officers left Bullock returned to the church property within minutes. Video shows him meandering back to the men’s and women’s bathrooms behind the rectory and entering the women’s room, where he remained for roughly 30 minutes.

When he emerges it’s close to 3 a.m., and at this point Bullock’s behavior goes from strange to menacing. The cameras follow him walking around the front of the rectory. He disappears around the far side of the building, and when he reappears — which happens in a split second due to the motion-activated camera technology — he’s holding an iron drainpipe roughly eight feet long and bent in the middle like an elbow.

Bullock carries the pipe around the side of the rectory to the concrete area outside the bathrooms and starts dumping a dark substance — possibly dirt — out one end of the pipe, forming a zigzag pattern. He then walks to a nearby landscaping area, barely visible in the video, and pulls a long wooden stake out of the dirt. He uses the stick to further shape the dirt he’s dumped on the cement, forming what looks like an inverted capital “A.”

At this point the security guard pulls up again, and this time he sees Bullock. But after a short encounter, Bullock wanders off, still holding the wooden stake in his hand, and the security guard leaves in the other direction. From 3:19 a.m. to 3:24 a.m. Bullock wanders around the property holding the wooden stake. At one point he stops at the side window, and while the footage is too grainy and dim to make out, Perrone testified, “That was the video of him [Bullock] breaking the window.”

After another stint in the bathroom — this one lasting 18 minutes according to Perrone — Bullock comes out with the stake, walks to the middle of a quad area between the church and the rectory and just stands there. The clip shown to the jury shows Bullock in silhouette, standing stock-still with the stake in his hand like an unused spear. Eventually he moves back to the side window.

Shortly after 4 a.m. the footage shows what prosecutors called “a flash of light and activity at the back window.” Bullock had gained entry to the rectory. Video from moments later shows Bullock running out the back door to the restrooms. He goes in and emerges with the bent iron pipe. He then jogs back to the rectory, enters the back door and shuts it behind him.

A slide on the flatscreen TV told the jury Bullock remained in the rectory for more than two hours.

Video shows him finally emerging at about 6:13 a.m. He slumps to the restroom and walks in, reemerges and slumps back through the back door of the rectory. At 6:49 a.m. the garage door behind the rectory partially opens. Lights flash inside. At 6:54 a.m. Bullock leaves the rectory for the last time, walks into the garage and climbs into Father Freed’s sedan, which he then pulls out of the garage and drives away.

In the afternoon, Deacon Frank Weber took the witness stand and testified about discovering Freed’s body later that morning. When Freed didn’t show up for the New Year’s Day mass, Weber walked over the the rectory looking for him. He went upstairs to Freed’s living quarters, pushing aside a Japanese curtain in the doorway and walking in.

“I saw a disheveled person laying on the floor under some blankets,” Weber testified. He didn’t immediately recognize that it was Freed, “but rather quickly [I] realized that something was terribly wrong,” he said.

It wasn’t until he knelt down and touched the body’s wrist that the deacon realized who it was, he said. He then went downstairs and called 9-1-1.

The remainder of the afternoon was filled with testimony from law enforcement officers who responded to the scene. Cosetti talked about her crisis intervention training, which served as preparation for identifying and dealing with people in mental crises, but said Bullock showed no signs of being in crisis.

On cross-examination, defense attorney Kaleb Cockrum pressed Cosetti about possible questions she hadn’t asked Bullock that night. He mentioned that the original call that came in to dispatch referred to a man “howling” and disturbing the peace.

Cosetti reiterated that the interaction was not out of the ordinary and Bullock didn’t seem to be in crisis.

EPD officer Ben Omey described the scene he came across when he entered the rectory. He smelled natural gas and, after being directed to the kitchen, found a lit burner with a lit cigar just inches away.

Former EPD Senior Detective Todd Wilcox, who is now a part time deputy with the Humboldt County Sheriff’s Office, described the signs of forced entry he found on the property, including a broken gate along the side of the rectory (where the iron pipe was taken) and the broken window on the other side.

Wilcox identified the subjects of numerous photos taken at the scene, and that wrapped up the day’s testimony. The trial is scheduled to continue Tuesday at 8:30 a.m.