KINS Asks: Can a Woman Actually Be President of the United States? 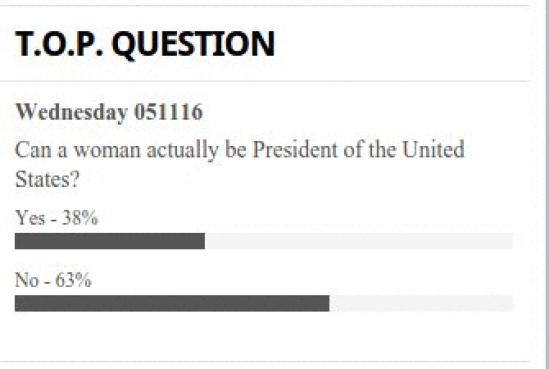 Can a woman actually be president of the United States?

Um: No. Not actually.

But if you have an informed legal opinion on this question, our friends at KINS Radio — home of Limbaugh, Levin and Golden State Warriors basketball — would like you to get yourself over to their webpage to make your voice heard!

Bad news for the gals: The proposition currently stands at two-thirds against. And that is because girl presidents are clearly unconstitutional, and no one wants one anyway.

But that doesn’t stop crabby Cathies from getting all huffy about stuff!

@LCStansberry You’ve been watching too much Stephen Colbert, Boysenberry. The reason is cooties.